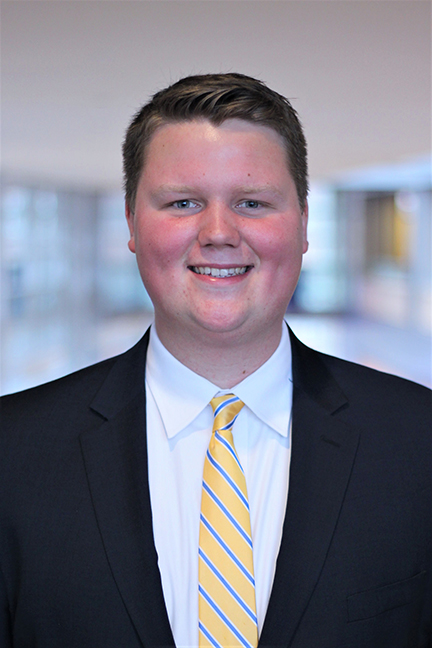 Jon McKellar of Exton, Pennsylvania, will be honored as the student marshal for the Eberly College of Science during Penn State University’s summer commencement ceremonies on Saturday, August 11, 2018, on the University Park campus. McKellar’s faculty escort for the commencement exercises will be Cheryl Hile, teaching professor and coordinator of undergraduate advising in mathematics at Penn State.

McKellar will graduate with a 4.0 grade point average and bachelor’s degrees in mathematics and economics. He was a Schreyer Scholar in Penn State's Schreyer Honors College and a member of the Dean's List for every semester at Penn State. McKellar’s honors and awards while at Penn State include the President’s Freshman Award in 2016, the President Sparks Award in 2017, and the Steven and Sherry McCrystal Scholarship in 2017.

“I’m very excited for the opportunity to represent the college of science at commencement,” said McKellar. “The mathematics department has been a wonderful home for me over the last three years, and the faculty has formed my experience here.”

While at Penn State, McKellar conducted research with Russell Chuderewicz, teaching professor of economics and with Lingzhou Xue, assistant professor of statistics. With Chuderewicz, McKellar worked on econometric time-series analysis through a paid research program in 2016 with Bates White Economic Consulting. He also completed his honors thesis on weak and semi-strong form U.S. market efficiency throughout the financial crisis with Chuderewicz. With Xue, McKellar worked on improving estimation of sample covariance matrices of stocks to improve portfolio selection and reviewed literature on deep learning and neural networks.

In addition to his academic achievements, McKellar was vice president of Alpha Kappa Psi, a professional co-ed business fraternity founded in 1904 with the purpose of developing its members into principled business leaders.

McKellar is currently completing an internship as a summer business analyst at McKinsey & Company, a global management consulting firm. After graduation, he will begin his fulltime career at McKinsey.

“One of the most important lessons I learned during my time at Penn State is that everyone is capable of much more than they think,” said McKellar. “It is your own responsibility to push yourself and find your own limits. Failing to do so is doing yourself a disservice by settling.”

McKellar, a graduate of West Chester East High School in Exton, Pennsylvania, will be accompanied at commencement by his mother, Linda McKellar; his father, Steve McKellar ‘16; his brother, Brian McKellar ‘17; and his girlfriend, Kaitlin Kohut.