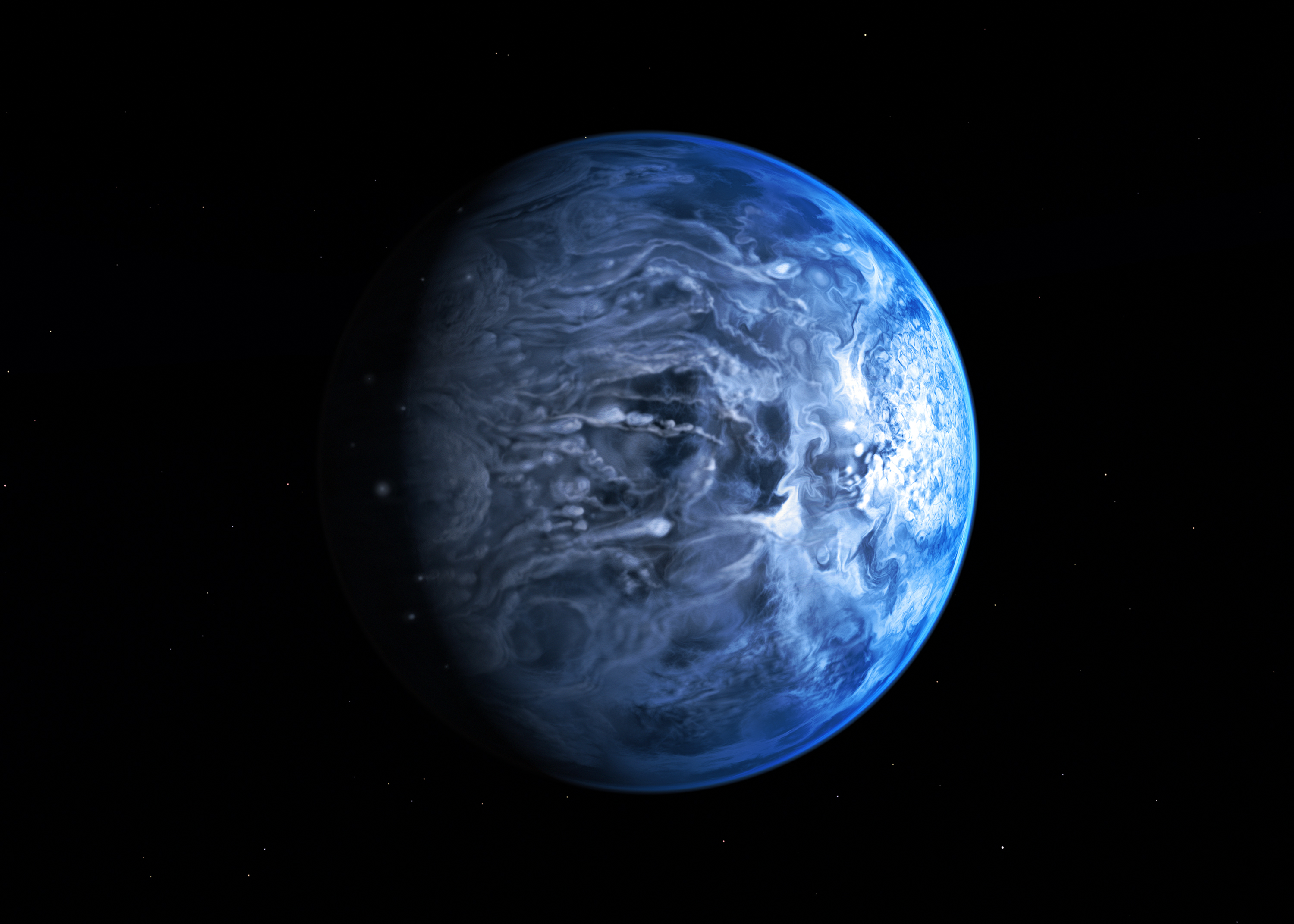 Artist's conception of a planet covered with a global ocean. A new study finds that these water worlds could maintain stable climates and perhaps sustain life. Credit: ESO/M. Kornmesser

“Water world” planets, those covered with a deep global ocean, could maintain surface conditions similar to that of the Earth for over a billion years, according to a new paper from the University of Chicago and Penn State.

Life has thrived on Earth for billions of years, despite substantial changes in the luminosity of the sun and the composition of Earth’s atmosphere. Scientists attribute the long-term habitability of the Earth to the cycling of minerals and gasses between Earth’s atmosphere, oceans, and mantle through processes such as volcanism and plate tectonics. Thus, much of the scientific community has assumed that geochemical cycling is a prerequisite for the evolution of advanced life on another planet. A deep global ocean is expected to prevent the cycling of minerals and gases that keeps the climate stable on Earth, and thus such planets were previously presumed unlikely to support the evolution of advanced life.

However, a new study, published August 31, 2018 in The Astrophysical Journal, found that ocean planets could stay in the “sweet spot” for habitability for over a billion years, much longer than previously assumed. The authors based their findings on more than a thousand simulations that model the formation of the rocky planets and how the temperature and chemistry of oceans and atmospheres change with time.

“This really pushes back against the idea you need an Earth clone—that is, a planet with some land and a shallow ocean [to sustain life],” said Edwin Kite, assistant professor of geophysical sciences at UChicago and lead author of the study.

“Planet formation models predict that most rocky planets would be quite different than the Earth,” said Penn State Professor of Astronomy and Astrophysics, Eric Ford, a co-author of the study. “For example, many rocky planets are expected to harbor much more water than the Earth and be covered in a deep global ocean.” Ford’s research group uses powerful computers at the Penn State Institute for CyberScience to simulate the formation of planetary systems.

“While astronomers have discovered thousands of small planets that orbit stars beyond the sun, present observations are not able to detect the ocean of a rocky planet, even if its ocean were hundreds of miles deep,” said Ford. Such discoveries are inspiring new research into how life could potentially survive on other planets, some of which are very different from Earth—some may be covered entirely in water hundreds of miles deep. “In order to understand the implications of a global ocean for a planet’s climate and habitability, our research groups teamed up to see how much water is delivered to rocky planets and to track carbon dioxide as it moves between the planet’s ocean, atmosphere, and rocks in a planet’s early years.”

If life on other planets follows a trajectory similar to that of Earth-life, then other planets would need to maintain a stable climate with habitable surface conditions for billions of years before life would transform its atmosphere to an extent that would be detectable by next-generation astronomical observatories, let alone evolve intelligence. When evaluating which planets are most promising to search for signs of life, scientists usually look for planets that have both water and a stable climate. The processes that help regulate Earth’s climate over very long timescales wouldn’t work on a water world, due to deep water covering the rock and suppressing volcanoes.

Ford and Kite wanted to know if there was another way. Given the highly chaotic process of planet formation, they conducted thousands of simulations, tracking the amount of water and evolution of the rocky planets’ climates over billions of years. “These simulations suggest that water world planets could remain habitable for over a billion years, even without geochemical cycling or plate tectonics, like we have on Earth”, said Ford.

The simulations in this study focused on stars that are like our own, but the results are also optimistic for planets orbiting low-mass, red dwarf stars. “The Habitable Zone Planet Finder , built at Penn State’s Center for Exoplanets and Habitable Worlds, recently began searching for low-mass planets around red dwarf stars. The planets it discovers and characterizes will be among the best candidates to search for biosignatures.” said Ford. “This study suggests that water worlds orbiting red dwarf stars might also have a stable climate, even without geochemical cycles, potentially giving life on these planets time to create atmospheric biosignatures that could be detected by future space missions.”

The funding for this research was provided by NASA, the U.S. National Science Foundation, Penn State, the Penn State Eberly College of Science, and the Pennsylvania Space Grant Consortium. Computational resources were provided by the Penn State Institute for CyberScience and the University of Chicago’s Research Computing Center.