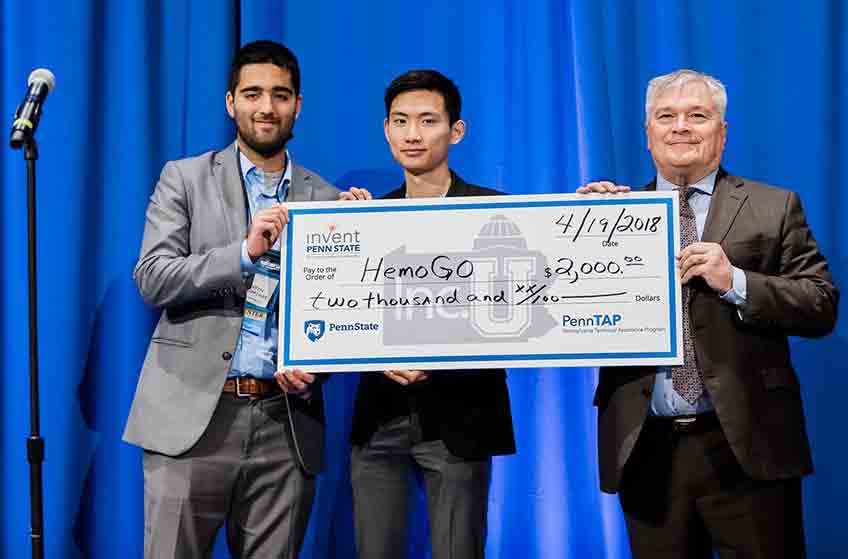 The final year of college is a mix of emotions for most students: There is the joy and anticipation of completing a degree, often offset by the anxiousness and uncertainty of the future. Where will you work? What graduate school will accept you? Will you get into medical school?

Two Penn State seniors who don’t share that uncertainty are Sherveen (Shevy) Karbasi ’19 Bio and Matthew Chen ’19 Bio. Karbasi and Chen are the founders of Moichor—a startup company that has developed a smartphone application, which, combined with a proprietary test-strip reader, provides a complete blood count (CBC) test that can be done at home and then sent electronically to health-care professionals. The other partners in Moichor are Steve Flanagan ’19 Bio and Ph.D. candidate Thanh Le ’19 IST.

Moichor, formerly HemoGo, was the brainchild of Karbasi, who saw the need for a more-convenient way of getting blood counts.

“I was doing an internship at Massachusetts General, and I saw health-care workers taking vial after vial of blood, and it was really annoying to the patient,” said Karbasi. “I saw this was a problem and thought there had to be a better way.”

He saw the solution in artificial intelligence (AI) and the potential of training algorithms to differentiate between red blood cells, white blood cells, and platelets. This, combined with an optical attachment for a cell phone and a chip to analyze the blood, would become the core of the Moichor solution.

“Our primary audience would be chemotherapy patients who need to monitor for white blood cell counts and who need to go to a clinic to do this. Now they can do it at home,” Karbasi said as he explained the future potential of Moichor, including how it could be used by emergency services providers as they transport a patient to the hospital.

The potential of Moichor was validated last May as Karbasi, Chen, and their partners bested five other teams who pitched their innovations to a panel of judges for the WPSU-TV show The Investment, a Shark Tank–like show where Penn State students compete for part of a $30,000 prize. In past years, The Investment’s winners split the winnings; but this year, Moichor was awarded the entire amount—which they added to an earlier award of $2,000 they received from the Invent Penn State initiative to help move their innovation forward.

And moving their product forward is how they are using their winnings. “The success of these types of products is iteration. The more you iterate, the better refined your product is,” said Karbasi, who indicated that Moichor has no plans to be bought out by someone. Rather, their business plan is to pursue the full potential of Moichor on their own.

“We built this company to outlive us. When we die, our company will continue. That’s a real motivator for us,” said Karbasi, adding, “We might consider an IPO, but we want to remain with this business.”

Both Chen and Karbasi have been spending time in San Francisco—where they plan to relocate after they graduate, to take advantage of the incubators and accelerators the Bay Area has to offer.

“I’m not as nervous [as other seniors], because I can control things based upon the amount of effort that I have put into this,” said Karbasi. “It would hurt more if I never tried this.”

Look for Moichor to move on from winning entrepreneurial competitions to winning FDA approval for their inventions and entering the burgeoning self-service medical device industry.