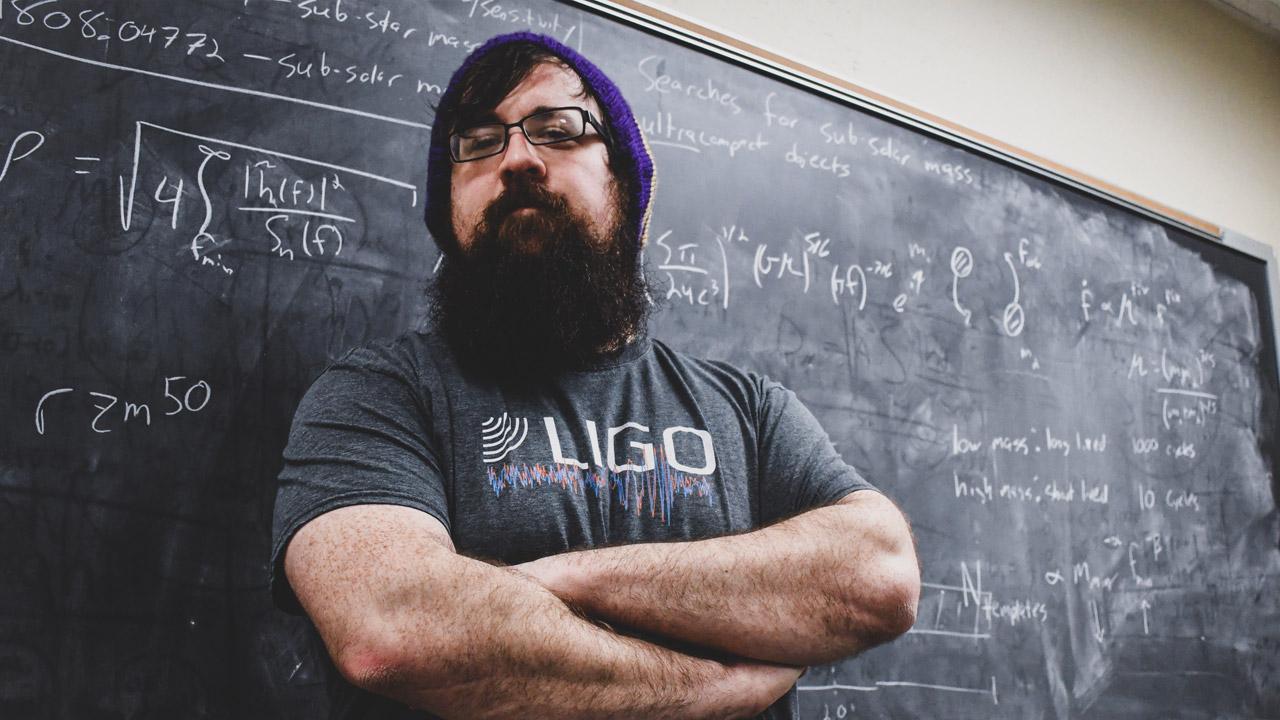 Although Cody Messick was always fascinated by the night sky and the universe, he didn’t start his collegiate career studying the cosmos.

As an undergraduate at the University of Washington, Cody studied cellular biophysics and the mechanisms of antibiotic resistance. “I worked on the computational end,” he says, “things like modeling and running simulations. But I just kind of fell into it; it was the research I found.”

When it came time to try to prove his simulations in bench-top experiments—starting with preparing sample slides for analysis with a super-resolution microscope—Cody began to realize that maybe doing biophysics research wasn’t his calling in life. “It’s definitely not an exaggeration to say that I made at least a hundred slides over the course of six months,” he says. “They were really small slides and you had to make them in just the right way. Out of those hundreds of slides, there were maybe two that actually turned out, because I was so bad at it; there would be a smudge, and the slide wouldn’t be usable.”

As an officer in the Society of Physics Students at UW, Cody had organized a field trip to the LIGO detector in Hanford, Washington, just a few hours away. “I had no idea what it was,” he says with a laugh. “Somebody asked me, ‘What’s LIGO?’ I had it memorized; I said, ‘It’s a laser interferometer gravitational-wave observatory, of course.’ Then they asked, ‘Well, what’s a gravitational wave?’ And I said, ‘I have no idea; let’s go find out!’”

Touring the Hanford detector, Cody was instantly hooked. “I was super fascinated by it, just sucked in right away,” he says. “So it was always in the back of my mind that it would be cool to do something with LIGO.”

Later, while exploring graduate schools, Cody visited Penn State—still planning to continue his studies in biophysics. “But shortly after that,” he recalls, “I started to have this epiphany. I just didn’t like the biology aspect; I liked the computer aspect. And I realized that I should be doing research in a field I’ve always been interested in—astronomy and astrophysics—instead of making myself do biophysics just because it was the first research position I found as an undergrad.” Cody had heard of AMON—“I thought that was really cool,” he says—so he reached out to a few of the faculty. “They said, ‘We’d love to have a grad student. The only problem is we don’t have any funding yet.’ They asked, ‘Is there a specific group like IceCube or LIGO or something else that you’d like to join, and then you could be our liaison?’” Cody mentioned that he was interested in LIGO. “And it just so happened that Chad Hanna had recently been hired and needed students, so they set up a meeting for me with Chad and I ended up doing LIGO research with him.”

When LIGO made its revolutionary discovery, in August 2017, of a gravitational wave from a binary neutron star merger, Cody was running the collaboration’s data analysis that detected the signal, and he also sent the alert notifying the LIGO collaboration. “It’s impossible to say that I was the first person to see it, but I was the first person to really notice it,” he says. “It was one of those things that as soon as you saw the data—because you can literally see the gravitational waves in these plots that we make—as soon as I saw that, I was like, ‘Oh, baby, that’s it!’”

To boot, the discovery was made at LIGO’s Hanford detector, in Cody’s home state of Washington. “I’ve got to be proud of that!” he chuckles.

And Science magazine even featured Cody and his contributions to the discovery in its 2017 “Breakthrough of the Year” writeup. “It was kind of a surreal experience,” he says. “I wish I had something more profound to say about it, but—it was just a cool experience.”