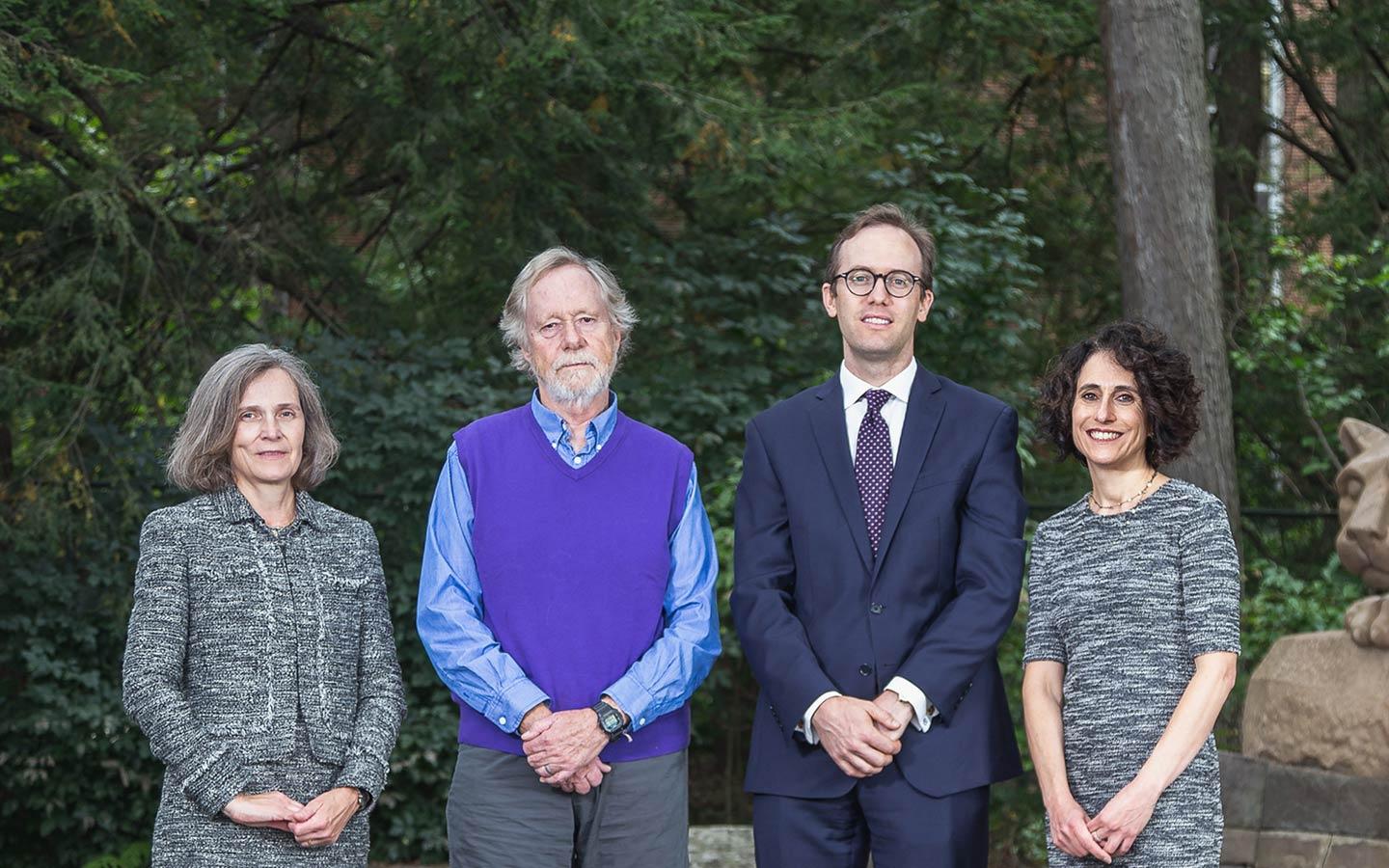 News and Research Spotlights
The Eberly College of Science honored four alumni with the Outstanding Science Alumni Award for 2018 during an event held on the University Park campus on October 5, 2018
Gail McCormick

The Board of Directors of the Eberly College of Science Alumni Society established this award to recognize alumni who have a record of significant professional achievements in their field and who are outstanding role models for students in the college. The following alumni received the 2018 award: 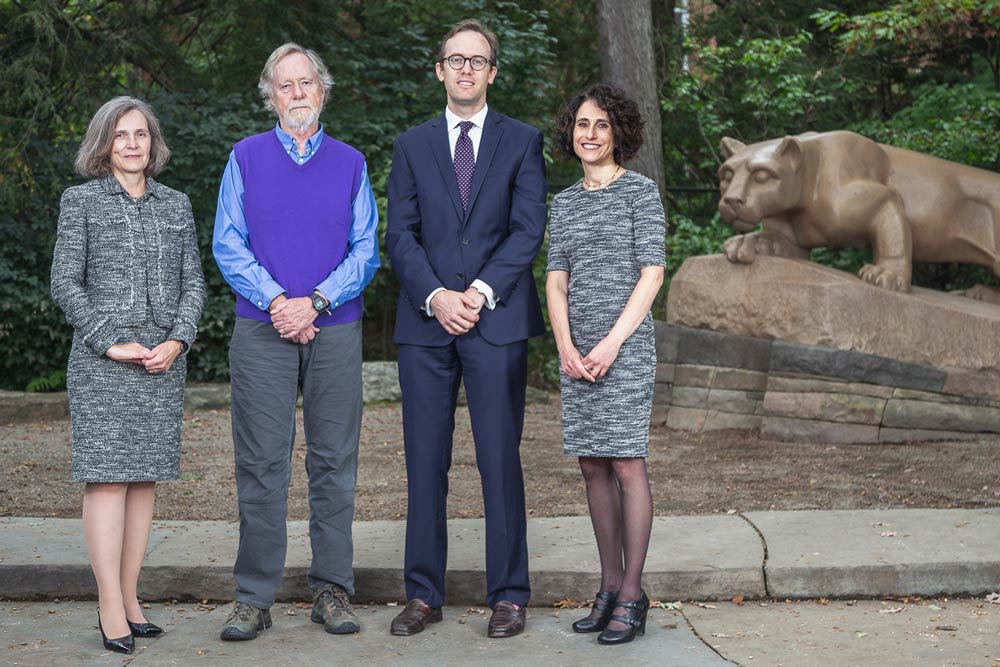 Fred Allendorf is a Regents Professor Emeritus of Biology at the University of Montana. He has spent his career as an evolutionary geneticist applying the theory and molecular techniques of population genetics to problems in conservation. Much of his research has focused on understanding the genetics of salmonid fishes after a whole-genome duplication event, which resulted in fish with extra copies of their genome (tetraploidy). Allendorf’s work in fish genetics began while he was an undergraduate student at Penn State in the laboratory of James E. Wright, professor of genetics from 1949 to 1983 and professor emeritus of genetics from 1983 to 1997.

Allendorf was program director of population biology at the National Science Foundation from 1989 to 1990. He was elected Fellow of the American Association for the Advancement of Science (AAAS) in 1987 and elected president of the American Genetic Association in 1997. He received the American Fisheries Society’s Award of Excellence in recognition of outstanding contributions to fisheries science and aquatic biology in 2011 and the Molecular Ecologist’s Molecular Ecology Prize for lifetime achievements in the fields of molecular ecology and conservation genetics in 2015. Allendorf is senior author of the book Conservation and the Genetics of Populations and has written several papers that unite the sciences of ecology and evolution with the spiritual practice of Zen in order to inspire actions to address the extinction crisis currently facing the planet.

Nick Hartman is a partner at CKM Advisors, a developer of data science solutions for Fortune 500 clients with offices in New York and London. Hartman and the team at CKM utilize digital empirical measurements and analytics to detect and improve process efficiency, employee productivity, and resource utilization while also providing a data-driven approach toward assessing and reacting to operational risk. These insights enable CKM’s clients to incorporate advanced data-driven decision-making and automation into their daily operations.

Before the launch of CKM, Hartman started his career at OC&C Strategy Consultants, a global strategy consulting firm. His expertise and experience in the rapidly growing field of data science, especially as it pertains to large enterprise data environments and the complex processes that generate those data, have allowed Hartman to improve the efficiency and effectiveness of business operations for a variety of clients.

Hartman’s research, including that conducted while an undergraduate at Penn State and while at Cambridge and the Woods Hole Oceanographic Institution, frequently took advantage of proteomics, or the study of proteins. He developed a technique to screen for undiscovered protein complexes and also explored the molecular composition of colored, dissolved organic matter in sea water, which absorbs sunlight, potentially limiting the amount of sunlight available to other organisms.

After receiving a bachelor’s degree in chemistry from Penn State in 2003, Hartman completed a doctoral degree in biochemistry at Cambridge University in 2008 as a Marshall Scholar, one of the most prestigious graduate scholarship opportunities for U.S. citizens.

Alexandra S. Heerdt is an attending breast surgeon on the Breast Service at Memorial Sloan-Kettering Cancer Center (MSKCC), where she has worked since 1992. She is also an associate professor of surgery at Weill Cornell Medical College.

Over the past 25 years, Heerdt has worked to improve the healthcare management of women at high risk for breast cancer as well as those undergoing surgery. She was the principal investigator for a drug trial that demonstrated the impact of the compound tamoxifen, a drug that is now used in the prevention of breast cancer. She also was actively involved in studies evaluating the role of a procedure for the evaluation of lymph nodes, called sentinel node biopsy, which has become the standard of care. Most recently, she has served on committees to improve quality of care and safety at MSKCC and to evaluate patient-reported outcomes—reports of a patient’s health condition that come directly from the patient rather than being interpreted by a clinician or others.

Heerdt has maintained a clinical practice and has been named a Best Doctor in New York for more than 15 years. She has also been named a Best Doctor in the United States for Breast Cancer Surgery by Castle Connolly and a Compassionate Doctor by MSKCC. She is actively involved in the education of surgical fellows and teaches surgical management of breast diseases as well as communication strategies to improve patient satisfaction.

Danielle Pasqualone is the vice president of intellectual property at Five Prime Therapeutics, Inc., a clinical-stage biotechnology company focused on discovering and developing innovative immuno-oncology protein therapeutics, which use the body’s own immune system to fight cancer. As the leader of the Intellectual Property Group, Pasqualone directs global patent strategy and provides strategic counsel on collaborations and licensing transactions.

Pasqualone’s work protecting intellectual property in the biotechnology industry helps promote innovation in both basic research in molecular and cell biology and drug development. She worked for nearly 12 years at Genentech, Inc., one of the foremost biotechnology and drug-development companies in the world, where she worked with distinguished scientists and pioneers in the biotechnology industry on programs ranging from basic research to clinical trials and commercialization. She also helped enable partnerships between industry and academic/nonprofit institutions to support collaborative, translational research. Her work on intellectual property matters contributed to newly developed treatments in oncology, which are providing groundbreaking, effective therapies for breast cancer.

As an undergraduate at Penn State, Pasqualone’s research helped define a class of movable genetic elements—genetic material that can move around within the genome—implicated in gene regulation and disease in mammals. Her doctoral research at Cornell University focused on a component of the machinery that segregates genetic material into the two daughter cells that result from cell division, and her postdoctoral research at the University of California, Berkeley, focused on chromosome dynamics during cell division. Pasqualone then shifted gears to a career in intellectual property and earned a doctor of jurisprudence (J.D.) at the Boalt Hall School of Law at the University of California, Berkeley, in 2003.