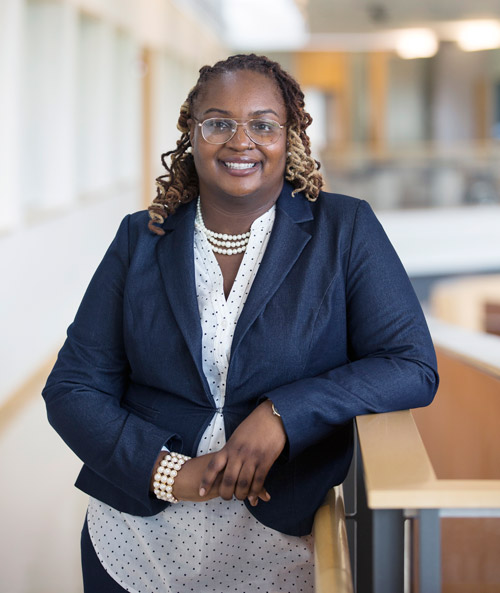 Melanie McReynolds, an alumna of the Biochemistry, Microbiology, and Molecular Biology graduate program at Penn State and now a postdoctoral scholar at Princeton University, is among the 15 outstanding early career scientists selected by the Howard Hughes Medical Institute (HHMI) as Hanna Gray Fellows in 2018.

Each Fellow will receive up to $1.4 million in funding over eight years, with mentoring and active involvement in the HHMI community. In this two-phase program, fellows will be supported from early postdoctoral training through several years of a tenure-track faculty position.

“As a Ph.D. candidate, Melanie was a joy to mentor because of her energy, creativity, and determination,” said her former adviser, Wendy Hanna-Rose, professor and head of the Department of Biochemistry and Molecular Biology. “She pioneered in my lab by expanding our capabilities in metabolomics analyses and completed an impressive thesis where she established distinct biological roles for each of the NAD biosynthetic pathways. She chose to continue her studies of NAD metabolism as a postdoctoral fellow, and her receipt of the elite HHMI Hanna Gray Fellowship is evidence of her outstanding potential as well as a significant resource that will ensure her future success. Melanie has always been dedicated to building an outstanding independent research program, and she is specifically passionate about inspiring and motivating other young scientists to aim high. With her receipt of the Hanna Gray Fellowship, she is in a position to achieve both goals. I look forward to many future impressive accomplishments from Melanie.”

McReynolds currently works with Joshua Rabinowitz in the Lewis-Sigler Institute for Integrative Genomics at Princeton. Her work focuses on the molecule NAD+, required by every living cell. Low levels of the molecule have been linked to aging and a wide range of diseases, including type-2 diabetes, Alzheimer’s, and cancer. Using sophisticated tools that can track the molecule’s metabolic origin and fate, McReynolds aims to identify how NAD+ is produced and consumed, in order to clarify—and someday counter—the causes of diseases and aging.

HHMI’s Hanna H. Gray Fellows Program seeks to encourage talented early career scientists who have the potential to become leaders in academic research. In particular, this program aims to recruit and retain emerging scientists who are from gender, racial, ethnic, and other groups underrepresented in the life sciences, including those from disadvantaged backgrounds.

The program is named for Hanna Holborn Gray, former chair of the HHMI trustees and former president of the University of Chicago. Under Gray’s leadership, HHMI developed initiatives that foster diversity in science education. HHMI continues to carry forward this work on college and university campuses across the U.S.