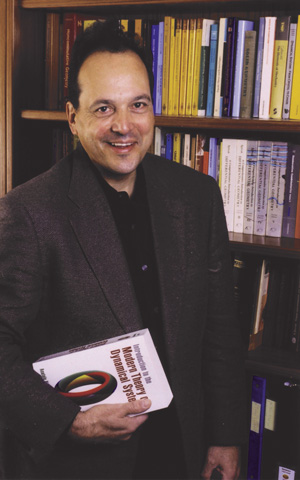 Does the flap of a butterfly’s wings in Brazil set off a tornado in Texas? This question posed by the American mathematician Edward Lorenz attempted to explain the idea that small things can be the catalysts for major events. This idea was popularized in the 1992 bestseller Complexity: The Emerging Science at the Edge of Order and Chaos. However, decades prior to the book’s popularizing the study of complexity and its companion, chaos theory, academics had been working to explain how such things as weather events, economic cycles, or disease outbreaks could be predicted or explained mathematically. The goal of this research was to obtain precise knowledge of how systems work that would eventually make them perfectly predictable. This theoretical exploration of real-world events is called the study of dynamical systems.

For Penn State, the butterfly first flapped its wings in Moscow, setting off a tornado of mathematical greatness in University Park in the name of Anatole Katok. Katok, who was hailed as one of the giants in his field, died April 30, 2018. To preserve his legacy, three of his former students have made separate gifts to endow a chair in mathematics and a center in mathematics in his name. Michael Brin’s gift of $2 million fully endowed the Anatole Katok Chair in Mathematics. Brin, Serge Ferleger, and Alexey Kononenko together established the Katok Center in Dynamical Systems and Geometry, through individual gifts of $225,000; $225,000; and $200,000 respectively.

Katok’s life story is as compelling as his life’s work. He was Russian, but having been born in Maryland to two Russian scientists assigned to the Russian delegation to the United States during the Second World War, he justly claimed that he was eligible to be U.S. president. After the war, his parents returned to Moscow, where Katok excelled in mathematics. But the anti-Semitism of Cold War Russia limited his academic potential. In 1978, Katok, with his mathematician wife, Svetlana, and their two children, immigrated to the United States. During his lifetime, he held professorships at the University of Maryland and the California Institute of Technology in addition to Penn State. He was the dissertation advisor to more than 40 doctoral students, including Michael Brin, Serge Ferleger, and Alexey Kononenko, who created and endowed the chair and center in Katok’s name.

Brin, professor emeritus of mathematics at the University of Maryland, is an expert in the field of dynamical systems and Riemannian geometry. He was a pupil of Katok in Moscow and established the Michael Brin Prize in Dynamical Systems, an international prize for outstanding work in the theory of dynamical systems and related areas. Following Katok’s death, Brin endowed a similar prize at Penn State for outstanding young mathematicians in Katok’s field of study.

“Anatole was an extraordinary academic and contributed great value to his profession,” said Brin. “Through these gifts, Alexey, Serge, and I hope to honor his outstanding legacy by supporting faculty members who will continue the research and teaching to which he devoted his life.”

Kononenko and Ferleger were also advisees of Katok and received their doctoral degrees from Penn State in 1996 and 1998, respectively.

“In losing Anatole, we have lost a brilliant colleague and a leader in the field of dynamical systems,” said Douglas Cavener, Verne M. Willamen Dean of the Eberly College of Science. “We will remember Anatole for his monumental contributions to mathematics, the expanse of his intellect across the arts, history, and sciences, and the care he took in mentoring the next generation of mathematicians.”

The Anatole Katok Chair in Mathematics will support outstanding faculty members who are leaders in the study of dynamical systems. The Anatole Katok Center in Dynamical Systems and Geometry will provide a range of programming in this mathematical field, with the intention of propelling cutting-edge mathematical research for years to come.