Jinchao Xu Elected a Fellow of the European Academy of Sciences 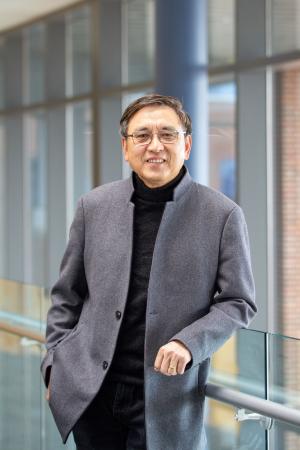 Jinchao Xu, Verne M. Willaman Professor of Mathematics and Director of the Center for Computational Mathematics and Applications at Penn State, has been elected as a Fellow of the European Academy of Sciences. He was elected for contributions to the field of computational mathematics and machine learning, particularly for his development and analysis of finite element, multigrid, and other numerical methods for partial differential equations.

Xu is an expert on numerical methods for partial-differential equations that arise from modeling scientific and engineering problems. His work ranges from studying fundamental theoretical questions in numerical analysis to developing and applying numerical algorithms for practical applications. He has made many groundbreaking contributions in developing, designing, and analyzing fast methods for solving large-scale issues that arise from the discretization of partial-differential equations. Recently, he has devoted himself to mathematical studies of deep learning, working on topics such as approximation theory of deep neural networks and development of convolutional neural networks and training algorithms from viewpoints of multigrid and the method of subspace corrections.

Xu is known for a number of theories and algorithms that bear his name. For example, the Bramble-Pasciak-Xu (BPX) preconditioner is an algorithm that is now one of the two most fundamental multigrid approaches for solving large-scale discrete partial-differential equations, the Hiptmair-Xu (HX) preconditioner is one of the most efficient methods for solving Maxwell's equations that form the foundation of modern electrical and communications technology, and the Xu-Zikatanov (XZ) identity is a basic technical tool that can be used for the design and analysis of a wide range of iterative methods such as multigrid method and the method of alternating projections. Several of the theories and algorithms he has developed have had a major impact on the field of numerical methods for partial differential equations; for example, the HX preconditioner was ranked as one of ten notable breakthroughs in computational science in recent years by the U.S. Department of Energy in 2008.

Xu has published more than 230 scientific papers. He was an invited speaker at the International Congress for Mathematicians in 2010 and a plenary speaker at the International Congress for Industrial and Applied Mathematics in 2007. Other awards and honors include the Humboldt Award for Senior U.S. Scientists in 2005 and the first Feng Kang Prize for Scientific Computing in 1995. Xu is a Fellow of the Society for Industrial and Applied Mathematics (SIAM), the American Mathematical Society (AMS), and the American Association for the Advancement of Science (AAAS).

The European Academy of Sciences (EURASC) is a non-profit non-governmental, independent organization of the most distinguished scholars and engineers performing forefront research and the development of advanced technologies, united by a commitment to promoting science and technology and their essential roles in fostering social and economic development.  More information can be found at the EURASC website.