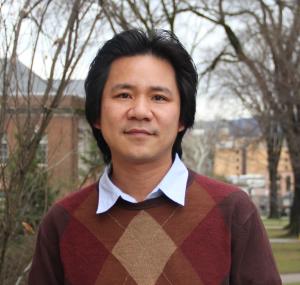 Toan T. Nguyen, professor of mathematics at Penn State, was honored with the T. Brooke Benjamin Prize at the 2022 Society for Industrial and Applied Mathematics (SIAM) Conference on Nonlinear Waves and Coherent Structures (NWCS22). The SIAM Activity Group on Nonlinear Waves and Coherent Structures awards the T. Brooke Benjamin Prize every two years to a mid-career established researcher for outstanding recent work on a topic in nonlinear waves.

Nguyen received the prize in recognition of his extensive and deep contributions to the mathematical theory of the dynamics of gas and fluids. In particular, the award recognizes his original contributions to the understanding of the stability of shear flows and Prandtl layers. In the 2016 paper cited in the nominations for the prize, Nguyen introduced innovative techniques to put the surprising phenomenon known as viscous destabilization, which had been observed experimentally but not understood mathematically, on a rigorous footing. His contributions extend beyond this to a wide range of problems in the field and his current research interests include hyperbolic and dispersive partial differential equations, fluid dynamics, kinetic theory, and general relativity.

“I am grateful to SIAM for the recognition of my research in fluid dynamics and plasma physics,” said Nguyen. “The research done provides the foundation to many natural directions for future research in fluid dynamics and kinetic theory. It also highlights the rich underlying physics and the complex mathematical subtleties in understanding the dynamics of a fluid and a plasma, which I hope will attract more students and researchers to the field.

Nguyen joined the faculty at Penn State in 2013 as an assistant professor and was promoted to associate professor in 2018 and to professor in 2022. Prior to that, he was Prager Assistant Professor at Brown University from 2010 to 2012 and a postdoctoral fellow at Université Pierre et Marie Curie in France from 2009 to 2010. Nguyen earned a bachelor’s degree at Vientnam National University at Hochiminh City in 2002, a master’s degree at the University of Texas at San Antonio in 2006, and a doctoral degree at Indiana University in 2009.