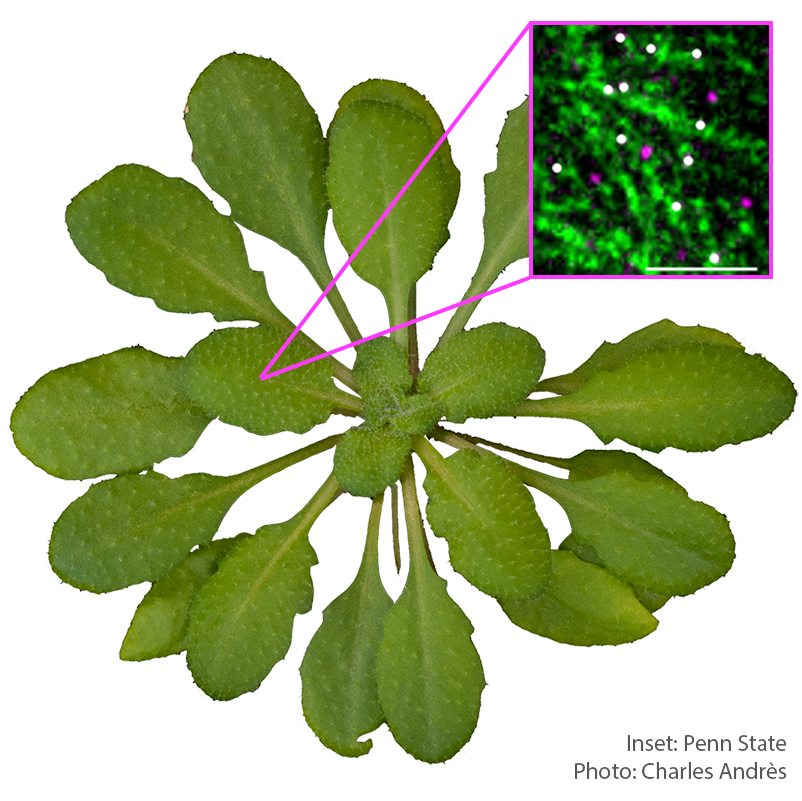 Using the model plant species Arabidopsis thaliana, also known as thale cress, a team of researchers from Penn State have identified the main proteins that prepare plants to create cellulose – a compound used in a variety of manmade materials. The proteins cellulose synthase interactive 1 and PATROL1 associate with each other (inset) and may contribute to how quickly the cellulose synthase complex, a grouping of different proteins known to be involved in the synthesis of cellulose, reaches the location where cellulose is made. Credit: photo Charles Andrès; inset Penn State.

A comprehensive look at how plants build cellulose, the primary building block of the walls of most plant cells that is used in a wide variety of manmade materials, could have important implications for its use in biofuels. Researchers at Penn State have identified the major steps in the process as well as the tools used by plant cells to create cellulose, including proteins that transport critical components to the location where cellulose is made. A paper describing the study appears online the week of March 26, 2018, in the journal Proceedings of the National Academy of Sciences.

“Cellulose is the single most abundant biopolymer on earth,” said Ying Gu, associate professor of biochemistry and molecular biology at Penn State and senior author of the paper. “It makes up about 95 percent of paper and 90 percent of cotton, and its derivatives are even in the emulsifiers in ice cream. In the past ten years or so, cellulose has also been considered as a major component of biofuels. Understanding how cellulose is synthesized may allow us to optimize its use as a renewable energy source.”

The cellulose within many of the products used in everyday life is primarily produced by plants. Despite the economic significance of cellulose, prior to this study researchers only had a basic understanding of how plants create this abundant resource.

“We knew that cellulose is synthesized in the plasma membrane that surrounds plant cells within a heteromeric protein complex -- a grouping of different kinds of proteins -- called the cellulose synthase complex, and that the main component of this complex is a unique cargo protein called cellulose synthase,” said Gu. “But we didn’t know if other proteins are involved in the complex, or how the proteins get to the plasma membrane. To start answering these questions, we used a combination of approaches, including cell imaging, functional genetics, and proteomics, to create a timeline of events and to identify the main proteins involved in preparing the cell for synthesis.”

“We knew that the exocyst complex is evolutionarily conserved, with essentially unchanged structure in yeast and mammals, and here we confirmed its role in plants. But PATROL1 is a plant-specific protein that is not like anything we see in mammals or yeast. We are puzzled by what PATROL1 actually does and are excited to continue to investigate its function.”

Because CSI1 interacts with many components that are integral to cellulose synthesis, the research team plans to use it as a tool to further elucidate this important process and its evolution.

“We eventually hope to translate what we know about how plant cells build cellulose to more efficiently break it apart again for use in biofuels,” said Gu, “ultimately increasing the efficiency of biomass-based energy production.”

In addition to Gu, the research team also includes Xiaoyu Zhu, Shundai Li, and Xiaoran Xin at Penn State and Songqin Pan at the University of California, Riverside. This work was funded by the National Science Foundation (1121375). Additional support was provided by the Institutes of Energy and the Environment and the Huck Institutes of the Life Sciences at Penn State.