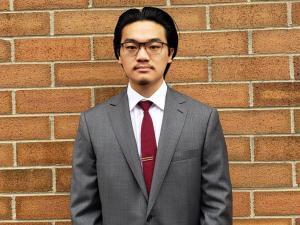 Mathematics major William Li is one of five Penn State students to be honored with the 2022 John W. Oswald Award. The award, established in 1983, annually recognizes graduating seniors who have provided outstanding leadership in at least one of several areas of activity at the University. The award consists of a medallion honoring John W. Oswald, president of the University from 1970 to 1983.

Li received the award in the  area of social services. Nominators said since 2018 he’s been working to combat food insecurity through volunteerism at The Lion’s Pantry, the official on-campus student food pantry that delivered more than 31,000 pounds of food to more than 1,600 visitors in 2020.

Li served as manager and director of the pantry. In these roles, he had many duties including interacting daily with clients, training volunteers, overseeing day-to-day operations of the pantry and its partnerships, building relationships with University offices, student organization, the community, Commonwealth campuses and alumni.

Li also supervised student managers and volunteers while creating and leading initiatives to improve operations. He said the results he’s been able to accomplish are because of numerous volunteers working as a team.

One area where Li shined, nominators said, was when the pantry was forced to close for a few months due to renovations. Li quickly implemented a partnership with Housing and Food Services where students could source food from Market East in the residence halls as well as a hot meal.

“The students were well served during this difficult summer as Will handled all the requirements for students to participate in this program,” a nominator said. “There were many questions about this new program and Will was always there to answer them and help everyone through the process.”

Nominators said Li’s endless passion for helping the food insecure also led to a much-needed renovation at the pantry. Nominators said the math major used his skills to get a better handle on the pantry’s usage, pounds of food donated and future needs, helping to steer the renovation.

“I rarely have seen a student so dedicated to this important topic here at University Park,” a nominator said. “He not only speaks intelligently about food pantries but is present and available to all who contact him. He works very hard at making the Lion’s Pantry a better program for all and spends so much of his time moving the Lion’s Pantry forward.”