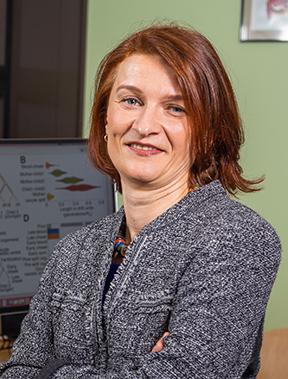 Kateryna Makova, Verne M. Willaman Chair in the Life Sciences and professor of biology at Penn State, has been awarded the Masatoshi Nei Innovation Prize in Biology. The award was established through a generous gift from Masatoshi Nei, emeritus professor of biology at Penn State and Laura Carnell Professor of Biology at Temple University, and his wife Nobuko Nei. The prize is intended to recognize a pre-eminent scientist who is on the faculty at Penn State, is an innovator in their field, and has achieved outstanding scientific research and leadership in the biological sciences.

Makova will be presented with the prize and give a public lecture at a reception held on Tuesday, October 4th at 3:00 pm in Foster Auditorium in Paterno Library. The lecture, titled “Detection and dynamics of mitochondrial mutations in mammalian populations and single cells with applications to aging and diseases,” will also be available on Zoom.

“Dr. Makova is a stellar scientist and a real leader in her field,” said Elizabeth McGraw, professor and head of biology. “Penn State has also benefited hugely from her research contributions and mentorship of junior scientists over almost two decades. She is incredibly deserving of this prize.”

Makova’s research is focused on genomics, evolution, and human genetics. Her laboratory uses computational and experimental approaches to study genetic mutations, or changes in DNA, looking at the rates and patterns of different types of mutations among different regions in vertebrate genomes. Her group uses this information to make inferences about the molecular mechanisms leading to mutations that are the cause of human genetic diseases.

Current projects in the Makova lab include evolutionary studies of the male-specific Y chromosome among the great apes, tracking mutations in the genome of mitochondria—cellular organelles thought of as the powerhouses of the cell—between parents and children, and a study of childhood obesity using genomics, microbiomics, metabolomics, and epigenetics. Her laboratory is highly interdisciplinary and collaborative.

Makova is the director for the Center of Medical Genomics, an organization that brings together Penn State researchers in medicine, genomics, molecular biology, and statistics to advance basic genomic research and translate that research into new diagnostic, therapeutic, and preventive medical strategies. Makova was appointed the Francis R. and Helen M. Pentz Professor of Science by the Eberly College of Science in 2013 and the Holder of the Verne M. Willaman Chair in the Life Sciences by Penn State in 2020.

Makova earned a doctoral degree in biology at Texas Tech University in 1999 and a master's degree in biochemistry and molecular biology at the Kiev State University in Ukraine in 1995. Prior to joining the Penn State faculty in 2003, she had been a postdoctoral fellow in the Department of Ecology and Evolution at the University of Chicago since 1999.

Masatoshi Nei was Evan Pugh Professor of Biology from 1994 to 2015 and director of the Institute for Molecular Evolutionary Genetics from 1990 to 2015 at Penn State. He constructed a mathematical theory for studying the evolutionary relationships of different species using molecular data. A statistic named for him, Nei's genetic distance, is a cornerstone of population genetics analyses. This measure makes it possible to estimate the origins of populations and the times of their divergence from common ancestors. Nei applied this technique to human populations and obtained the first evidence pointing to the African origins of modern humans. His influential paper on the "neighbor-joining" method of constructing phylogenetic trees is one of the most highly cited papers in the entire field of biology. Nei and his group have also written and distributed software packages, including MEGA for molecular evolutionary genetics analysis, which is the most widely used software for phylogenetic analysis at present.