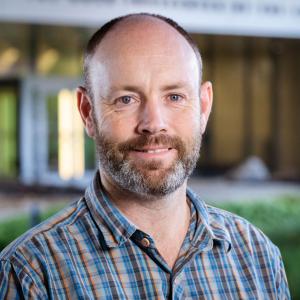 Michael Axtell, Distinguished Professor of Biology at Penn State, has been named the Louis and Hedwig Sternberg Chair in Plant Biology in the Eberly College of Science. The chair is designed to enhance Penn State’s position of leadership in plant biology.

Axtell studies a class of genes which produce small RNAs, using diverse plant species. Small RNAs, which function as sequence-specific repressors of other genes, are critical components of gene expression in nearly all eukaryotic organisms and are especially important for regulating the developmental programs of both animals and plants. Axtell’s research group uses computational methods to discover, annotate, and quantify small RNA genes in plants. His group also uses genetics, molecular biology, and genomics to study the function of ancient small RNAs in diverse plant species, identify the genes that are the targets of small RNA repression, and understand the sequence requirements of the interaction of small RNAs and their targets.

Axtell joined the faculty at Penn State in August 2006 as an assistant professor and was promoted to associate professor in 2011, to professor in 2016, and named distinguished professor in 2022. Prior to this, he was a postdoctoral fellow in the Whitehead Institute for Biomedical Research at the Massachusetts Institute of Technology. Axtell earned a bachelor’s degree in biology at Ithaca College in 1998. He earned a doctoral degree in plant biology at the University of California at Berkeley in 2003.

The Louis and Hedwig Sternberg Chair in Plant Biology was established by alumnus Harold L. Kohn and his wife Carol K. Kohn in 2020 to honor Harold’s grandparents, Lewis and Hedwig Sternberg. The Kohn Charitable Trust endowed this position in recognition of Louis Sternberg’s connection to the land, Louis’s and Hedwig’s respect for education and knowledge, and the importance of plant biology for our future.