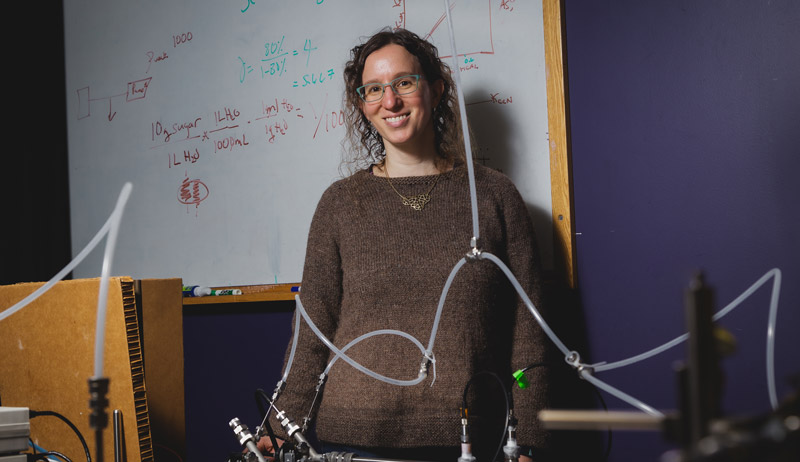 In Kurt Vonnegut’s 1963 classic science-fiction novel Cat’s Cradle, a fictional Nobel laureate has created a substance called ice-nine—a form of water that is solid at room temperature. If ice-nine comes in contact with liquid water it acts as a seed crystal, “freezing” the liquid water. This plays out with predictably dire consequences, freezing entire oceans and causing cataclysmic storms. Vonnegut’s imagination and creativity were impressive, but he didn’t develop this idea in a vacuum. In the late 1940s, his brother Bernard, an atmospheric scientist, showed that silver iodide, which has a crystal structure similar to that of water, could be used as a potent seeding agent to make rain or snow from clouds.

Jump to the present and Miriam Freedman, a Penn State chemist, is using similar ideas to better understand cloud formation itself. Her lab studies how different aerosolized particles in the atmosphere interact with gas-phase water to form cloud droplets. Understanding of these processes could eventually feed into models to help predict the weather.

“Aerosolized particles—sea spray, mineral dust, or organic compounds—in the atmosphere are the seeds of cloud formation,” said Freedman. “You never have water coming out of the gas phase and forming a cloud droplet on its own. You always have nucleation around some particle, but there is a lot that is not understood about the process.”

Clouds can be made of liquid water droplets or ice droplets, and the particles that act as seeds for these droplets can be solid or aqueous. Freedman’s group studies how the composition, surface properties, crystal structure, and size of these particles impact cloud formation and the chemistry that occurs during this process.

“Organic compounds tend to clump around aqueous salts that are always present in the atmosphere,” said Freedman. “This can trigger the particle to separate into two liquid phases—one rich in organic compounds and the other rich in inorganic compounds. We were able to show that this phase separation is inhibited when the particles are smaller that 50 nanometers in diameter. Because phase separation is important for water uptake and the chemical reactions that occur on the particles, knowing this helps us understand how liquid cloud droplets form and grow.”

To study the formation of ice cloud droplets, Freedman uses synthesized materials that are proxies for the particles found in the atmosphere. To synthesize and characterize these particles, Freedman collaborates with the scientists in Penn State’s Materials Characterization Lab (MCL).

“Water droplets don’t freeze until negative 40 degrees Celsius because the ice crystals won’t form unless there is an insoluble particle to act as a seed,” said Freedman. “When we make ice normally, there are always imperfections on the surface of the container that can seed the crystal formation. So we are interested in how the surfaces of these particles interact with water to form ice. Particles like silver iodide that have crystals structures so similar to ice will behave differently than particles that are more amorphous. We couldn’t examine these processes in the lab with out the help and expertise of the MCL.”

Our understanding of water and its various phases has come a long way since Vonnegut wrote about ice-nine, and it turns out that this form of water actually exists, at least under extreme pressure. But luckily, it won’t destroy the world. Instead we face potential climate disaster from other sources, and Freedman’s research can help us understand the basic science underlying our climate system.

“I came from a very fundamental chemistry background and am motivated, at least partially, by basic science, but this work has clear applications,” said Freedman. “We are working toward a better understanding of how our climate system works, and the idea is, if we can do that, then we can better predict what will happen in the future and better model the Earth system.”