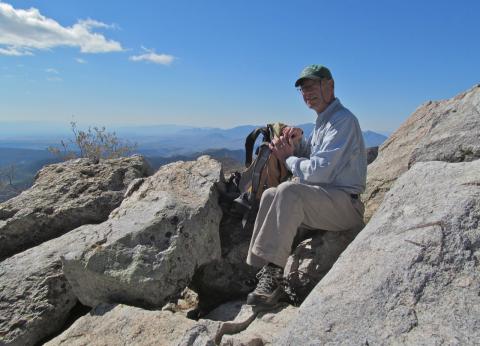 Seasoned hiker and Penn State alumnus Stephen Brumbach has spent almost 1,600 days hiking wilderness areas across the United States. His passion for the natural world is matched only, perhaps, by his desire for others to experience its beauty. In addition to the book he is writing for other hikers, Brumbach is committed to supporting the next generation of students, who just might hold the future of the planet in their hands. Education in STEM fields, he says, is critical to their success.

“Science education can prepare people to solve real problems,” said Brumbach. “In times like ours when facts, logic, and objectivity itself are under attack, disciplined minds are a priceless resource.”

To support science education at Penn State, Brumbach has begun to make a series of gifts to create distinguished graduate fellowships in each of the seven departments within the Eberly College of Science. Supporting graduate students, he says, maximizes his impact on science education, as many go on to teach science and thus reach another generation of students.

The Distinguished Graduate Fellowship Program initiative was designed to double the number of University Graduate Fellowships available at Penn State through philanthropic support. The fellowships provide a form of tuition aid, a stipend, and health insurance to talented graduate students.

“We are so grateful to Steve Brumbach for his ongoing and generous support of graduate students at Penn State,” said Douglas Cavener, Verne M. Willaman Dean of the Eberly College of Science. “Graduate students are integral to every facet Alumni News of the college’s academic mission, and providing competitive support for top graduate students remains a critical priority.”

Brumbach, who graduated with a Ph.D. in chemistry from Penn State in 1971, recalls the importance of a fellowship in his own graduate education. He had been accepted to both Penn State and Cornell for graduate school and was weighing his options when the phone rang for him in his undergraduate dorm—an almost unheard- of experience, even in the days before cell phones. The caller was Thomas Wartik, then professor and head of the Department of Chemistry and later dean of the college.

“He offered me a fellowship, and it took about five seconds for me to say yes,” said Brumbach, who reflects positively on his experience at Penn State. “I remain indebted to my thesis advisor, Gerd Rosenblatt, who was a perfect fit for me. Another professor who had a big impact on me was William Steele, from whom I took multiple courses. Both of these men I consider the epitome of what a scientist should be.”

Brumbach worked for more than 20 years in the nuclear industry, including at Argonne National Laboratory in Idaho. He later moved to Wyoming, where he taught chemistry at Western Wyoming Community College as an assistant professor. In 2004, he retired to become a full-time hiker.

In his retirement, Brumbach hopes to continue hiking in the 765 wilderness areas designated since the Wilderness Act of 1964. So far he has visited just over 600.

Brumbach’s passion for the outdoors started early in his life while growing up in rural Pennsylvania. His father owned a general store in the tiny village of Shanesville. The closest city was Reading, 15 miles away. In his youth, he helped his father as much as he could, sometimes serving as a checker, bagger, stock boy, gas pump jockey, and general gofer, all in the same afternoon.

“Rural areas were still pretty rural then,” he said. “Access to the outdoors was easy; walk out the back door.” He explored nearby orchards, forests, and farm fields, and when he was too young to explore further on his own, he would beg any adult to accompany him. When he was old enough to explore distant places alone, he always looked for the quietest and most remote spots.

Today, Brumbach continues to seek out quiet and natural places, often hiking alone. Perhaps because he has lived a solitary life, he has actively looked for ways to give back to the communities that have meant the most to him. His soon-to-be- published book chronicles and ranks the wilderness areas he has visited, sharing what he has learned over 40 years of hiking, in the hope of inspiring others to visit these scenic places. His gifts to create fellowships at Penn State have already benefited multiple graduate students and will continue to reach students whose research, teaching, and impact just might help keep America’s wildernesses green and thriving for years to come.