A new understanding of how an important methane-producing microorganism creates methane and carbon dioxide could eventually allow researchers to manipulate how much of these important greenhouse gases escape into the atmosphere. A new study by Penn State researchers proposes an updated biochemical pathway that explains how the microorganism uses iron to more efficiently capture energy when producing methane. The study appears online in the journal Science Advances.

“The microorganism Methanosarcina acetivorans is a methanogen that plays an important part in the carbon cycle, by which dead plant material is recycled back into carbon dioxide that then generates new plant material by photosynthesis,” said James Ferry, Stanley Person Professor of Biochemistry and Molecular Biology at Penn State, who led the research team. “Methanogens produce about 1 billion metric tons of methane annually, which plays a critical role in climate change. Understanding the process by which this microorganism produces methane is important for predicting future climate change and for potentially manipulating how much of this greenhouse gas the organism releases.” 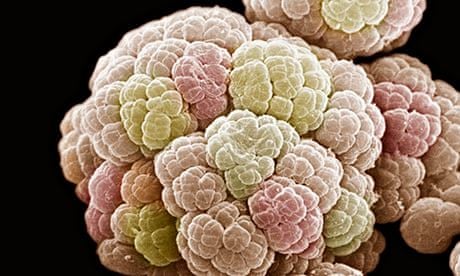 Methanosarcina acetivorans, which is found in environments like the ocean floor and rice paddies where it helps to decompose dead plant material, converts acetic acid into methane and carbon dioxide. Prior to this study, however, researchers were not certain how the microorganism had enough energy to survive in the oxygen-free—anaerobic—environments where it lives. The researchers determined that an oxidized form of iron called “iron three,” essentially rust, allows the microorganism to work more efficiently, using more acetic acid, creating more methane, and creating more ATP—a chemical that provides energy for biological reactions essential for growth.

“Most organisms like humans use a process called respiration to create ATP, but this requires oxygen,” said Ferry. “When no oxygen is present, many organisms instead use a less efficient process called fermentation to create ATP, like the processes used by yeast in the production of wine and beer. But the presence of iron allows M. acetivorans to use respiration even in the absence of oxygen.”

The findings allowed the researchers to update the biological pathway by which M. acetivorans converts acetic acid to methane, which now includes respiration. Pathways like this one involve many intermediate steps, during which energy is often lost in the form of heat. The researchers also determined that in the presence of iron, energy loss in this microorganism is reduced due to a recently discovered process called electron bifurcation.

“Electron bifurcation takes one of those steps that has the potential for tremendous heat loss and harvests that energy in the form of ATP rather than heat,” said Ferry. “This makes the process more efficient.”

This updated pathway could allow researchers to predict the amount of methane that the microorganism will release into the atmosphere.

“Rice paddies—a major source of the methane in the atmosphere—contain decaying rice plants submerged in water that are ultimately processed by M. acetivorans. If we measure the amount of iron three present in the paddies, we can predict how much methane will be released by the microorganisms, which can improve our climate change models.”

In the absence of iron, the microorganism produces roughly equal amounts of methane and carbon dioxide from acetic acid. But with increasing amounts of iron, it produces more carbon dioxide relative to methane, so providing the organism with additional iron could alter the relative amounts of these greenhouse gasses that are produced.

“Methane is 30 times more potent as a greenhouse gas than carbon dioxide, which makes it more problematic in terms of our warming planet,” said Ferry. “Now that we better understand this biochemical pathway, we see that we can use iron to alter the ratios of the gasses being produced. In the future, we might even be able to go further and inhibit the production of methane by this microorganism.

“In addition to the practical applications, this is a major addition to understanding the biology of the largely unseen but hugely important anaerobic world.”

In addition to Ferry, the research team includes Divya Prakash and Shikha Chauhan at Penn State. The research was supported by US Department of Energy and the Penn State Eberly College of Science.