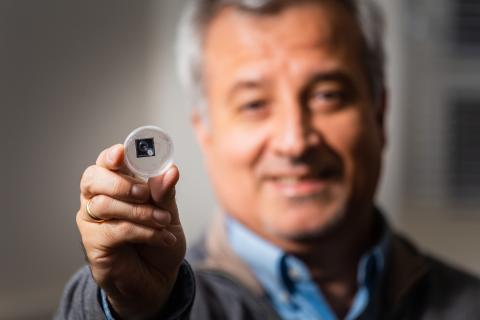 Could you imagine something seemingly as basic as a carbon molecule comprising the core of a revolutionary new technology with the potential to transform global agriculture, medicine, and public health?

It’s becoming reality in the lab of Eberly researcher Mauricio Terrones, who works with carbon nanotubes—hollow, cylindrical structures averaging on the order of 50,000 times thinner than a single human hair.

“There's a sensation, when you discover something new that you are the first to see or make, a new phenomenon,” Terrones said as we sat talking in his office—the very place where, in 1955, physicist Erwin Mueller became the first person to view an atom. “You get this feeling like goosebumps all over you, like 'Wow!', an instant of joy—it’s the thing that you’re looking for.”

Several years ago, Terrones and colleagues Siyang Zheng and Yin-Ting “Tim” Yeh developed a means of growing carbon nanotubes in precisely aligned-and-spaced forest-like arrays, which they fitted inside a tiny (one square centimeter) microfluidic device for capturing viruses in an elegant and unprecedented way: by their size.

The first step in detecting and identifying viral pathogens—crucial to early intervention in the case of an outbreak—capturing them is especially challenging with newly emerging and rapidly mutating virus strains, which are often unpredictable, explosive, and deadly. The most used method, immunological capture, binds viral particles to antibody "labels" that can then be isolated along with the virus for analysis, but this technique requires prior knowledge of the virus to match it with an antibody and is therefore unsuitable for emerging or recently mutated strains.

Another challenge, post-capture, the viruses need to be enriched to detectable levels and the samples concentrated for accurate identification. Ultracentrifugation can enrich and concentrate virus samples but requires bulky lab equipment and is time and labor intensive. Micro- and ultrafiltration membranes can isolate viral particles, but some don't remove small contaminants like nucleic acids and proteins or concentrate the sample, while others yield poor virus viability and are difficult to retrieve the viral particles from for further analysis.

But with these Penn State scientists' device, as a sample is passed through it, the viruses become physically entangled in the forest of carbon nanotubes, whose spacing can be fine-tuned to match different viruses' sizes. Larger particulate, such as cells or tissue debris, is pre-filtered and smaller particles flow through the device, effectively isolating the viruses from host and environmental contaminants while also enriching and concentrating the sample, thus improving detection limits by at least 100 times compared to other techniques and enabling direct identification of the viruses via next-generation sequencing. And because the device traps viruses without relying on antibody labels, it works even with emerging viruses, which have caused some of the most devastating pandemics in human history.

While the researchers were testing their device, they made a surprising discovery: The viruses trapped inside the carbon nanotubes were highly viable and remained so at near-ambient temperatures for much longer than with other methods or materials, opening the door to in-field analysis and extending the timetable for transferring samples to laboratories for further diagnostics, in-depth studies, even vaccine development.

By October 2016, the team's results were published in Science Advances and Terrones, Zheng, Yeh, and several of their colleagues had applied for a patent on their invention, which they named the carbon nanotube size-tunable enrichment microdevice, or CNT-STEM for short. 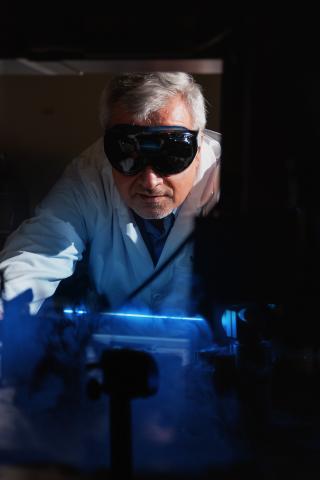 As we talked in his office, Terrones flipped through a presentation he’d given recently of new and unpublished results, retracing the latest development in the team's research and detailing their progress toward another first-of-its-kind discovery. When coupled with a smartphone and a portable spectrometer, he explained, the CNT-STEM could be used in the field to not only capture viruses but also identify them optically and in mere minutes; whereas conventional, molecular biology–based identification methods can take hours at minimum, or even days, of complex and tedious procedures in a laboratory. With the spectrometer, a sample is hit by a quick laser pulse that causes it to vibrate and scatter the light, which is collected by a sensor and analyzed using an app on the smartphone. "The vibrational modes of the viruses are like fingerprints," he said—each one uniquely identifiable.

As the global populace becomes increasingly mobile and interconnected, with the next lethal outbreak just a plane ride away, Terrones envisions the CNT-STEM being used like a breathalyzer to screen travelers in queue as they board flights departing suspected hotspots—places like California at the outset of the 2009 H1N1 influenza pandemic or the West African nation of Guinea in the early days of the 2014–2016 Ebola outbreak. "If this technology could be used to identify viruses early on," he said, "to diminish pandemics, to develop vaccines—if we could save lives—that would be a great impact."

Beyond the realm of public health, Terrones has found applications for the CNT-STEM in agriculture. With collaborators Cristina Rosa and Huaguang Lu in Penn State's College of Agricultural Sciences, he is testing the device for early detection of viruses in both crops and livestock—specifically, tomatoes and poultry—as well as for poultry vaccine development.

"Avian disease," Lu said, "is a big problem affecting poultry industries regionally and globally." He explained that it's not uncommon for producers to incur losses of 10 to 20 percent from typical infections, while severe outbreaks can result in up to 50 percent losses, and mortality rates for the most lethal viruses—such as highly pathogenic avian influenza—can be as high as 80 percent or even a total loss of the flock. To prevent such scenarios, early detection and vaccination are key.

Likewise with crops, viruses' impact can be catastrophic. Tomato spotted wilt virus, for instance, costs growers worldwide an estimated $1 billion annually. With many viral infections being spread through contaminated transplants, early detection and quarantine are critical steps in mitigating potential crises on a regional or even global scale. "There are lots of implications in agriculture," Rosa said, "not only for tomato production but also for protection of the industry." And Terrones's new optical identification technology, she said, "is the dream of every plant pathologist."

Several times in the course of our conversation, Terrones stressed the value of multidisciplinary collaborations like those with Rosa and Lu. It’s a particularly personal passion that dates back to his earliest days at Penn State, when he was part of a task force working to bring together the University’s biologists and materials scientists. To solve today’s most challenging problems, he explained, requires going outside your comfort zone and embracing an approach of the sort exemplified by Penn State’s research community.

"One of the major strengths of this University is that it's highly collaborative,” he said. “One discipline itself is not enough for tackling very complex problems, and the fact that you can communicate easily with others in other disciplines, to build multidisciplinary teams in which each member complements everyone else—I think that’s where things really move forward.”

In addition to partners in the agricultural and life sciences, like Lu and Rosa, Terrones specifically selects collaborators and lab members to embody a unique and deliberate convergence of skills in physics, chemistry, materials science, and engineering. Case in point, he noted that his colleague and lab member Tim Yeh, when he devised the method of growing carbon nanotubes for the CNT-STEM, was a graduate student in Siyang Zheng’s lab, working toward his doctorate in bioengineering after completing an undergraduate degree in materials science.

In total, the scientific acumen that produced the CNT-STEM spans three colleges, seven departments, and two interdisciplinary research institutes, buttressed by multiple entrepreneurial initiatives that have provided seed funding, helped to secure patents, and even facilitated the launch of a startup company—Virolock Technologies LLC—that now is the linchpin of Terrones’s and his colleagues’ efforts to take their device to market. 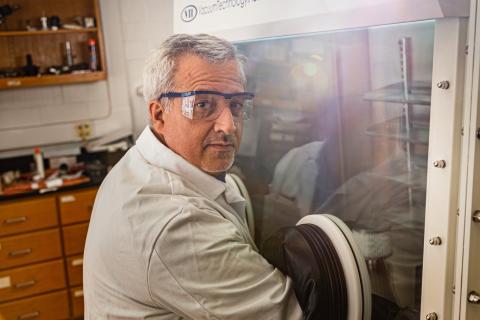 For all the success of the CNT-STEM, Terrones hasn’t limited his work to that single, albeit promising, project. One of the world's foremost experts on carbon nanotubes, he has used them to develop a number of other materials and related technologies for water desalination, hydrogen-fuel catalysis, oil-spill cleanup, even next-generation batteries for high-tech devices. He also works on noncarbon-based nanomaterials, including one that when ingested by cancer cells produces a fluorescence that can be easily tracked as the cells multiply and spread.

But with the CNT-STEM, Terrones is focused on further refining the carbon-nanotube platform and optical virus-identification technology, which he and Yeh have continued working closely together to develop. One of the biggest challenges, he explained, is the relative weakness of the spectroscopic signal, the light scattered by the sample. "We're going back to the physics and trying to improve the signal, to enhance the signal-to-noise ratio, with a new platform," he said.

Toward that end, Terrones has launched a new collaboration with spectroscopy expert Shengxi Huang in Penn State's College of Engineering. Simultaneously, he is working with virologists at the University to compile a database of viral spectra, those fingerprintlike signals of scattered light. And in a third new concurrent collaboration, initiated by Yeh with computer scientist Sharon Huang in the College of Information Sciences and Technology, Terrones is applying machine learning to that database to improve the accuracy of identifying viruses by their spectral fingerprints. "The spectra look very similar, but there are tiny differences,” he said. “If you build a database and an algorithm that will analyze all your spectra, it will refine those signals and you will start getting more confidence in your results.” With identifications already at roughly 90 percent confidence, still they are pushing to raise the upper limit of accuracy.

Taking the technology even further, in another collaboration sparked by Yeh, Terrones is working with Yingwei Mao in the biology department to apply the CNT-STEM and optical identification to nonviral biological particles of similar size—such as exosomes and other potential biomarkers for cancer, neurodegenerative diseases, and other medical disorders—with the hope of improving point-of-care diagnostics in clinical medicine. Considered en masse, the prospective applications of Terrones’s research are astounding in their breadth, inspiring in their potential for impact—perhaps all the more so considering their nearly universal origin in infinitesimal molecules of carbon.

Terrones himself is, as I came to know, driven to discover and determined to make a difference. As we wrapped up our interview, Old Main's tower clock chiming across the quad, I asked what inspiration drove him onward. He replied, “I like finding new things, new phenomena, and making new things that could transform the world. That's what I'm looking for. That's my motivation. It's what keeps me working, and there are many problems to be solved."