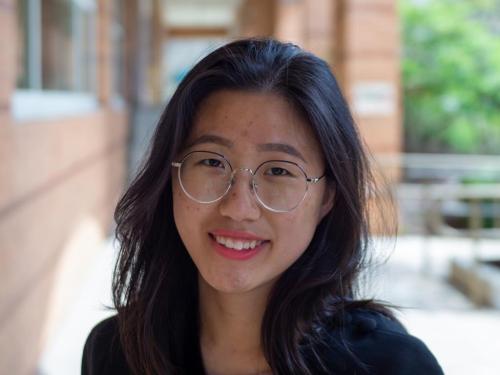 Penn State senior Ellie Kim has received a 2022 Astronaut Scholarship, which provides $15,000 toward education for careers in engineering, math or natural or applied sciences research.

The national award is presented by the Astronaut Scholarship Foundation, established in 1984 by the six surviving members of the original Mercury 7 astronauts, along with Betty Grissom, widow of Virgil “Gus” Grissom; William Douglas, Project Mercury flight surgeon; and Henri Landwirth, businessperson and friend of the Mercury 7.

Kim, of State College, Pennsylvania, is a Schreyer Scholar majoring in general music (piano) and biochemistry and molecular biology. It’s been a big year for Kim, who earlier this year also earned a Goldwater Scholarship.

“I was very excited when I heard the news about the Astronaut Scholarship,” she said. “I was honestly shocked because it is one of the most prestigious awards, so I became very appreciative of the support I had from my research mentors and the University.”

This past summer, Kim participated in a summer research internship at Children’s Hospital in Philadelphia Research Institute in the field of immunology.

“Though a lot of the material I am working with is new to me, it's exciting to explore a new area of research I haven't touched on before.”

Her previous undergraduate research under Moriah Szpara, associate professor of biology and of biochemistry and molecular biology, focuses on how the genetic diversity of herpes viruses brings about different characteristics in their infectivity and severity. Kim also pursued research opportunities outside Penn State at the Cincinnati Children’s Hospital, where she worked with Leah Kottyan, associate professor in the University of Cincinnati Department of Pediatrics, to establish a link between the Epstein-Barr virus and multiple sclerosis. She also recently worked as an intern in Germany through the DAAD RISE program to conduct diabetes research.

More about the Astronaut Scholarship and how to apply

The Astronaut Scholarship Foundation was established in 1984 by the six surviving members of the original Mercury 7 astronauts, along with Betty Grissom, widow of Virgil “Gus” Grissom; William Douglas, Project Mercury flight surgeon; and Henri Landwirth, businessperson and friend of the Mercury 7. The Mercury 7 are America’s first astronauts, picked from the ranks of U.S. military test pilots in the late 1950s. The foundation continued to grow its support over the years from astronauts from the Gemini, Apollo, Skylab and Space Shuttle programs, according to the Astronaut Scholarship Foundation website.

The University can nominate up to two applicants for the award each year, so students must first pass through an internal Penn State selection process facilitated by Undergraduate Research and Fellowships Mentoring. Students must be U.S. citizens, full-time second- or third-year Penn State students with one to two years of study remaining and be majoring in an approved STEM field with the intention of pursuing a career in research.

Penn State nominates its applicants based on proof of creativity and innovation, initiative and exceptional performance in their respective fields. The University deadline to apply for the next round of Astronaut Scholarships is slated for late January 2023.

Students interested in applying to the scholarship can contact Undergraduate Research and Fellowships Mentoring at urfm@psu.edu to learn more about the scholarship program and verify that they meet the eligibility criteria.

Undergraduate Research and Fellowships Mentoring is part of the Penn State Office of Undergraduate Education.