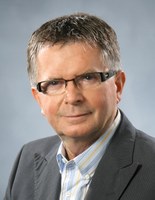 A team of astronomers from Penn State and Nicolaus Copernicus University in Poland has discovered a new planet that is closely orbiting a red-giant star, HD 102272, which is much more evolved than our own Sun. The planet has a mass that is nearly six times that of Jupiter, the largest planet in our solar system. The team includes Alexander Wolszczan, the discoverer of the first planets ever found outside our solar system, who is an Evan Pugh Professor of Astronomy and Astrophysics and the director of the Center for Exoplanets and Habitable Worlds at Penn State; and Andrzej Niedzielski, who leads his collaborators in Poland. The team suspects that a second planet may be orbiting HD 102272, as well. The findings, which will be published in a future issue of The Astrophysical Journal, shed light on the ways in which aging stars can influence nearby planets.

Scientists already know that stars expand as they age and that they eventually may gobble up adjacent planets. In fact, scientists expect our own planet to be swallowed up by the Sun in about five billion years. But what scientists don't yet understand fully is how aging stars influence nearby planets before they are destroyed. The team's newly discovered planet is interesting because it is located closer to a red-giant star than any other known planet. From the distance of 0.6 astronomical units, which is just inside the orbit of Venus around the Sun, the steadily expanding giant appears in the planets' alien skies as a huge, reddish disk that is more than 16 times larger than the face of Earth's full Moon appears to us. 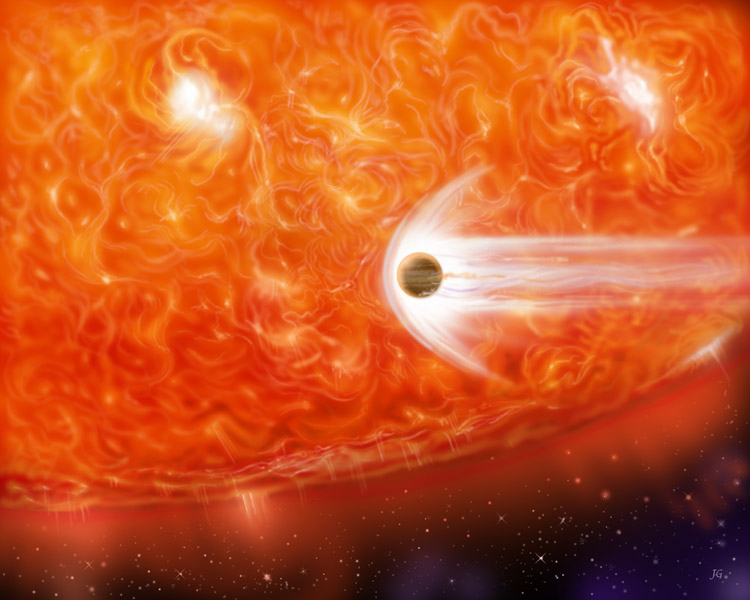 An artist's impression of a red supergiant engulfing a Jupiter-like planet as it expands. Credit: NASA

"When red-giant stars expand, they tend to eat up the nearby planets," said Wolszczan. "Although the planet we discovered conceivably could be closer to the star without being harmed by it, there appears to be a zone of avoidance around such stars. Our discovery pushes it back to about 0.6 astronomical units, which is the size of the new planet's orbit. It is important to find out why planets don't want to get any closer to stars, so one of our next steps is to try to figure out why this zone of avoidance exists and whether it occurs around all red-giant stars."

The team used the Hobby-Eberly Telescope of McDonald Observatory in south-western Texas to make its discovery. Through the telescope, which is equipped with a precise spectrograph, the scientists observed a pattern of alternating shifts of spectral lines in the light coming from the star, which is located 1,200 light-years from the Earth in the constellation Leo. These tiny, alternating shifts represent the fingerprint of a star that is moving alternately toward and away from Earth as it wobbles in space responding to the gravitational pull of an orbiting planet. Because of the Doppler effect, the light from the star becomes bluer as it moves toward the Earth and then redder as it recedes from it, which is reflected by the measured shifts of the spectral lines. The specific pattern of these shifts, which the research team observed, allowed the scientists to determine that one planet -- and possibly two planets -- orbit the star. If the second planet exists, the system would become the first multiplanet system discovered around a red-giant star. 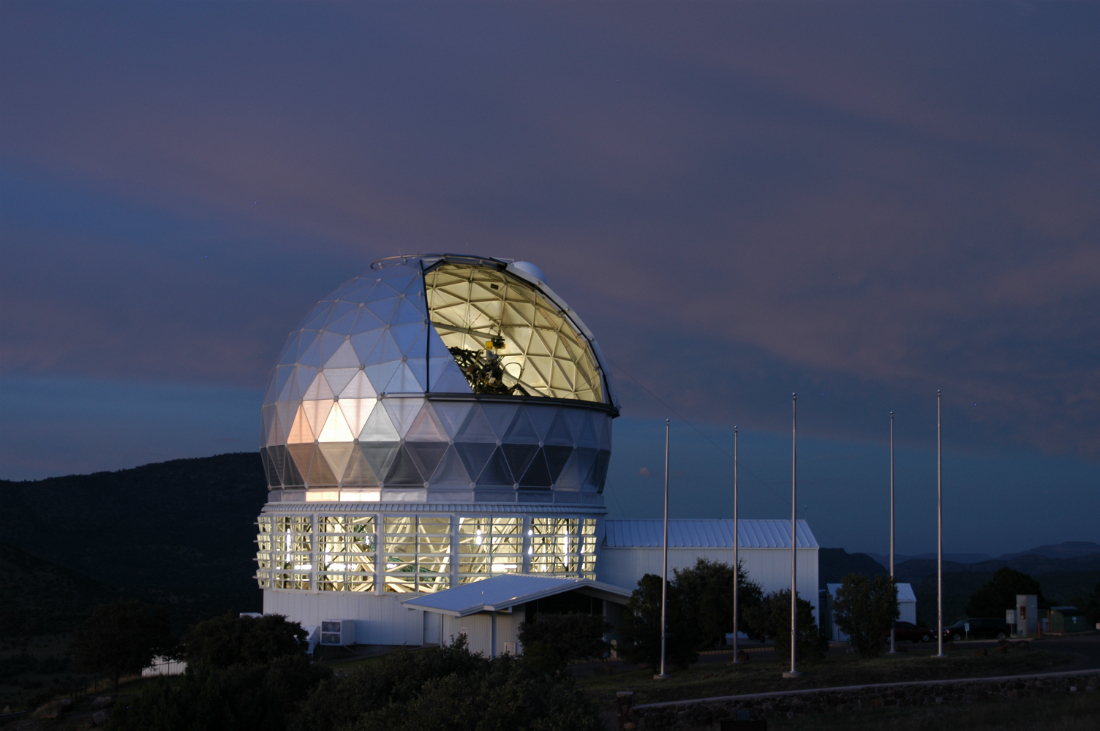 The mirror of the 9.2-meter Hobby-Eberly Telescope is visible through the open louvers in this twilight view. In daylight, the flagpoles on the right show the flags of the five HET partner institutions. Credit: Marty Harris/McDonald Obs./UT-Austin

Wolszczan said that he is particularly interested in applying to our own solar system the knowledge he gains about the effects of aging stars on planets orbiting other stars. "Our own Sun one day will become a red giant and it is interesting to think about what will happen to the outer planets of our solar system as the Sun expands," he said. "For example, Europa, one of Jupiter's moons, is covered by ice, but if it were to exist closer to the Sun, it might become a warm ocean world that could possibly support life."

In 1992, Wolszczan became the first person to discover planets outside our solar system when he used the 1,000-foot Arecibo radiotelescope to detect three planets orbiting a rapidly spinning neutron star. The discovery opened the door to the current intense era of planet hunting by suggesting that planet formation could be quite common throughout the universe and that planets can form around different types of stellar objects. The Penn State Center for Exoplanets and Habitable Worlds, which Wolszczan directs, fosters research in the field of extrasolar-planet studies in which the primary goals are to find planets where living organisms exist, or might exist, and to determine their rate of occurrence in the universe. The researchers received support from the Polish Ministry of Science and Higher Education, the NASA Astrobiology Program, the Foundation for Polish Science, and the Polish Academy of Sciences.

MORE ABOUT THE HOBBY-EBERLY TELESCOPE

The Hobby-Eberly telescope was built by a partnership of five universities: the University of Texas at Austin; Penn State (The Pennsylvania State University); Stanford University; and two German universities, Georg-August University in Goettingen and Ludwig-Maximilians University in Munich. The namesakes of the Hobby-Eberly Telescope are William P. Hobby, the former Lieutenant Governor of Texas, and Robert E. Eberly of Pennsylvania, an industrialist, philanthropist, and generous benefactor of Penn State. The Hobby-Eberly Telescope is located at the McDonald Observatory in far West Texas, which has the darkest skies of any major observatory in the continental United States.