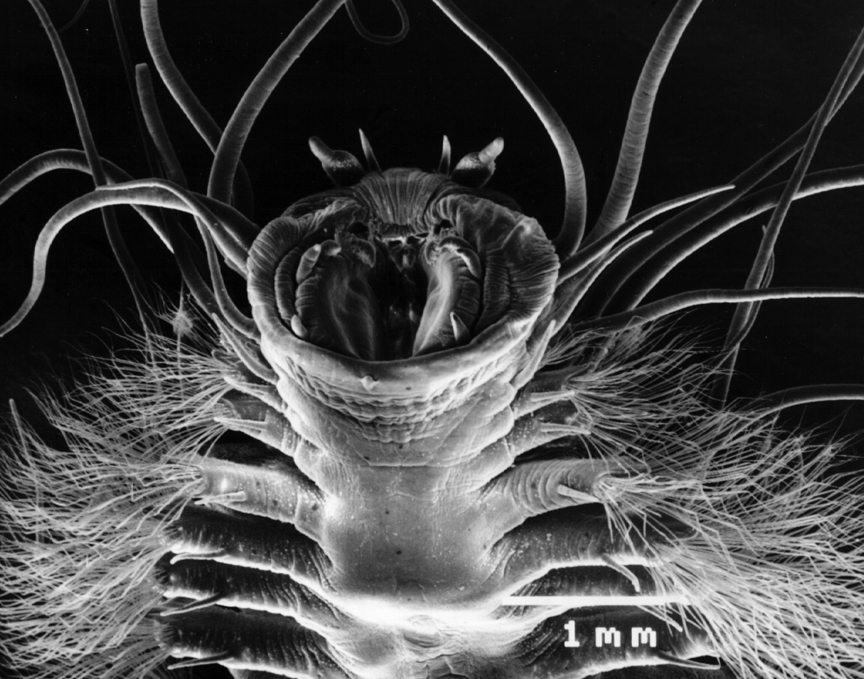 A team of university scientists using a mini research submarine on a NOAA-funded research cruise has discovered, photographed, and sampled what appears to be a new species of centipede-like worms living on and within mounds of methane ice on the floor of the Gulf of Mexico, about 150 miles south of New Orleans.

Although scientists had hypothesized that bacteria might colonize methane ice mounds, called gas hydrates, this is the first time animals have been found living in the mounds.

The discovery of dense colonies of these one-to-two-inch-long, flat, pinkish worms burrowing into a mushroom-shaped mound of methane seeping up from the sea floor raises speculation that the worms may be a new species with a pervasive and as yet unknown influence on these energy-rich gas deposits.

The worms were observed using their two rows of oar-like appendages to move about the honeycombed, yellow and white surface of the icy mound. The researchers speculate that the worms may be grazing off chemosynthetic bacteria that grow on the methane or are otherwise living symbiotically with them.

"The old view that the deep sea bottom is a monotonous habitat needs to be discarded. These worms are the major players in a new and unique marine ecosystem," said expedition Chief Scientist Charles Fisher, an associate professor of biology at Penn State, who discovered the methane ice worms in waters 1,800 feet deep in the submersible Johnson Sea Link with sub pilot Phil Santos of the Harbor Branch Oceanographic Institution. 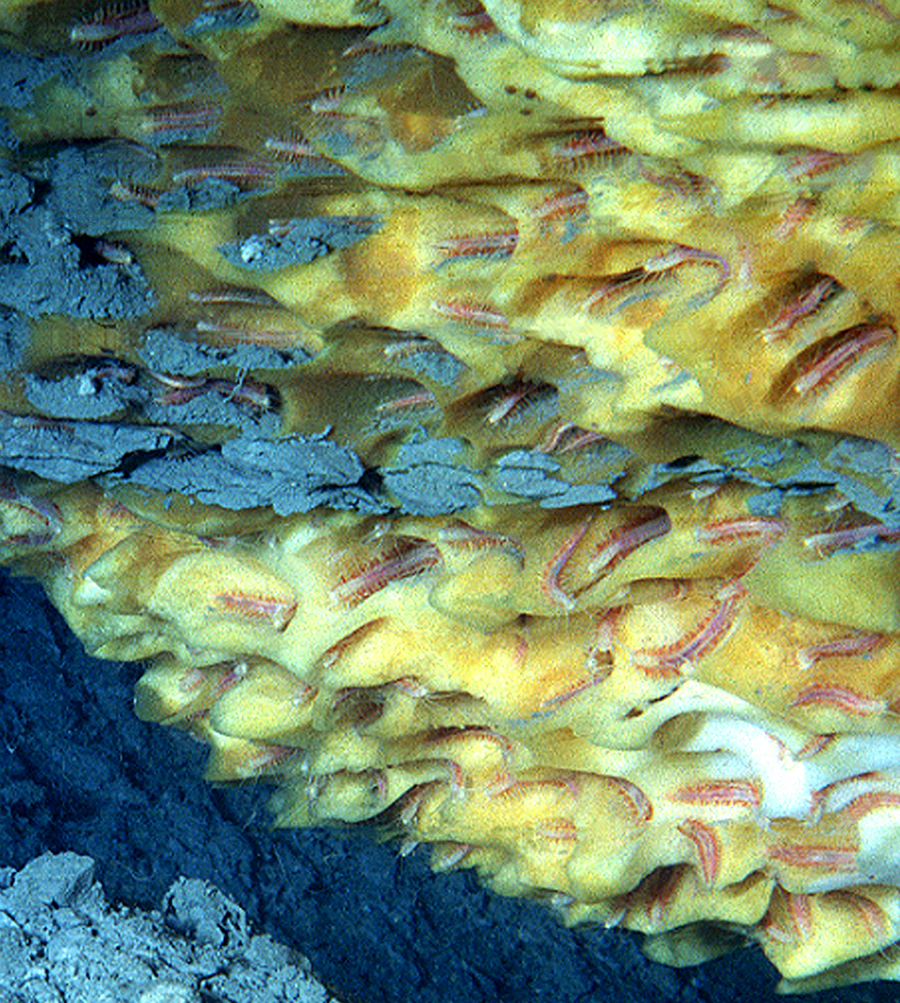 This close-up photo shows a dense colony of one-to-two inch-long polychaete worms living on and in the surface of the methane hydrate.  These worms were discovered on July 15th 1997, by Penn State Associate Professor of Biology Charles Fisher and his research team, which is just beginning to study them.  they speculate that the worms may colonize the hydrates even when they are buried and that the worm's nutrition is tightly tied to the hydrate itself.
(Photo credit: Charles Fisher, Penn State)

The scientists have also managed to keep a number of the exotic worms alive in shoreside laboratories for further study.

"These are not just another common worm in the mud. We now know that these higher-order organisms can live right on methane hydrates. If these animals turn out to be ubiquitous on shallow seafloor gas deposits, possibly worldwide, they could have a significant impact on how these deposits are formed and dissolve in seawater and on how we go about mining or otherwise harvesting this natural gas as a source of energy," Fisher said.

"It's very cool that while we're busy speculating about life on other planets we continue to discover new forms of life in the most unlikely habitats on Earth," commented Erin McMullin, a Penn State graduate student and a member of the research expedition that discovered the methane-ice worms. Methane ice, a gas hydrate, forms naturally at the high pressure and low temperature of the deep sea, but is usually buried deep in marine sediment. The Gulf of Mexico is one of the few places where hydrate can be found exposed on the ocean bottom. Occasionally this seeping, solid methane bursts through in mounds, often six to eight feet across.

The first leg of the ten-day expedition, which ended July 19, was carried out aboard the Harbor Branch Research Vessel Edwin Link and sponsored by the NOAA National Undersea Research Center at the University of North Carolina at Wilmington and the Minerals Management Service of the U.S. Department of the Interior. In addition to Chief Scientist Charles Fisher, principal investigators included Ian MacDonald of Texas A&M University, Robert Carney of Louisiana State University, Steve Macko of the University of Virginia, and Alissa Arp and David Julian of San Francisco State University.

A second leg of the expedition, sponsored by MMS and NOAA, continues through August 1.