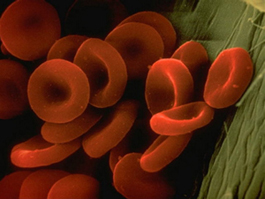 The scientists at Penn State used red blood cells from a mouse to study the evolution of gene regulation. The research is expected to help other researchers to develop drugs to treat people who suffer from sickle-cell anemia and other blood disorders. Wikimedia Commons (Public Domain)

Scientists at Penn State have shed light on some of the processes that regulate genes -- such as the processes that ensure that proteins are produced at the correct time, place, and amount in an organism -- and they also have shed light on the evolution of the DNA regions that regulate genes. The team focused on regulatory regions that, when bound to the protein GATA1, are thought to turn on genes that play an important role in the development of red blood cells. "Our findings could help others to develop drugs to treat people who suffer from sickle-cell anemia and other blood disorders," said Ross Hardison, the T. Ming Chu Professor of Biochemistry and Molecular Biology, and the team's leader. The results will be published on 1 December 2008 in the journal Genome Research.

Scientists once believed that nearly all DNA regulatory regions would be maintained, or conserved, in the DNA of related species over the course of their evolution because the regions contribute to essential biological functions. Scientists also believed that when bound to specific proteins, such as GATA1, DNA regulatory regions influence the expression of genes. But now researchers at Penn State have provided new evidence that not all of the DNA segments that are bound to GATA1 have been conserved in the genomes of related animals. They also found that the GATA1-bound DNA segments that are conserved among mammals do act to control the level of expression of certain genes.

To make their discovery the team used a technique called chromatin immunoprecipitation (ChIP) to identify all the DNA segments that bind to the GATA1 protein along most of a mouse chromosome. The technique works by using an antibody that specifically binds to GATA1 and pulls it from the genome along with the DNA segments to which the protein is bound. In this way, the researchers were able to isolate 63 DNA segments that are associated with GATA1 in the mouse chromosome. They then compared the DNA sequences in these segments to those in other species. The team found that only 45 percent of the GATA1-bound DNA sequences from the mouse were present in an identical form in other mammals. "We were surprised that so few of these GATA1-occupied regions, which could be involved in gene regulation in the mouse, are not present in the identical form in most other vertebrates," said Hardison.

DNA sequences that are maintained across species over the course of their evolution are said to be conserved. A portion of these conserved sequences shows a particularly high level of similarity across species, indicating that a process is at work, called purifying selection, in which changes in the DNA are rejected. Previously, scientists assumed that purifying selection maintains most regulatory regions in the genomes of animals because they are involved in important biological functions. However, recent research has shown that many of the DNA segments bound by proteins that can influence gene expression are not under strong purifying selection.

To find out if the DNA segments bound by GATA1 are capable of regulating genes, the scientists investigated the extent to which they could trigger the expression of a gene after introducing GATA1-bound DNA segments into red blood cells. The scientists cut these GATA1-bound DNA segments out of the mouse's genome and reintroduced them into mouse red blood cells along with a gene from a firefly that is responsible for the insect's ability to produce light. The team's goal was to determine if GATA1 would bind to the regulatory regions and turn on the activity of the firefly gene.

"We wanted to know if the level of gene activity would change and if it did change, how much it would change," said Hardison. The team found that 52 percent of the GATA1-bound regions increased gene activity two-fold and 28 percent of the regions increased gene activity three-fold. "We think that some of the regions that do not appear to be functional may function only together with other regulatory regions, or they could just be parking lots, or storage areas, for proteins," Hardison said.

The researchers hope that their findings will help other researchers to develop drugs to treat people who suffer from sickle-cell anemia and other blood disorders. In particular, the new results will help researchers to identify functional DNA segments from the large number that are bound by a particular protein. The GATA1 protein plays an important role in the development of red blood cells by controlling the switch from the fetal form of hemoglobin, which is produced during the second two trimesters of pregnancy, to the adult form, which begins to be produced after birth. Most adults do not produce the fetal form of hemoglobin, and it is the improper functioning of the adult form of hemoglobin that is responsible for many blood disorders.

"If someone could find a way to get the fetal forms to stay active in adults who suffer from blood disorders, it could really help them," said Hardison. "I am optimistic that our results will provide better information to researchers who specialize in developing drugs for people with blood disorders."