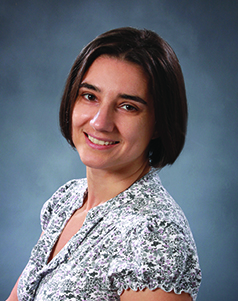 Reka Albert, Distinguished Professor of Physics and Biology at Penn State, has been named a Fellow of the American Association for the Advancement of Science (AAAS), one of ten Eberly College of Science faculty members to receive this honor this year. Election as a Fellow is an honor bestowed by peers upon members of the AAAS, the world's largest general scientific society and the publisher of the journal Science. Albert was selected for “distinguished contributions to the field of systems biology and network analysis, particularly for work on signaling networks, pathway dynamics and complex inter-dependent networks.”

Albert's research focuses on the organization and dynamics of complex biological systems. Her research group develops computational representations called network models to investigate a broad range of biological questions. Experimental measurements by collaborators or from the literature guide the development of the network models, which in turn are used to make predictions about the dynamics of a system and to guide further experiments. Using this combined approach with experimental and theoretical components, Albert and her collaborators investigate areas such as the response of plants to environmental change, the genetic and signaling pathways used by cancer cells to hijack the body's developmental processes, and the interactions between plants and pollinating insects. Her papers have been published in physics journals as well as in journals devoted to computational or systems biology.

Albert's research accomplishments have been recognized with many awards. She was elected a Fellow of the Network Science Society in 2018 and as an external member of the Hungarian Academy of Sciences in 2016. She was honored with a Distinguished Alumna Award by the University of Notre Dame Graduate School in 2016. Albert was honored with the title of Distinguished Professor of Physics and Biology by Penn State in 2015. She received the Maria Goeppert Mayer Award from the American Physical Society in 2011. She was elected a Fellow of the American Physical Society in 2010 and she received a National Science Foundation CAREER Award in 2007, a Sloan Research Fellowship in 2004, and the Shaheen Graduate School Award from the University of Notre Dame in 2001. Albert sits on more than ten editorial and advisory boards. She serves as a reviewer for more than 20 journals and several foundations, including the National Science Foundation and the National Institutes of Health. She was recently recognized as an Outstanding Reviewer by the American Physical Society.