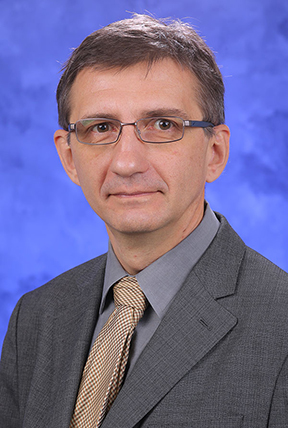 Nikolay Dokholyan, G. Thomas Passananti Professor and vice chair for research, Department of Pharmacology and Department of Biochemistry and Molecular Biology, has been named a Fellow of the American Association for the Advancement of Science (AAAS), one of ten Eberly College of Science faculty members to receive the honor this year. Election as a Fellow is an honor bestowed by peers upon members of the AAAS, the world's largest general scientific society and the publisher of the journal Science. Dokholyan was selected for “distinguished contributions to the field of computational biology and biophysics, particularly for developing technologies that illuminate biological mechanisms using principles of physics.”

Dokholyan leads a translational systems research group in pharmacology at the Penn State College of Medicine focused on neurodegeneration and cancer. The Dokholyan laboratory uses several integrated computational and experimental strategies to understand, sense (recognize and report), and control aberrant biological molecules, and uncover the etiologies of human diseases such as amyotrophic lateral sclerosis (ALS), and Alzheimer’s and Parkinson’s diseases. For the past two decades, the Dokholyan lab has been developing approaches for dynamic simulations and modeling of molecular structures, allowing them to study biological molecules at time scales relevant to biological systems. These approaches uniquely integrate rapid physical dynamics simulations, experiments, and molecular modeling and design, allowing them to make significant breakthroughs in understanding the etiologies of cystic fibrosis and ALS. Such integration allows the Dokholyan lab to perform translational research: from understanding molecular players at the atomic level to probing their function at the cellular and organism level, as well as discovering molecular therapeutic strategies to affect these players.

Dokholyan was named a Fellow of the American Physical Society in 2013. He received the March of Dimes Basil O'Connor Starter Scholar Research Award from 2004 to 2006, the University of North Carolina at Chapel Hill IBM Junior Faculty Development Award in 2004, and a UNC Research Council Award in 2003. Dokholyan has published over 250 peer-reviewed articles and 20 book chapters.

Prior to joining the faculty at Penn State in 2018, Dokholyan was the director of the Center for Computational and Systems Biology and the graduate director of the Program in Molecular and Cellular Biophysics at the University of North Carolina at Chapel Hill. He joined the Department of Biochemistry and Biophysics in the UNC School of Medicine as an assistant professor in 2002, was promoted to associate professor in 2008, and to full professor in 2011. In 2014, Dokholyan was named Michael Hooker Distinguished Professor at UNC. Prior to that, Dokholyan was a National Institutes of Health NRSA Postdoctoral Fellow in the Harvard University Department of Chemistry and Chemical Biology from 1999 to 2002. He earned a doctoral degree in physics at Boston University in 1999, and a master’s and bachelor’s degree in physics at the Moscow Institute of Physics and Technology, Russia, in 1994 and 1992, respectively.