New planet found to be hotter than most stars 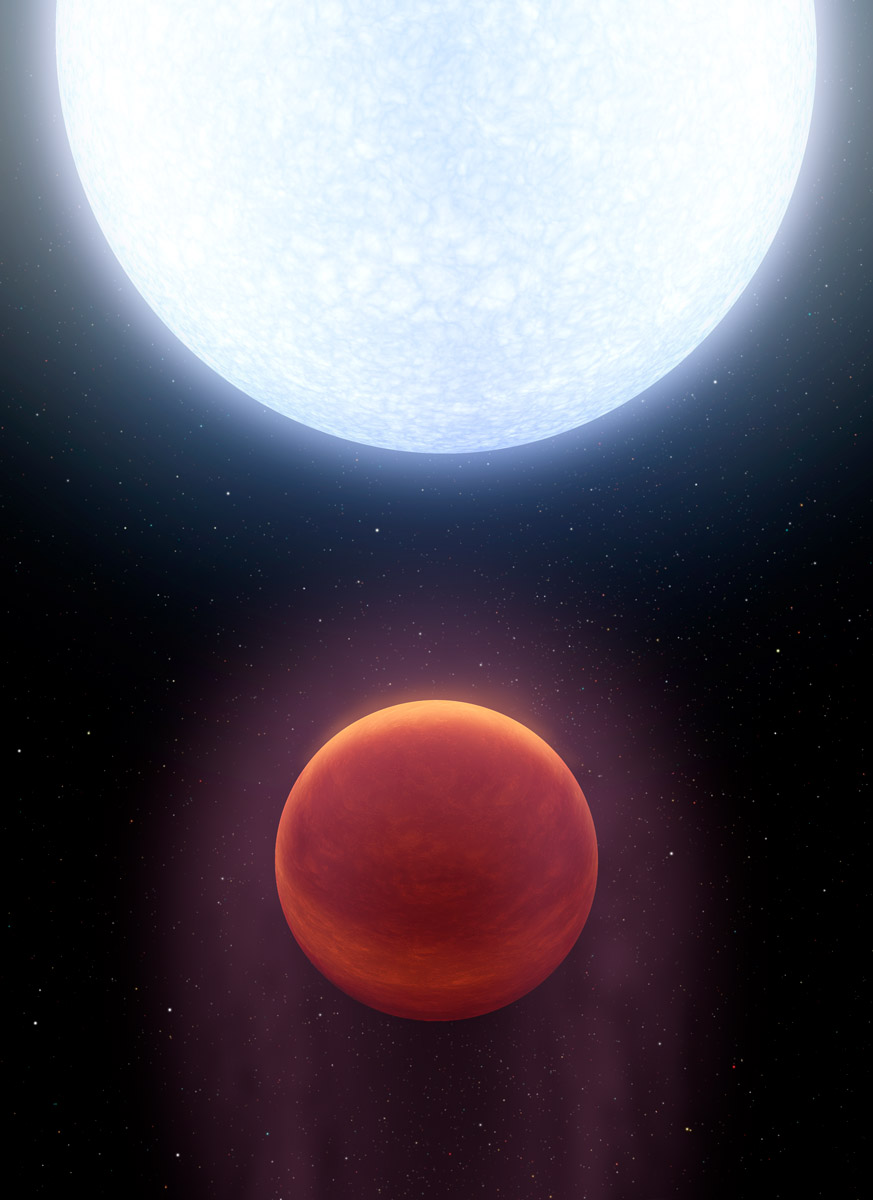 A newly discovered Jupiter-like world is so hot that even its nights are like the flame of a welding torch. Planet KELT-9b is hotter than most stars. With a day-side temperature of more than 7,800 degrees Fahrenheit (4,600 Kelvin), it is only about 2,000 degrees Fahrenheit (1,200 Kelvin) cooler than our own sun. Credit: R. Hurt (IPAC), NASA/JPL-Caltech

A newly discovered Jupiter-like world is so hot that even its nights are like the flame of a welding torch. The gas giant has a “year” only 1.5 days long, and may have a tail like a comet. Planet KELT-9b is hotter than most stars. With a day-side temperature of more than 7,800 degrees Fahrenheit (4,600 Kelvin), it is only about 2,000 degrees Fahrenheit (1,200 Kelvin) cooler than our own sun.

“At these temperatures, the fundamental component of KELT-9b’s atmosphere will be blasted apart into individual atoms during the day,” said Thomas Beatty, a research scientist at Penn State University and a coauthor on the study. This element is hydrogen, which usually exists as a pair of two hydrogen atoms. “Then as night falls, all those hydrogen atoms will try and get back together, creating an inferno at dusk,” he said. “On Earth, this same process is used to create one of the hottest welding flames known.”

In this week’s issue of the journal Nature, an international research team including astronomers from The Ohio State University, Vanderbilt University, and Penn State University describes this planet and some of its very unusual features.

For instance, it is a gas giant 2.8 times more massive than Jupiter, but only half as dense because the extreme radiation from its host star has caused its atmosphere to puff up like a balloon. And because it is tidally locked to its star -- as the Moon is to Earth -- the day side of the planet is perpetually bombarded by radiation from its star and, as a result, is so hot that molecules such as water, carbon dioxide, methane and hydrogen can’t form there. The properties of the night side are still mysterious -- molecules may be able to form there, but probably only temporarily.

“It’s a planet by any of the typical definitions based on mass, but its atmosphere is almost certainly unlike any other planet we’ve ever seen just because of the temperature of its day side,” said Scott Gaudi, professor of astronomy at The Ohio State University and a leader of the study.

KELT-9b orbits a star, dubbed KELT-9, that is more than twice as large and nearly twice as hot as our sun. Keivan Stassun, a professor of physics and astronomy at Vanderbilt who directed the study with Gaudi said, “KELT-9 radiates so much ultraviolet radiation that it may completely evaporate the planet. Or, if gas giant planets like KELT-9b possess solid rocky cores as some theories suggest, the planet may be boiled down to a barren rock, like Mercury.”

That is, if the star doesn’t grow to engulf it first. “KELT-9 will swell to become a red giant star in about a billion years,” said Stassun. “The long-term prospects for life, or real estate for that matter, on KELT-9b are not looking good.”

Given that its atmosphere is constantly blasted with high levels of ultraviolet radiation, the planet may even be shedding a tail of evaporated planetary material like a comet, Gaudi added. While Gaudi and Stassun spend a lot of time developing missions designed to find habitable planets in other solar systems, the scientists said there’s a good reason to study worlds that are unlivable in the extreme.

“As has been highlighted by the recent discoveries from the MEarth collaboration, the planet around Proxima Centauri, and the astonishing system discovered around TRAPPIST-1, the astronomical community is clearly focused on finding Earthlike planets around small, cooler stars like our sun. They are easy targets and there’s a lot that can be learned about potentially habitable planets orbiting very-low-mass stars in general. On the other hand, because KELT-9b’s host star is bigger and hotter than the sun, it complements those efforts and provides a kind of touchstone for understanding how planetary systems form around hot, massive stars,” Gaudi said.

Stassun added, “As we seek to develop a complete picture of the variety of other worlds out there, it’s important to know not only how planets form and evolve, but also when and under what conditions they are destroyed.”

A newly discovered Jupiter-like world is so hot that even its nights are like the flame of a welding torch. Planet KELT-9b is hotter than most stars. With a day-side temperature of more than 7,800 degrees Fahrenheit (4,600 Kelvin), it is only about 2,000 degrees Fahrenheit (1,200 Kelvin) cooler than our own sun. Credit: R. Hurt (IPAC), NASA/JPL-Caltech

The astronomers hope to take a closer look at KELT-9b with other telescopes—including Spitzer, the Hubble Space Telescope (HST), and eventually the James Webb Space Telescope. Observations with HST would enable them to see if the planet really does have a cometary tail, and allow them to determine how much longer that planet will survive its current hellish condition.

“Looking at KELT-9b with Hubble will be a once-in-a-lifetime opportunity. It’s the only place in the universe where we can watch an entire planet go through a phase-change from day to night,” said Beatty, who is leading the efforts to observe KELT-9b in more detail.

How was this new planet found?

In 2014, astronomers using the KELT-North telescope at Winer Observatory in Arizona noticed a tiny drop in the star’s brightness—only about half of one percent—indicating that a planet may have passed in front of the star. The brightness dipped once every 1.5 days, which means the planet completes a “yearly” circuit around its star every 1.5 days.

Subsequent observations confirmed the signal to be due to a planet, and revealed it to be what astronomers call a “hot Jupiter” -- the ideal kind of planet for the KELT telescopes to spot.

KELT is short for “Kilodegree Extremely Little Telescope.” Astronomers at Ohio State, Vanderbilt University, and Lehigh University jointly operate two KELTs (one each in the Northern and Southern Hemispheres) in order to fill a large gap in the available technologies for finding extrasolar planets.

Other telescopes are designed to look at very faint stars in much small sections of the sky, and at very high resolution. The KELTs, in contrast, look at millions of very bright stars at once, over broad sections of sky, and at low resolution -- a low-cost means of planet hunting using mostly off-the-shelf technology. A traditional astronomical telescope costs millions of dollars to build, while the hardware for a KELT telescope runs less than $75,000.

The study was largely funded by the National Science Foundation (NSF) through an NSF CAREER Grant, NSF PAARE Grant and an NSF Graduate Research Fellowship. Additional support came from NASA via the Jet Propulsion Laboratory and the Exoplanet Exploration Program; the Harvard Future Faculty Leaders Postdoctoral Fellowship; Theodore Dunham, Jr., Grant from the Fund for Astronomical Research; and the Japan Society for the Promotion of Science.