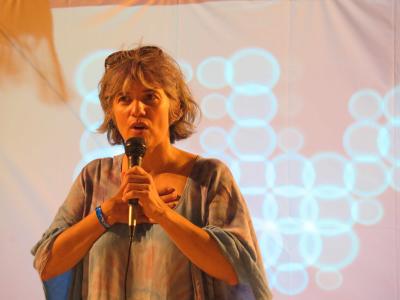 Monica Medina, professor of biology at Penn State, has been named a Fellow of the American Association for the Advancement of Science (AAAS), one of two Eberly College of Science faculty members to receive this honor this year. Election as a Fellow is an honor bestowed by peers upon members of the AAAS, the world's largest general scientific society, for their extraordinary achievements in advancing science. Medina was recognized for “pioneering contributions to understanding the evolution and molecular microbial ecology of coral symbiosis and coral reef sensitivity to global change and for dedication to mentoring diverse young scientists.”

Medina focuses her research on different aspects of coral-algal symbiosis and coral-microbe interactions, including the relationship between the Upside-down jellyfish (Cassiopea) and algae in the family Symbiodinaceae among other key Caribbean species. Using a combination of experimental field-based approaches with molecular and genomic tools, Medina also conducts field-research of The Varadero Reef in Colombia—a reef full of corals despite the poor water quality.

Fellows will receive an official certificate and a pin to commemorate their election and will be celebrated later this year during an in-person gathering when it is feasible from a public health and safety perspective. AAAS was founded in 1848 and includes more than 250 affiliated societies and academies of science, serving 10 million individuals. The nonprofit AAAS is open to all and fulfills its mission to “advance science and serve society” through initiatives in science policy, international programs, science education, public engagement, and more. For additional information visit the AAAS website.