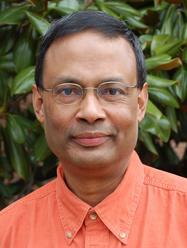 Sankar Das Sarma, the Richard E. Prange Chair in Physics and a Distinguished University Professor at the University of Maryland, will present the 2023 Russel Marker Lectures in the Physical Sciences on January 26 and 27 on the Penn State University Park campus. The free public lectures are sponsored by the Penn State Eberly College of Science.

The series includes a public lecture intended for a general audience, titled “Majorana zero modes and topological quantum computation: What, why, how, when?” which will be held at 3:45 p.m. Thursday, January 26th in 101 Osmond Building. Refreshments will be served at 3:15 p.m. in the Osmond-Davey Overpass. Das Sarma will also give a specialized lecture titled “Condensed Matter Seminar: Graphene Superconductivity,” at 10:15 a.m. on Friday, January 27th in 339 Davey Building.

In the lecture intended for a general audience, Das Sarma will discuss the quest for quantum computers, which may revolutionize today's technology. Of various proposals, one based on exotic Majorana particles has been adapted by Microsoft Corporation as its quantum computing platform. Das Sarma will explain its advantages/disadvantages from a practical perspective and discuss many new concepts and advances from both theoretical and experimental perspectives that might support quantum computing.

Das Sarma is a pre-eminent and highly influential theoretical physicist with research interests in the quantum theory of matter, quantum field theories, condensed matter physics, statistical mechanics, and quantum information. His publications and expertise are broad, ranging over topics as disparate as topological quantum computation, fluctuations in financial markets, physics of high-speed transistors, and exotic quantum properties of solids and atoms at ultra-low temperatures and in ultrahigh magnetic fields. In particular, Das Sarma and collaborators predicted long sought Majorana fermions in semiconductor nanowires, which has led to intense experimental activity as well as proposals for quantum computation. He has mentored more than 150 Ph.D. students and postdoctoral fellows at the University of Maryland over the last 40 years and has published almost 800 papers in scientific journals garnering more than 100,000 citations.

Das Sarma is a Fellow of the Joint Quantum Institute and the Director of the Condensed Matter Theory Center at the University of Maryland. He earned a doctoral degree at Brown University in 1979 and has been a faculty member at University of Maryland since 1980. His undergraduate degree is from Presidency College in Calcutta (Kolkata), India, where he was born.

The Marker lectures were established in 1984 through a gift from Russell Earl Marker, professor emeritus of chemistry at Penn State, whose pioneering synthetic methods revolutionized the steroid-hormone industry and opened the door to the current era of hormone therapies, including the birth-control pill. The Marker endowment allows the Penn State Eberly College of Science to present annual Marker lectures in astronomy and astrophysics, the chemical sciences, evolutionary biology, genetic engineering, the mathematical sciences, and physics.