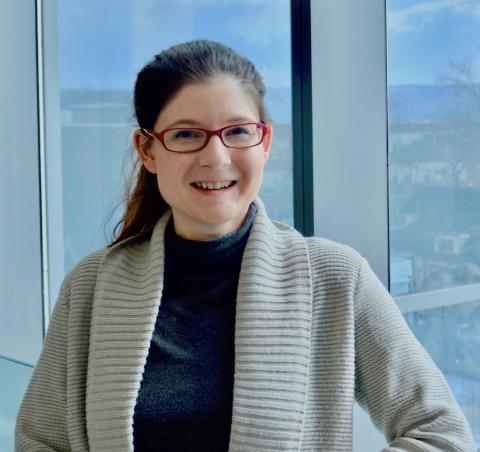 Lauren Zarzar, assistant professor of chemistry, has been honored with a 2020 Alfred P. Sloan Research Fellowship in chemistry, in recognition of her research in dynamic and adaptive materials, including areas of reconfigurable soft matter and laser direct writing of microscale materials. The Fellowships, awarded annually by the Alfred P. Sloan Foundation, seek to stimulate fundamental research by early-career scientists and scholars of outstanding promise.

"I am very honored to have been selected for this prestigious fellowship and grateful that the Alfred P. Sloan Foundation continues to support young scientists like myself in our fundamental research pursuits,” said Zarzar.

The 126 Sloan Research Fellows for 2020 are drawn from a diverse range of more than 60 institutions across the U.S. and Canada. “There is a wide variety of winning institutions, but each one has successfully attracted, retained, and nurtured truly promising junior faculty,” says Daniel L. Goroff, director of the Sloan Research Fellowship program. “The Alfred P. Sloan Foundation is proud to join with these institutions in recognizing and supporting scientific leaders of the future.”

Candidates for Sloan Research Fellowships must be nominated by their fellow scientists and winners are selected by independent panels of senior scholars on the basis of a candidate’s research accomplishments, creativity, and potential to become a leader in his or her field. Nearly 1000 researchers are nominated each year for 126 fellowship slots.  Winners receive a two-year, $75,000 fellowship which can be spent to advance the Fellow’s research.

“To receive a Sloan Research Fellowship is to be told by your fellow scientists that you stand out among your peers,” says Adam F. Falk, president of the Alfred P. Sloan Foundation. “A Sloan Research Fellow is someone whose drive, creativity, and insight makes them a researcher to watch.”

Zarzar’s research focuses on developing dynamic materials that sense and adapt to their surroundings. Her recent discovery—a previously unrecognized mechanism for generating structural iridescent color—was featured on the cover of the journal Nature. Her research group has found ways to control complex fluids and emulsions to harness liquids as materials in new ways. Zarzar’s research in this area is supported by the National Science Foundation, Army Research Office, and the Materials Research Science and Engineering Centers.

Zarzar was honored with the Rustum and Della Roy Innovation in Materials Research Award from the Penn State Materials Research Institute, a Packard Fellowship for Science and Engineering, and recognized as one of the 2019 Chemical & Engineering News (C&EN) Talented 12 in 2019. Her previous awards and honors include the Unilever Award from the Division of Colloid and Surface Chemistry of the American Chemical Society (ACS) in 2019; the Army Early Career Award for Scientists and Engineers (Army-ECASE), the Army Research Office Young Investigator Program Award (ARO-YIP), the American Chemical Society Petroleum Research Fund Doctoral New Investigator (ACS-PRF), the 3M Non-Tenured Faculty Award, and the Gladys Snyder Award from Penn State in 2018; and the Virginia S. and Philip L. Walker Jr. Faculty Fellowship from Penn State in 2016.

Prior to joining the faculty at Penn State, Zarzar was a postdoctoral researcher in chemistry at the Massachusetts Institute of Technology from 2013 to 2016. She earned a doctoral degree in chemistry at Harvard University in 2013 and bachelor's degrees in chemistry and in economics at the University of Pennsylvania in 2008.

The Alfred P. Sloan Foundation is a not-for-profit, mission-driven grantmaking institution dedicated to improving the welfare of all through the advancement of scientific knowledge. Founded in 1934 by industrialist Alfred P. Sloan Jr., the Foundation makes grants each year in three broad areas: direct support of research in science, technology, engineering, mathematics, and economics; initiatives to increase the quality and diversity of scientific institutions; and efforts to enhance and deepen public engagement with science and scientists. Sloan Foundation grantmaking helped create some of the country’s most prestigious and enduring scientific institutions, including Memorial Sloan Kettering Cancer Center, the MIT Sloan School of Management, and the Sloan Digital Sky Survey. Sloan support has also played a critical role in the early development of many scientific fields, including cognitive science, behavioral economics, and indoor microbial ecology. The Foundation strives to be guided in all its actions by the values of the scientific enterprise: impartiality, empiricism, curiosity, rigor, and the conviction that a reasoned, systematic understanding of the forces of nature and society, when applied inventively and wisely, can lead to a better world for all.