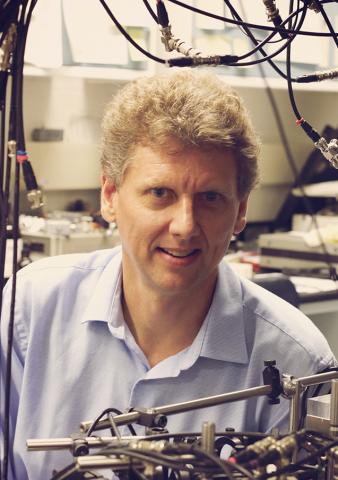 Kurt Gibble, professor of physics at Penn State, has been named a Fellow of the American Association for the Advancement of Science (AAAS), one of ten Eberly College of Science faculty members to receive the honor this year. Election as a Fellow is an honor bestowed by peers upon members of the AAAS, the world's largest general scientific society and the publisher of the journal Science. Gibble was selected for “distinguished contributions to the science and technology of atomic clocks and novel studies of ultra-cold atom-atom scattering.”

Gibble has made major contributions to the development of atomic fountain clocks by modeling the physical effects that shift the frequency of the clocks. Gibble and his collaborators modeled the atomic interactions with microwave fields and the Doppler shifts of the atoms in the clock, and subsequently led to a new design of the microwave cavity used in these clocks. Gibble's theoretical models and numerical calculations have helped to improve the accuracy of the atomic clocks of France, the United Kingdom, Germany, Korea, and more recently Canada and Poland, reducing their uncertainties to nearly one part in 1016, meaning they would neither lose nor gain a second in more than 100 million years.

Gibble was named an Institute of Electrical and Electronics Engineers (IEEE) Fellow in 2019. He previously was honored with the European Frequency and Time Award in 2013 for his research advancing the accuracy of the atomic clocks that keep international atomic time and as a Research in Paris laureate by the City of Paris, France in 2009. In 2005, he was elected as a Fellow of the American Physical Society. He received a Yale Junior Faculty Fellowship in 1996 and a National Science Foundation Young Investigator Award in 1994.

Gibble earned his doctoral degree in physics at JILA at the University of Colorado in 1990 and his bachelor's degree, with highest honors, in engineering physics at Lehigh University in 1986. He was a research associate at Stanford University from 1991 to 1993 with Nobel laureate Steven Chu and then a faculty member at Yale University, where he served as assistant professor from 1993 to 1998 and as associate professor from 1998 to 2001. Gibble joined the Penn State faculty in 2001.