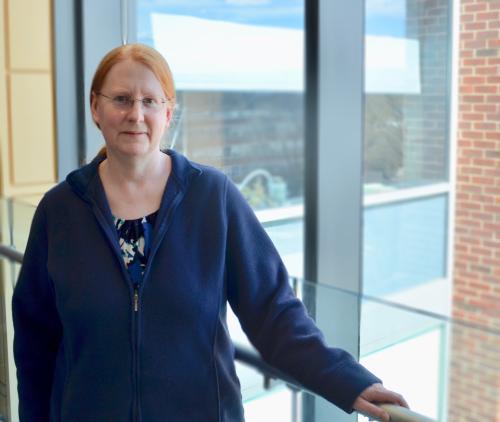 Christine Keating, distinguished professor of chemistry, has been named the Shapiro Professor of Chemistry. The professorship encourages new levels of achievement among promising faculty and provides resources to pursue new lines of research or innovative teaching methods.  The professorship was established by the late Edward Shapiro, a 1937 alumnus of the department, and his wife Antoinette Post Shapiro, an alumnus of the College of Liberal Arts.

Keating's research applies the approaches of colloid and interface chemistry—a science that seeks to understand the physical properties of various high surface-area materials such as emulsions and nanoparticles—to problems in biology and materials science. She is particularly interested in how the structural organization of materials dictates their physical and chemical properties. Her lab builds artificial cells to model the internal organization of living cells using such methods as liquid-liquid phase separation and molecular self-assembly. By improving understanding of how and why subcellular compartmentalization occurs, Keating's research could result in new ways to target drugs, construct bioinspired materials, and perhaps even understand how the first cells arose.

Keating also studies assemblies of nonbiological materials such as inorganic nanospheres or nanowires, in which organization arises due to the interactions between particles or between particles and their surroundings. Her lab combines top-down and bottom-up approaches to direct the organization of particles, with a current emphasis on generating reconfigurable optical materials with functions ranging from imaging to lasers.

Keating has published more than 100 scientific papers and holds six patents related to her research. She is a Fellow of the American Association for the Advancement of Science (AAAS) and currently sits on the Scientific Advisory Board for the Charles E. Kaufman Foundation. Keating has received numerous awards in recognition of her teaching and research, including a Faculty Scholar Medal from Penn State in 2017, the Camille Dreyfus Teacher-Scholar Award from the Camille and Henry Dreyfus Foundation in 2005, a Beckman Young Investigator Award from the Arnold and Mabel Beckman Foundation in 2004, a Unilever Award for Outstanding Young Investigator in Colloid and Surfactant Science in 2004, a Sloan Research Fellowship from the Alfred P. Sloan Foundation in 2004, and a CAREER Award from the National Science Foundation in 2003. She was named a distinguished professor of chemistry at Penn State in 2020.