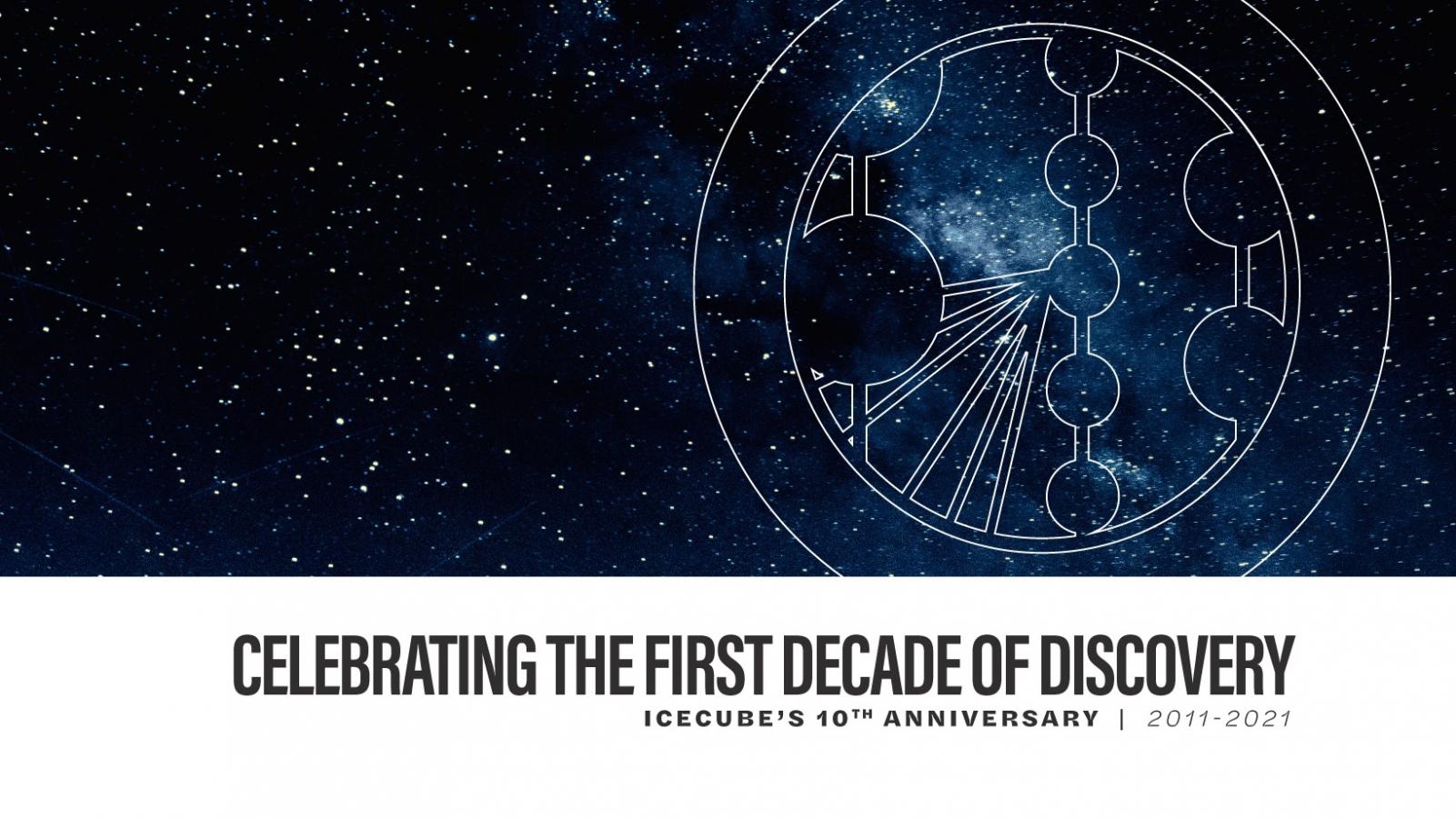 For the last ten years, the unconventional IceCube Neutrino Observatory has been watching the cosmos, looking for signals of passing astrophysical neutrinos. These mysterious, tiny, extremely lightweight particles are created by some of the most energetic and distant phenomena in the cosmos. By identifying these neutrinos, the multi-institution IceCube collaboration—which includes several researchers at Penn State—can glimpse hidden parts of the universe.

The observatory itself is located at the South Pole, one of the coldest, driest, and most isolated places on Earth, and uses the Antarctic ice as an integral part of its detection system. During construction, crews drilled 86 holes nearly two-and-a-half kilometers deep and lowered a cable strung with 60 basketball-sized light detectors into each hole. The result was a hexagonal grid of sensors embedded in a cubic kilometer of ice about a mile below the surface of the Antarctic ice sheet. On December 18, 2010, the 5,160th light sensor was deployed in the ice, completing the construction of the IceCube Neutrino Observatory.

“To detect neutrinos, we need a very large, kilometer-scale, detector made of optically clear material, and ice is an excellent option,” said Doug Cowen, professor of physics at Penn State and a charter member of the IceCube collaboration. “Because neutrinos travel through space without being deflected or absorbed, they have a unique ability to provide accurate information about where they came from in the distant universe, even billions of light-years away.”

The observatory began full operations on May 13, 2011, when the detector took its first set of data as a completed instrument, and it has been continuously collecting data for the last decade. During its first few years of operation, IceCube accumulated vast amounts of data, but it wasn’t until 2013 that the observatory yielded its first major results. That year, the collaboration announced the first evidence for neutrinos from outside our galaxy with the detection of two very energetic neutrino events and, soon after, the observation of 26 additional very high energy events.

Since then, the collaboration has observed even more astrophysical neutrinos and made strides to identify their potential sources. In 2017, the collaboration detected a neutrino that, for the first time, they were able to track back to its source—a blazar called TXS 0506+056. This marked the first evidence of a high-energy cosmic ray from an extragalactic source.

“Thanks to our combined efforts with the Astrophysical Multimessenger Observatory Network (AMON), an automatic alert was issued within seconds of the neutrino’s detection in 2017, allowing observatories around the world to follow-up the detection in various wavelengths of light,” said Cowen. “This allowed us to gain a more complete understanding of its source and provided an excellent example of the benefits of multimessenger astronomy.”

In addition to helping develop the cyberstructure for these real-time alerts, the Penn State team has played a leading role in the analysis of data from IceCube’s DeepCore low-energy extension. They are also interested in studying a particular type or "flavor" of neutrino called the tau neutrino, which carries a strong imprint of astrophysical origin.

The IceCube Neutrino Observatory has been watching the cosmos for 10 years, looking for signals of passing astrophysical neutrinos that provide information about the distant universe. The multi-institution IceCube collaboration includes several researchers from Penn State.

The IceCube collaboration has grown to include more than 350 scientists from 53 institutions in 12 countries across five continents. Together, the collaboration has proven time and again the value of capturing perhaps the most elusive particles in the universe.

“The National Science Foundation took a dual gamble on IceCube related to the performance of the technology and the sensitivity of the instrument as a neutrino telescope,” said Francis Halzen, principal investigator of IceCube and professor at the University of Wisconsin–Madison, home of the Wisconsin IceCube Particle Astrophysics Center (WIPAC) where IceCube is headquartered. “The IceCube Collaboration has delivered a decade of data that continues to validate the high risk and high reward approach.”

The unusual instrument continues to expand its science reach, with leading results on neutrino properties, dark matter, cosmic rays, and fundamental physics. Though the pandemic has slightly altered the timeline, the National Science Foundation has provided funding for the next stage of our South Pole detector, the IceCube Upgrade, which will pave the way to the proposed larger, high-energy extension, IceCube-Gen2.

The IceCube Neutrino Observatory is funded primarily by the National Science Foundation (OPP-1600823 and PHY-1913607) and is headquartered at the Wisconsin IceCube Particle Astrophysics Center, a research center of UW–Madison in the United States. IceCube’s research efforts, including critical contributions to the detector operation, are funded by agencies in Australia, Belgium, Canada, Denmark, Germany, Japan, New Zealand, Republic of Korea, Sweden, Switzerland, the United Kingdom, and the United States. The IceCube EPSCoR Initiative (IEI) also receives additional support through NSF-EPSCoR-2019597. IceCube construction was also funded with significant contributions from the National Fund for Scientific Research (FNRS & FWO) in Belgium; the Federal Ministry of Education and Research (BMBF) and the German Research Foundation (DFG) in Germany; the Knut and Alice Wallenberg Foundation, the Swedish Polar Research Secretariat, and the Swedish Research Council in Sweden; and the University of Wisconsin–Madison Research Fund in the U.S.

AMON has been funded by the National Science Foundation (PHY-1708146) and the Penn State Institute for Gravitation and the Cosmos. Initial development of the network was supported by the Penn State Office of the Senior Vice President for Research and the Eberly College of Science.