Astronomers using NASA's Swift satellite and the Fermi Gamma-ray Space Telescope are seeing frequent blasts from an object that is 30,000 light-years from Earth. The high-energy fireworks are X-ray and gamma-ray flares coming from a rapidly-spinning and super-magnetic remnant of an exploded star -- an unusual type of stellar cinder called a soft-gamma-ray repeater.

"We have observed periods when this remarkable object has erupted with dozens -- even more than a hundred -- flares in as little as 20 minutes," says Loredana Vetere, a postdoctoral scholar at Penn State University, who is coordinating the Swift observations. "The most intense flares emitted more total energy in less than half a second than our Sun does in 20 years."

The source began a series of modest eruptions on 3 October 2008, but appeared to settle down. Then, on 22 January 2009, it roared back to life with a more intense round of flares. "As a result of its recent activity, this object has been classified as a soft-gamma-ray repeater. It it is only the sixth soft-gamma-ray repeater discovered so far," Vetere said. The object is continuing to erupt and the scientists are continuing to observe it.

Swift's X-Ray Telescope captured the first "light echoes" ever seen from a soft-gamma-ray repeater during the latest flaring episode. The Swift satellite is controlled by Penn State University from its Mission Operations Center at University Park, and Penn State led in the development and assembly of two Swift's three telescopes, including the X-Ray Telescope. The X-ray data from Swift have begun to show what appear to be expanding halos around the object.

"X rays from the brightest bursts scatter off of dust clouds between us and the star," said team member Jules Halpern, of Columbia University, who acquired the images with Swift. Multiple rings form as the X rays interact with dust clouds at different distances, with closer clouds producing larger rings. "We don't really know the distance to this object as well as we would like," Halpern added. "These images will help us nail that down -- and also will help us determine the distance to the dust clouds." Both the rings and their apparent expansion are an illusion caused by the finite speed of light and the longer path the scattered light must travel.

"Swift's extremely agile and rapid ability to respond to new events is absolutely crucial to making discoveries like this," said John Nousek, a professor of astronomy and astrophysics at Penn State and Swift's mission operations director. "I am extremely proud of our dedicated team of scientists and engineers at Penn State's Mission Operations Center, which controls the Swift observatory. This team responds quickly every day or night to make these observations possible."

The Fermi space telescope's Gamma-ray Burst Monitor recorded 68 outbursts from the object in the last week of January 2009. The astronomy team is using the resulting images of the structure within these flares to better understand how such objects can unleash so much energy.

Flares from SGR J1550-5418 also have been detected by NASA's Wind satellite, the joint NASA-Japan Suzaku mission, and the European Space Agency's INTEGRAL satellite. NASA's Einstein X-ray Observatory first detected the object in 1980 in the southern constellation Norma. Then, astronomers cataloged it as 1E 1547.0-5408, and most reports today use this name, but the object now is cataloged as SGR J1550-5418 as a result of its recent confirmation as a soft gamma-ray repeater.

During the past two years, astronomers have identified radio and X-ray pulses from the object. These signals reveal the source to be a spinning neutron star -- the superdense, city-sized remains of an exploded star. Although only about 12 miles across, a neutron star contains more mass than the Sun. While neutron stars typically possess intense magnetic fields, a subgroup has fields 1,000 times stronger. These so-called magnetars have the strongest magnetic fields of any known object in the universe. SGR J1550-5418, which rotates once every 2.07 seconds, holds the record for the fastest-spinning magnetar. Astronomers think magnetars power their flares by tapping into the tremendous energy of their magnetic fields. In 2004, a giant flare from another magnetar, SGR 1806-20, was so intense it measurably affected Earth's upper atmosphere from 50,000 light-years away. 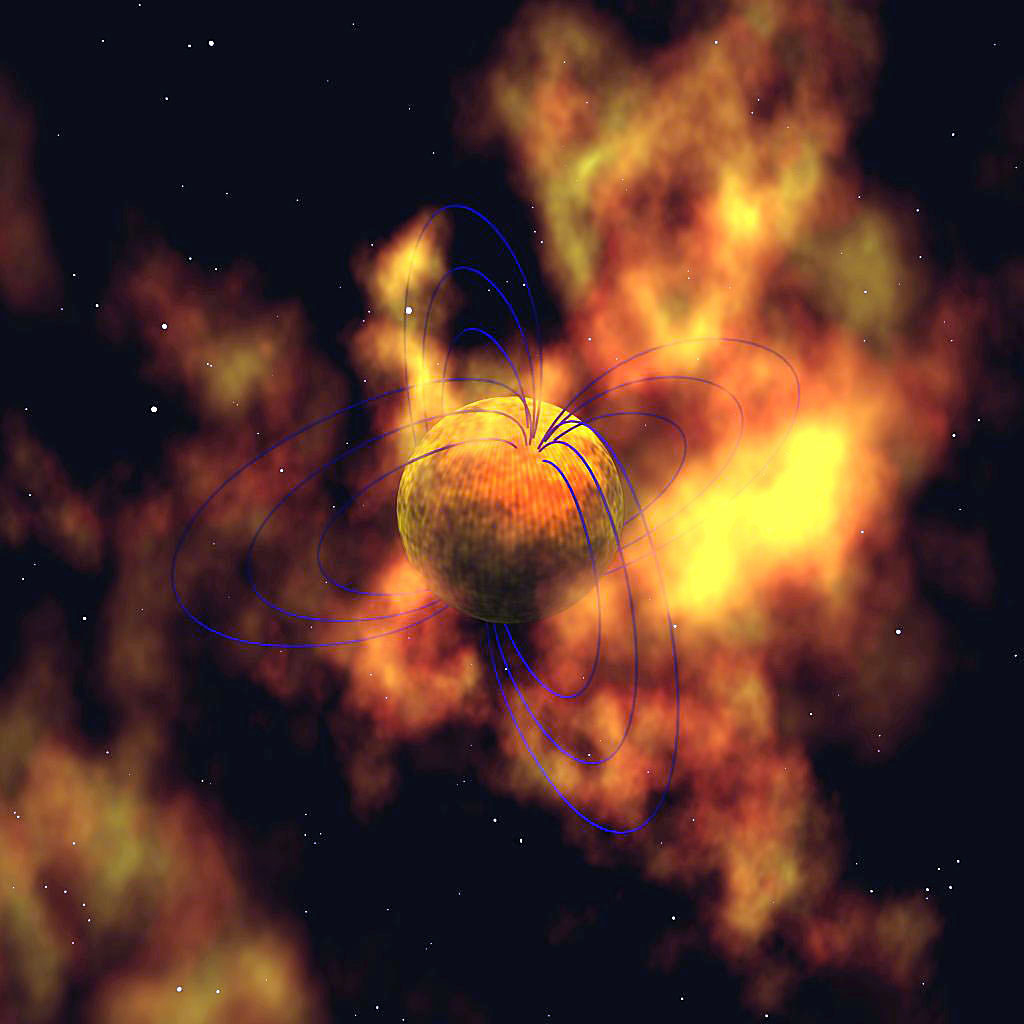 Swift is managed by NASA's Goddard Space Flight Center and is controlled from Penn State's Mission Operations Center at University Park. It was built and is being operated in collaboration with Penn State, the Los Alamos National Laboratory, and General Dynamics in the United States; the University of Leicester and Mullard Space Sciences Laboratory in the United Kingdom; Brera Observatory and the Italian Space Agency in Italy; plus partners in Germany and Japan.

NASA's Fermi Gamma-ray Space Telescope is an astrophysics and particle physics partnership, developed in collaboration with the U.S. Department of Energy, along with important contributions from academic institutions and partners in France, Germany, Italy, Japan, Sweden, and the United States. 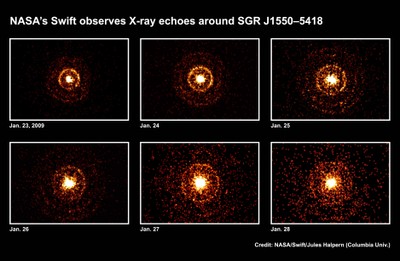