David S. Weiss named a Fellow of the American Association for the Advancement of Science 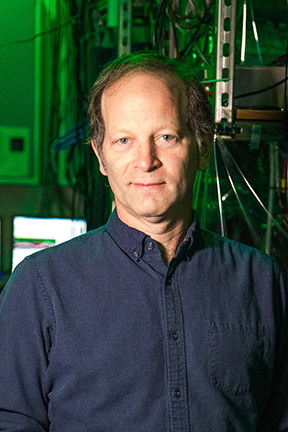 David S. Weiss, professor of physics at Penn State, has been named a Fellow of the American Association for the Advancement of Science (AAAS), one of ten Eberly College of Science faculty members to receive the honor this year. Election as a Fellow is an honor bestowed by peers upon members of the AAAS, the world's largest general scientific society and the publisher of the journal Science. Weiss was selected for “distinguished contributions to atomic physics, particularly for the experimental realization and study of one-dimensional gases, and for development of neutral atom quantum computing.”

Weiss's research involves experiments with laser-cooled atoms in optical lattices and other light traps.  His research group applies this technology in several directions. They are working to develop a quantum computer based on neutral atoms. They use cold atoms to make precise measurements of fundamental constants and to test fundamental symmetries. They also use atoms as model systems to address issues in atomic physics, condensed-matter physics, quantum mechanics, and statistical mechanics.

Weiss was elected to serve as chair of the Division of Atomic, Molecular and Optical Physics (DAMOP) of the American Physical Society (APS) in 2016. He was named a Fellow of the APS in 2007. Weiss won a Penn State Faculty Scholar Medal for Physical Science in 2007, a Packard Fellowship for Science and Engineering in 1997, a Sloan Research Fellowship in 1997, and a National Science Foundation Faculty Early Career Development Award in 1996.