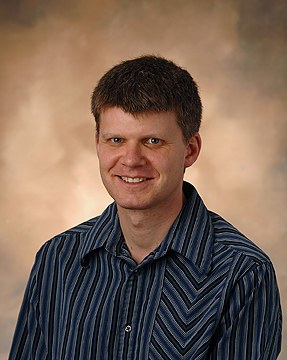 Carsten Krebs, professor of chemistry and of biochemistry and molecular biology, has been named a Fellow of the American Association for the Advancement of Science (AAAS), one of ten Eberly College of Science faculty members to receive this honor this year. Election as a Fellow is an honor bestowed by peers upon members of the AAAS, the world's largest general scientific society and the publisher of the journal Science. Krebs was selected for “creative use of kinetic and spectroscopic methods to understand redox metalloenzymes, and for teaching aspiring practitioners the discipline of bioinorganic chemistry.”

Krebs is a bioinorganic chemist whose research focuses on iron-containing enzymes. He primarily studies the activation of oxygen by non-heme enzymes, which play key roles in human biochemistry and are involved in diverse biological processes, including oxygen sensing, DNA repair, and gene regulation. Krebs has a joint research group with J. Martin Bollinger, Jr., professor of chemistry and of biochemistry and molecular biology. Together, they study the function of these enzymes using a combination of spectroscopic, kinetic, biochemical, and molecular-biological methods. He also collaborates with several other research groups to characterize and model these enzymes using Mössbauer-spectroscopy, a technique that detects minute changes in the energy levels of an atom’s nucleus when exposed to gamma rays.

Krebs is the main organizer of the Penn State Bioinorganic Workshops, which are offered biennially since 2010 to the world-wide community of bioinorganic chemists. The success of these events is in large part due to the enormous help from many others, including Connie Smith, David Blehi, Lorraine Grattan, the entire bioinorganic group at Penn State, and many others.

Krebs earned a doctoral degree in inorganic chemistry at the Max Planck Institute for Radiation Chemistry in Mülheim, Germany in 1997. He earned bachelor's and diploma degrees at Ruhr University in Bochum, Germany in 1991 and 1994, respectively.