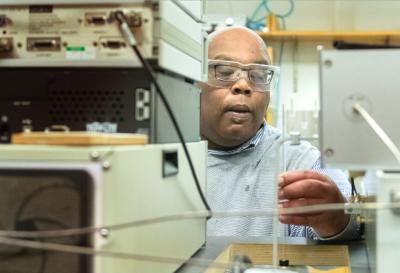 Squire J. Booker, Evan Pugh Professor of Chemistry and of Biochemistry and Molecular Biology at Penn State, Holder of the Eberly Family Distinguished Chair in Science, and investigator with the Howard Hughes Medical Institute, has been honored with the Hans Neurath Award from the Protein Society, the premier international society dedicated to supporting protein research.

The award, sponsored by the Hans Neurath Foundation, honors individuals who have made a recent contribution of exceptional merit to basic protein research. The award will be conferred during the 36th Anniversary Symposium of the society, which will take place July 7 through 10 in San Francisco, California.

“This award recognizes Squire’s outstanding contributions to mechanistic enzymology using radical chemistry,” said Phil Bevilacqua, Distinguished Professor of Chemistry and of Biochemistry and Molecular Biology at Penn State and head of the Department of Chemistry. “His work is known for its depth and elegance, and I’m very pleased to see this well-deserved recognition. We are very fortunate to have Squire in our department.”

Booker was recognized for his work on a particular class of proteins called “radical SAM enzymes” that use a molecule called S-adenosylmethionine and iron-sulfur clusters to catalyze reactions. He investigated the first “radical-SAM” enzyme when he was a postdoctoral researcher and has since led the field with his explorations of many additional enzymes in this family. Booker’s research has provided molecular insight into biosynthetic pathways, enzyme cofactors, drug action and metabolism, and the mechanisms of antibiotic resistance. This information could eventually be applied to the amelioration of diseases like cancer and the development of antibacterial therapies.

"Squire’s accomplishments in the area of structural and mechanistic enzymology over the last decade are nothing short of astonishing,” said J. Martin Bollinger, Jr., professor of chemistry and of biochemistry and molecular biology at Penn State, who nominated Booker for the award. “The chemistry his team has elucidated could never have been imagined when he began his work in this area a quarter-century ago. Even beyond this insight, he has solved technical problems for the entire field, allowing others to make quantum leaps forward! Factoring in that he is a selfless gem of a human being who has done truly creative, highly impactful national service, one can see why the selection committee's choice was an easy one."

In 2004, Booker was recognized as one of 57 of the country's most promising scientists and engineers by President George W. Bush with the Presidential Early Career Award for Scientists and Engineers. He received the award at the White House in recognition of his research on enzyme reactions, including his work on an enzyme involved in the synthesis of unusual fatty acids that are needed by the bacteria responsible for most cases of tuberculosis. Additional awards and honors include the Penn State Faculty Scholar Medal in 2016, the Arthur C. Cope Scholar Award from the American Chemical Society in 2011, and the National Science Foundation Faculty Early Career Development (CAREER) award in 2002.

In 2015, Booker was named an investigator of the Howard Hughes Medical Institute, a science philanthropy organization dedicated to advancing biomedical research and science education for the benefit of humanity. Booker is a Fellow of the American Association for the Advancement of Science (AAAS), a member of the National Academy of Sciences and the American Academy of Arts and Sciences, and an inaugural Fellow of American Society for Biochemistry and Molecular Biology.

Booker earned a bachelor's degree in chemistry at Austin College in 1987, where he was a Minnie Stevens Piper Scholar, and a doctoral degree in biochemistry at the Massachusetts Institute of Technology in 1994. That same year he was awarded a National Science Foundation–NATO Fellowship for postdoctoral studies at Université René Décartes in Paris, France. Later, in 1996, he was awarded a National Institutes of Health Postdoctoral Fellowship for studies at the Institute for Enzyme Research at the University of Wisconsin. He joined the Penn State faculty in 1999.