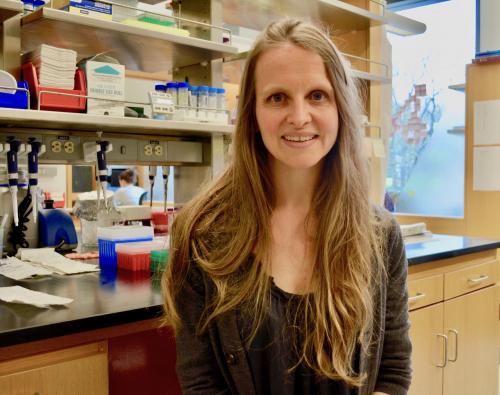 Department of Chemistry Head Phil Bevilacqua added, “this award not only recognizes Amie’s outstanding contributions to mechanistic bioinorganic chemistry, but especially through solving deeply insightful and difficult crystal structures. We are fortunate to have Amie as part of our department."

Boal and her research group study the structural differences between members of large metalloenzyme superfamilies that share common features but promote different reactions or use distinct cofactors. Their objectives include identifying the key outcome-dictating structural characteristics of a given catalyst, reprogramming it for new functions using insight from its structure, and understanding the adaptive advantages in choice of metallocofactor or assembly pathway. The group characterizes stable reactant and product complexes to answer these questions, with an increasing focus on development and implementation of crystallographic approaches to study metalloenzyme reaction intermediates.

Boal’s previous awards and honors include the 2020 C.I. Noll Award for Excellence in Teaching and being named a Camille Dreyfus Teacher-Scholars in 2018 by the Camille and Henry Dreyfus Foundation. The Camille Dreyfus Teacher-Scholars award is presented to chemists that are within the first five years of their academic careers, have created an outstanding independent body of scholarship, and are deeply committed to education. She was awarded a Maximizing Investigators’ Research Award for Early Stage Investigators at the National Institutes of Health, in 2016. Boal was also named a Searle Scholar in 2014, a program that recognizes exceptional young faculty members and supports independent research in medicine, chemistry, and the biological sciences. In 2012, Boal was awarded a National Institutes of Health Pathway to Independence Award.

Prior to joining the faculty at Penn State in 2013, Boal was a postdoctoral scholar at Northwestern University. She earned her doctoral degree at the California Institute of Technology and her bachelor's degree at Pomona College.

Please join the Department of Chemistry in congratulating Amie Boal on this well-deserved honor.