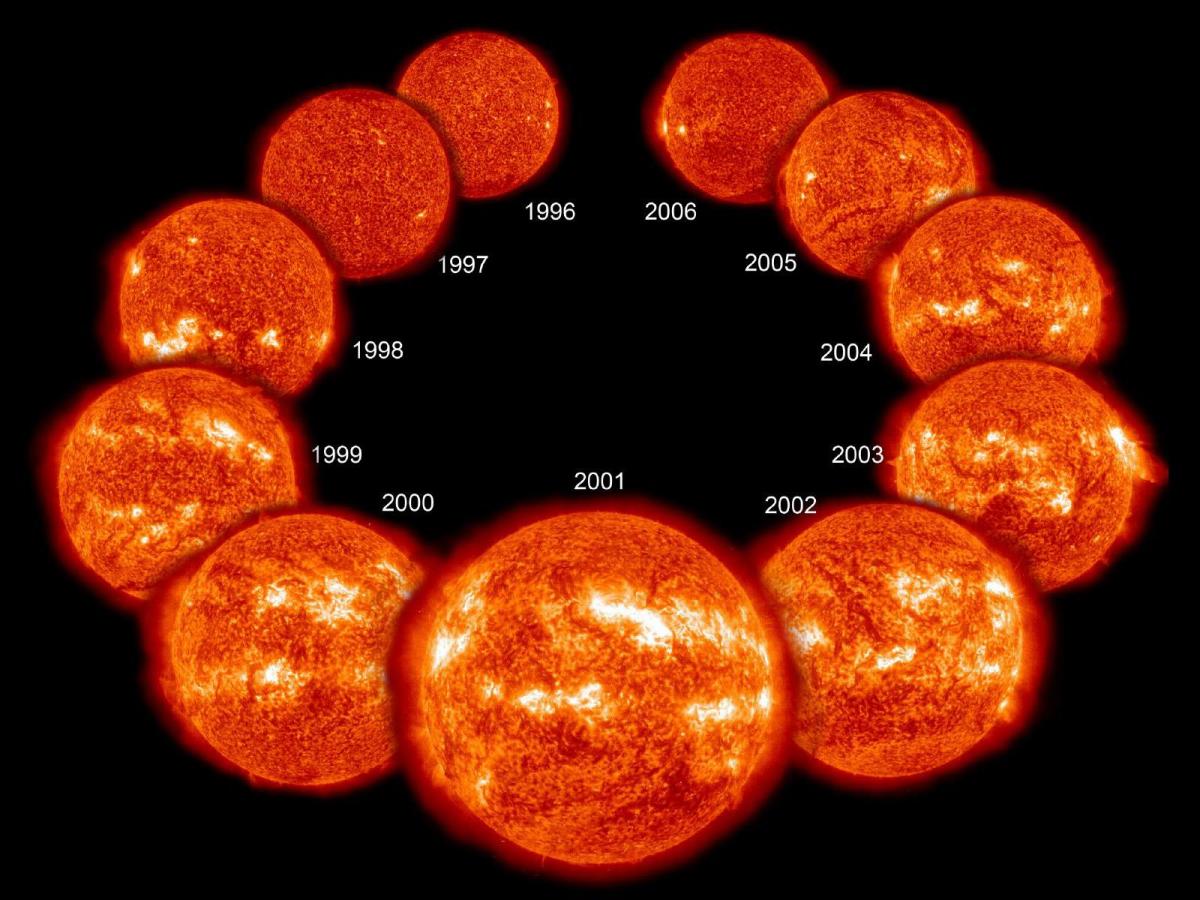 The number of sunspots on our Sun typically ebbs and flows in a predictable 11-year cycle, but one unusual 70-year period when sunspots were incredibly rare has mystified scientists for 300 years. Now a nearby Sun-like star seems to have paused its own cycles and entered a similar period of rare starspots, according to a team of researchers at Penn State. Continuing to observe this star could help explain what happened to our own Sun during this “Maunder Minimum” as well as lend insight into the Sun's stellar magnetic activity, which can interfere with satellites and global communications and possibly even affect climate on Earth.

The star—and a catalog of 5 decades of starspot activity of 58 other Sun-like stars—is described in a new paper that appears online in the Astronomical Journal.

Starspots appear as a dark spot on a star’s surface due to temporary lower temperatures in the area resulting from the star’s dynamo—the process that creates its magnetic field. Astronomers have been documenting changes in starspot frequency on our Sun since they were first observed by Galileo and other astronomers in the 1600s, so there is a good record of its 11-year cycle. The exception is the Maunder Minimum, which lasted from the mid 1600s to early 1700s and has perplexed astronomers ever since.

“We don’t really know what caused the Maunder Minimum, and we have been looking to other Sun-like stars to see if they can offer some insight,” said Anna Baum, an undergraduate at Penn State at the time of the research and first author of the paper. “We have identified a star that we believe has entered a state similar to the Maunder Minimum. It will be really exciting to continue to observe this star during, and hopefully as it comes out of, this minimum, which could be extremely informative about the Sun’s activity 300 years ago.”

The research team pulled data from multiple sources to stitch together 50 to 60 years of starspot data for 59 stars. This included data from the Mount Wilson Observatory HK Project—which was designed to study stellar surface activity and ran from 1966 to 1996—and from planet searches at Keck Observatory which include this kind of data as part of their ongoing search for exoplanets from 1996 to 2020. The researchers compiled a database of stars that appeared in both sources and that had other readily available information that might help explain starspot activity. The team also made considerable efforts to standardize measurements from the different telescopes to be able to compare them directly and otherwise clean up the data.

The team identified or confirmed that 29 of these stars have starspot cycles by observing at least two full periods of cycles, which often last more than a decade. Some stars did not appear to have cycles at all, which could be because they are rotating too slowly to have a dynamo and are magnetically ‘dead’ or because they are near the end of their lives. Several of the stars require further study to confirm whether they have a cycle.

“This continuous, more than 50-year time series allows us to see things that we never would have noticed from the 10-year snapshots that we were doing before,” said Jason Wright, professor of astronomy and astrophysics at Penn State and an author of the paper. “Excitingly, Anna has found a promising star that was cycling for decades but appears to have stopped.”

According to the researchers, the star—called HD 166620—was estimated to have a cycle of about 17 years but has now entered a period of low activity and has shown no signs of starspots since 2003.

“When we first saw this data, we thought it must have been a mistake, that we pulled together data from two different stars or there was a typo in the catalog or the star was misidentified,” said Jacob Luhn, a graduate student at Penn State when the project began who is now at the University of California, Irvine. “But we double- and triple-checked everything. The times of observation were consistent with the coordinates we expected the star to have. And there aren’t that many bright stars in the sky that Mount Wilson observed. No matter how many times we checked, we always come to the conclusion that this star has simply stopped cycling.”

The researchers hope to continue studying this star throughout its minimum period and potentially as it comes out of its minimum and begins to cycle once again. This continued observation could provide important information about how the Sun and stars like it generate their magnetic dynamos.

“There’s a big debate about what the Maunder Minimum was,” said Baum, who is now a doctoral student at Lehigh University studying stellar astronomy and asteroseismology . “Did the Sun’s magnetic field basically turn off? Did it lose its dynamo? Or was it still cycling but at a very low level that didn’t produce many sunspots? We can’t go back in time to take measurements of what it was like, but if we can characterize the magnetic structure and magnetic field strength of this star, we might start to get some answers.”

A better understanding of the surface activity and magnetic field of the Sun could have several important implications. For example, strong stellar activity can disable satellites and global communications, and one particularly strong solar storm disabled a power grid in Quebec in 1989. It has also been suggested that sunspot cycles may have a connection to climate on Earth. Additionally, the researchers said that information from this star could impact our search for planets beyond our solar system.

“Starspots and other forms of surface magnetic activity of stars interfere with our ability to detect the planets around them,” said Howard Isaacson, a research scientist at the University of California, Berkeley, and an author of the paper. “Improving our understanding of a star’s magnetic activity might help us improve our detection efforts.”

“This research is a great example of cross-generational astronomy, and how we continue to improve our understanding of the universe by building upon the many observations and dedicated research of astronomers that came before us,” said Wright. “I looked at starspot data from Mount Wilson and Keck Observatory for my thesis when I was a graduate student, Howard looked at starspot data from the California Planet Survey for his master’s thesis, and now Anna has stitched together all the data for a more comprehensive look across the years. We are all excited to continue studying this and other promising stars.”