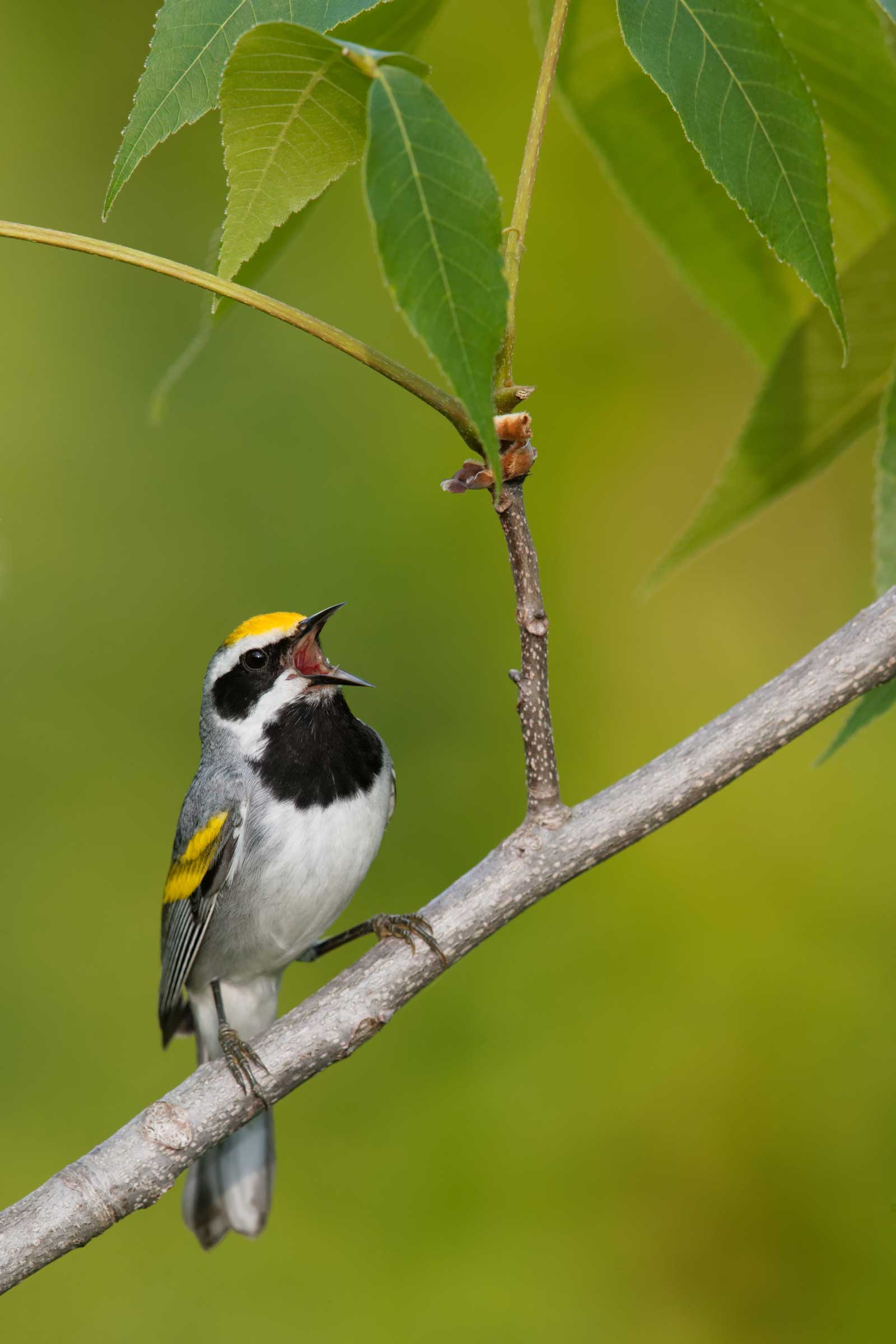 A team of researchers has identified a gene associated with migration in golden-winged and blue-winged warblers using whole genome sequencing and migration tracking technology. The team compared genetic differences among birds that winter in Central America and those that winter in South America. Credit: Jacob Spendelow

A gene newly associated with the migratory patterns of golden-winged and blue-winged warblers could lend insight into the longstanding question of how birds migrate across such long distances.

A new study led by researchers at Penn State and the Cornell Lab of Ornithology is the first to combine whole genome sequencing and migration tracking technology to pinpoint a single gene associated with the complex suite of traits that determine migratory behavior. These findings may have important conservation implications for the declining populations of golden-winged warblers. The paper appears online in the journal Proceedings of the National Academy of Sciences and describes the gene, which is associated with a neurological disorder in humans.

“The great migrations of the world have been inspiring people for hundreds of years,” said David Toews, assistant professor of biology at Penn State and leader of the research team. “The migration of birds is particularly fascinating because small species primarily navigate alone, at night, and at high altitudes, so people do not always see it happening. They are in your backyard, and then they are gone.”

Migration programming in birds is incredibly complex, encompassing a suite of neurological, physiological, and behavioral traits. Researchers have known for a few decades that there is a genetic component to migration. Recent studies in birds have identified large regions of the genome, encompassing hundreds of genes, associated with migration, but it has been more difficult to pinpoint the specific roles of any single gene.

“In this study, we found only one gene associated with the final wintering destination of golden-winged and blue-winged warblers,” said Toews.

The researchers studied migration patterns in golden-winged warblers and blue-winged warblers, genetically-similar species that breed in the Midwest and northeastern United States. Some birds of each species migrate to wintering grounds in Central America, from Panama to Guatemala, while others travel further to South America, primarily Venezuela. Birds will usually return to similar breeding grounds and wintering sites each year.

Members of the research team from the University of Toledo previously determined the specific locations where these birds were wintering. They placed geolocators, essentially small backpacks with light sensors, on birds caught at breeding grounds in the U.S. The geolocators recorded light levels of their environment, which the researchers analyzed when the birds were captured the next year at their breeding sites. 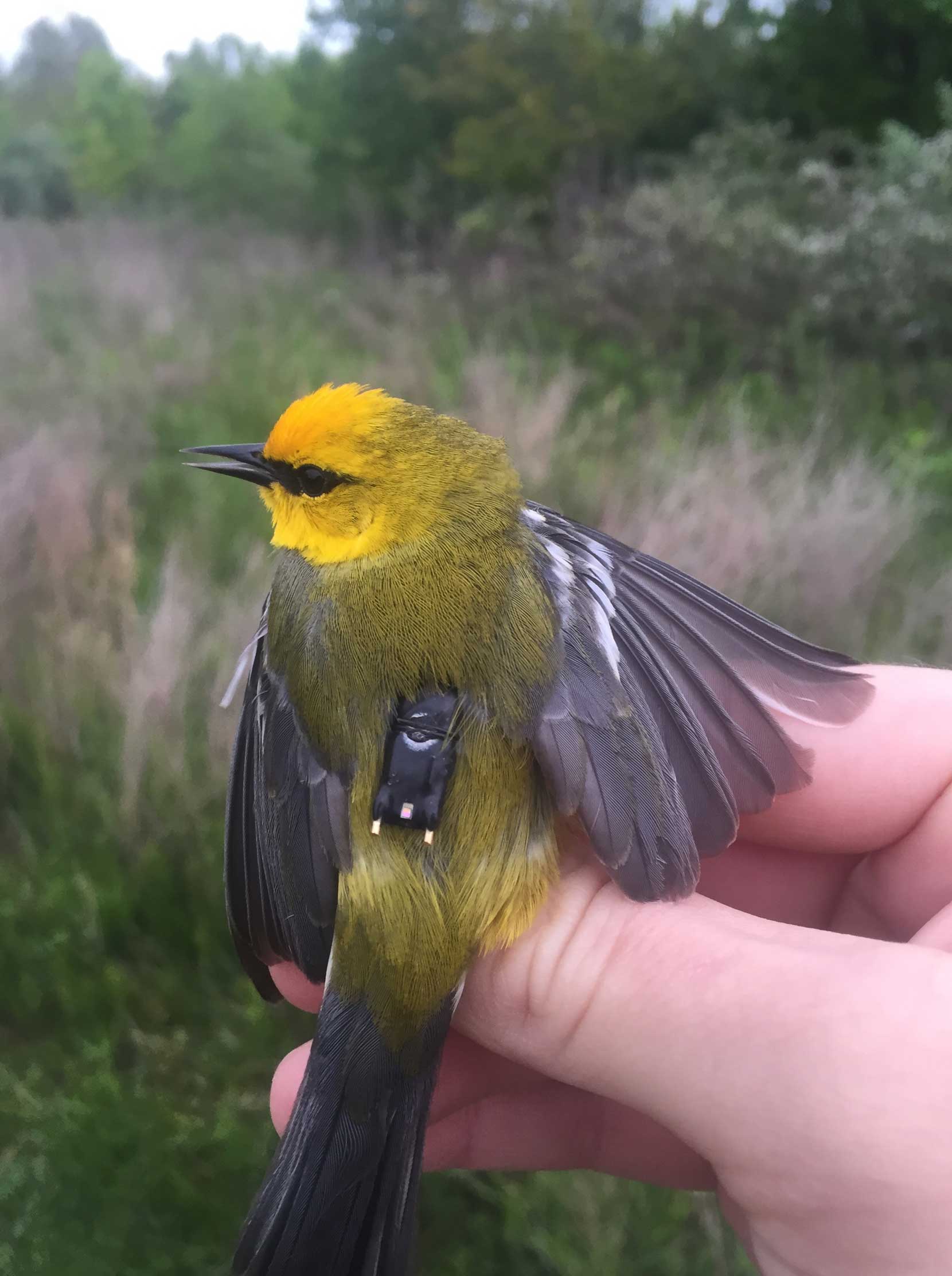 The research team placed geolocators, essentially small backpacks with light sensors, on the birds’ backs, allowing the researchers to approximate location of birds along their migration track and at their wintering grounds. Credit: Gunnar Kramer

“These light levels allow you to calculate the approximate location of birds along their migration track and at their wintering grounds, based on sunrise and sunset times and a few other factors,” said Henry Streby of the Toledo team. “This information is particularly important for conservation management of golden-winged warblers, whose numbers are rapidly declining in the Appalachian Mountains. Conservation efforts have focused on protecting the breeding grounds, which is important, but declines also appear strongly related to habitat alteration and destruction in the wintering grounds."

"The global attention on the fires in the Amazon highlights the importance of these South American habitats, and these migratory birds illustrate an inextricable link between hemispheres," said Toews.

Importantly, the team from Toledo took genetic samples from the migrating birds, which allowed the group to investigate genetic differences between birds that winter in Central America and those that winter in South America. The majority of these differences occurred in a small region on the bird’s Z chromosome, a sex-determining chromosome like the X and Y chromosomes in humans. Only one gene, called VPS13A, was present in this region.

Although the gene does not yet have any known function in birds, in humans it is associated with the neurodegenerative disorder chorea-acanthocytosis, which affects movement.

“As we come to better understand the role of this gene in humans, we may also gain important insights to its role in migration in birds,” said Toews. “This is very speculative at this point, but we think it could be involved in clearing reactive oxygen species, which are free radicals that can build up during a prolonged migration and damage cells. We would like to perform additional studies to know when and in what tissues this gene is expressed in these birds. But because golden-winged warblers are facing declines, we may first investigate whether this gene is associated with migration in any of the other 50 or so migratory species of warblers, which may provide a more tractable way to study the gene.”

According to the researchers, the gene appears to be a target of natural selection in birds that winter in South America.

“And that’s really cool, because we don’t always see natural selection operating on contemporary timelines for something like migratory traits that have been around for a long time.”