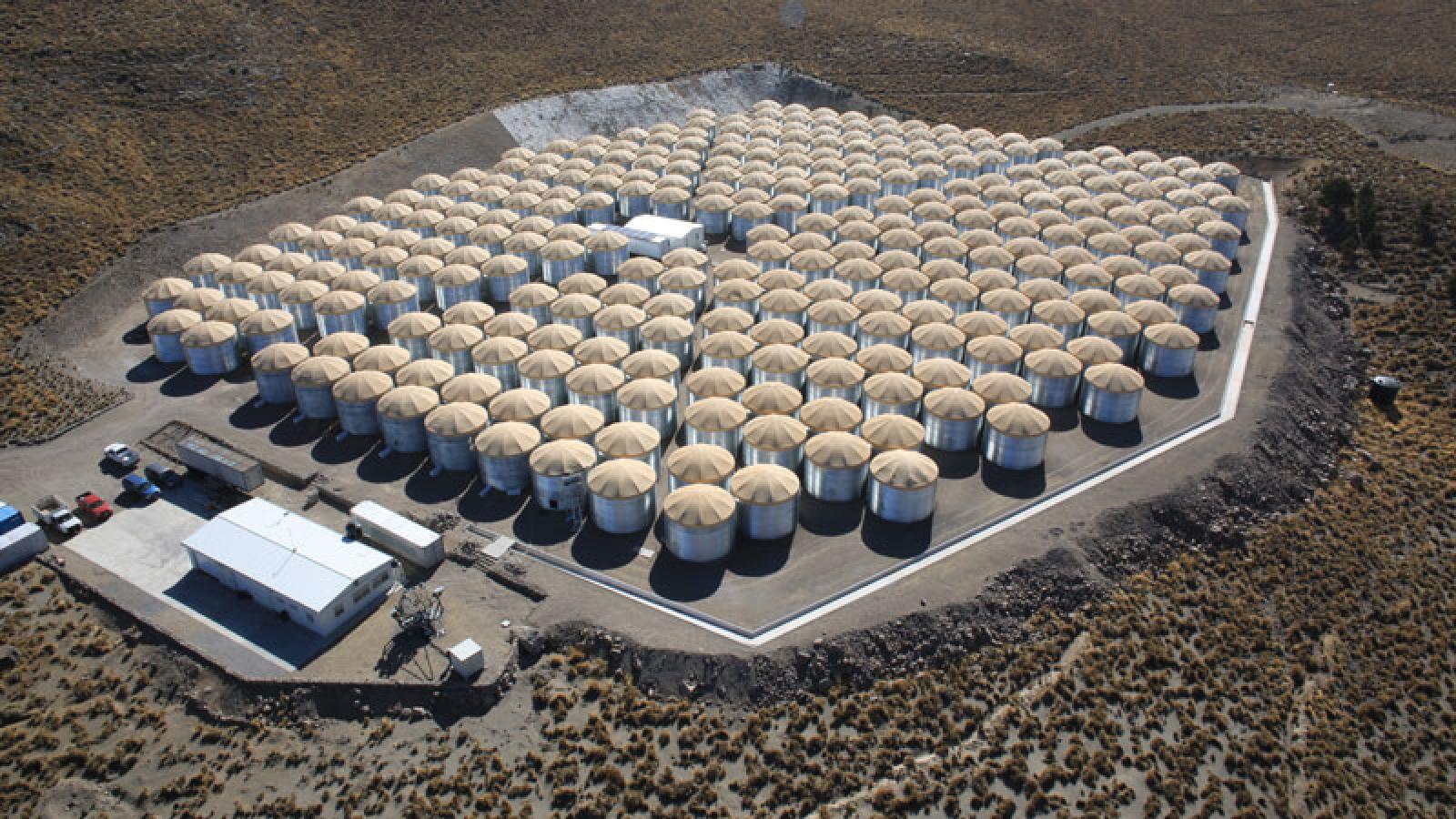 News and Research Spotlights
The international HAWC team, including Penn State researchers, has identified a host of galactic sources of super-high-energy gamma rays 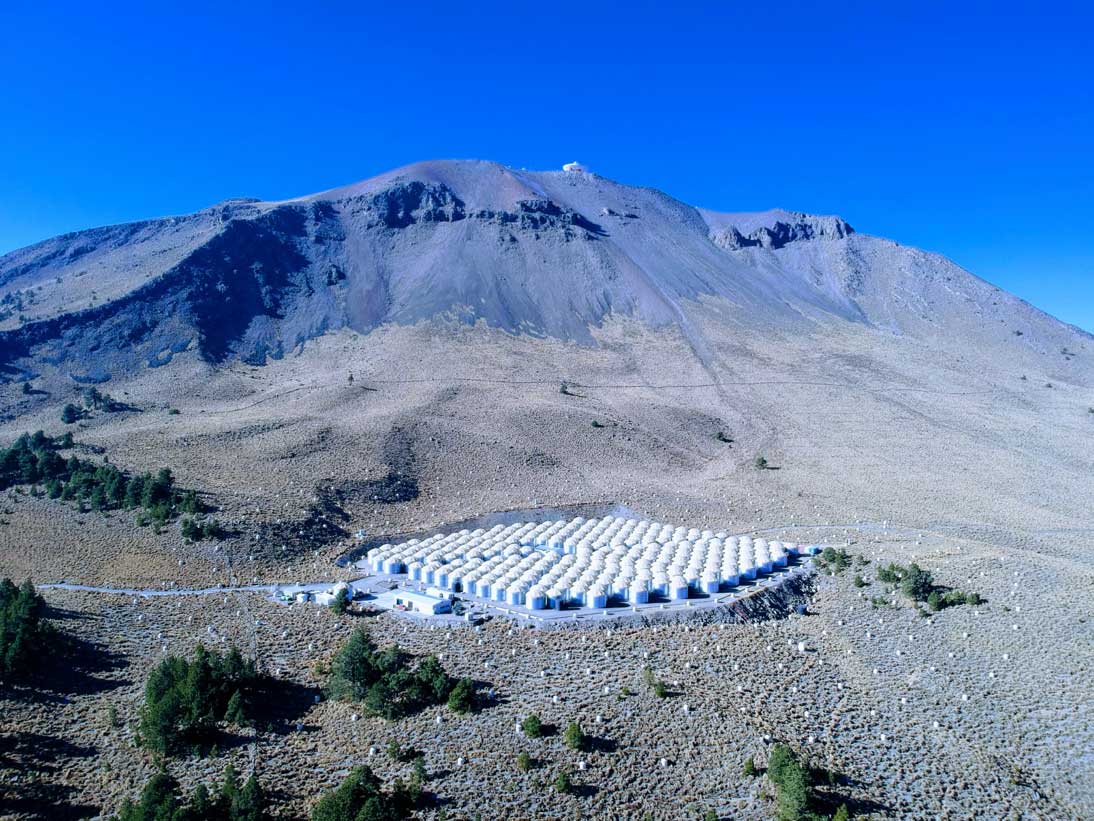 The cosmic sources of nine extremely high-energy gamma rays have been identified by members of the High-Altitude Water Cherenkov (HAWC) Gamma-Ray Observatory collaboration, including Penn State scientists. All of the sources identified produce gamma rays with energies over 56 trillion electron volts (TeV) and three emit gamma rays extending to 100 TeV and beyond, making these the highest-energy sources ever observed in our galaxy.

These sources constitute a new catalog that will help explain where the particles that produce high-energy gamma rays originate and how they are accelerated to such extreme velocities. It may also provide important insight into the origins of cosmic rays—high energy particles that rain down on Earth’s atmosphere and may cause electronic problems in satellites and other machinery.

“The Earth is constantly being bombarded with charged particles called cosmic rays, but because they are charged, they bend in magnetic fields and don’t point back to their sources,” said Kelly Malone, an astrophysicist in the Neutron Science and Technology group at Los Alamos National Laboratory and a member of the HAWC scientific collaboration. “We rely on gamma rays, which are produced close to the sources of the cosmic rays, to narrow down their origins.”

Malone developed a new method to determine the energy of gamma rays on an event-by-event basis as part of her doctoral research at Penn State under the supervision of Miguel Mostafá, professor of physics and of astronomy and astrophysics at Penn State and a member of the HAWC collaboration. The method takes advantage of improved techniques developed and implemented by the Penn State HAWC group to reconstruct cosmic events and reject background detections that are not part of the focal event.

The results are described in a paper that appears online January 15 in the journal Physical Review Letters.

A map of the galactic plane indicates the highest-energy gamma ray sources yet discovered. The sources comprise a new catalog compiled by the members of the High Altitude Water Cherenkov Observatory collaboration, which includes Penn State researchers.

The newly cataloged astrophysical gamma-ray sources have energies about 10 times higher than can be produced using experimental particle colliders on Earth. While higher-energy astrophysical particles have been previously detected, this is the first time specific galactic sources have been pinpointed. All of the sources have extremely energetic pulsars (highly magnetized rotating neutron stars) nearby. The number of sources detected may indicate that ultra-high-energy emission is a generic feature of powerful particle winds coming from pulsars embedded in interstellar gas clouds known as nebulae, and that more detections will be forthcoming.

The HAWC Gamma-Ray Observatory consists of an array of water-filled tanks sitting high on the slopes of the Sierra Negra volcano in Puebla, Mexico, where the atmosphere is thin and offers better conditions for observing gamma rays. When these gamma rays strike molecules in the atmosphere they produce showers of energetic particles. Although nothing can travel faster than the speed of light in a vacuum, light moves more slowly through water. As a result, some particles in cosmic ray showers travel faster than light in the water inside the HAWC detector tanks. The faster-than-light particles, in turn, produce characteristic flashes of light called Cherenkov radiation. By recording the Cherenkov flashes in the HAWC water tanks, researchers can reconstruct the sources of the particle showers to learn about the particles that caused them in the first place.

“There are still many unanswered questions about cosmic-ray origins and acceleration,” said Malone. “High energy gamma rays are produced near cosmic-ray sites and can be used to probe cosmic-ray acceleration. However, there is some ambiguity in using gamma rays to study this, as high-energy gamma rays can also be produced via other mechanisms, such as lower-energy photons scattering off of electrons, which commonly occurs near pulsars.”

The HAWC collaborators plan to continue searching for the sources of high-energy cosmic rays. By combining their data with measurements from other types of observatories such as neutrino, x-ray, radio, and optical telescopes, they hope to disentangle the astrophysical mechanisms that produce the cosmic rays that continuously rain down on our planet.

Mostafá joined the HAWC collaboration in 2009 and participated in the initial proposals that were funded by the National Science Foundation to build the HAWC Observatory. The full array with 300 water-Cherenkov detectors (WCDs) was completed in 2015. The Penn State group played an essential role in the construction of the HAWC Observatory, including the fabrication the 300 light-tight bladders that hold the 50,000 gallons of ultra-pure water in each WCD, and the mounts and deployment tools for the light detectors. They supervised the successful deployment of the 300 WCDs, developed and maintained the online system, implemented an alert system, and analyzed the calibration data. In addition to their continued participation in the operation and maintenance of the water Cherenkov detectors, the online system, and the time and charge calibration of the light detectors, the Penn State group has developed and implemented improved event reconstruction and background rejection techniques. The Penn State group also led the development of the production software, which allows reconstruction of an event in real time. This software is the basis of all real-time analyses and all HAWC publications.