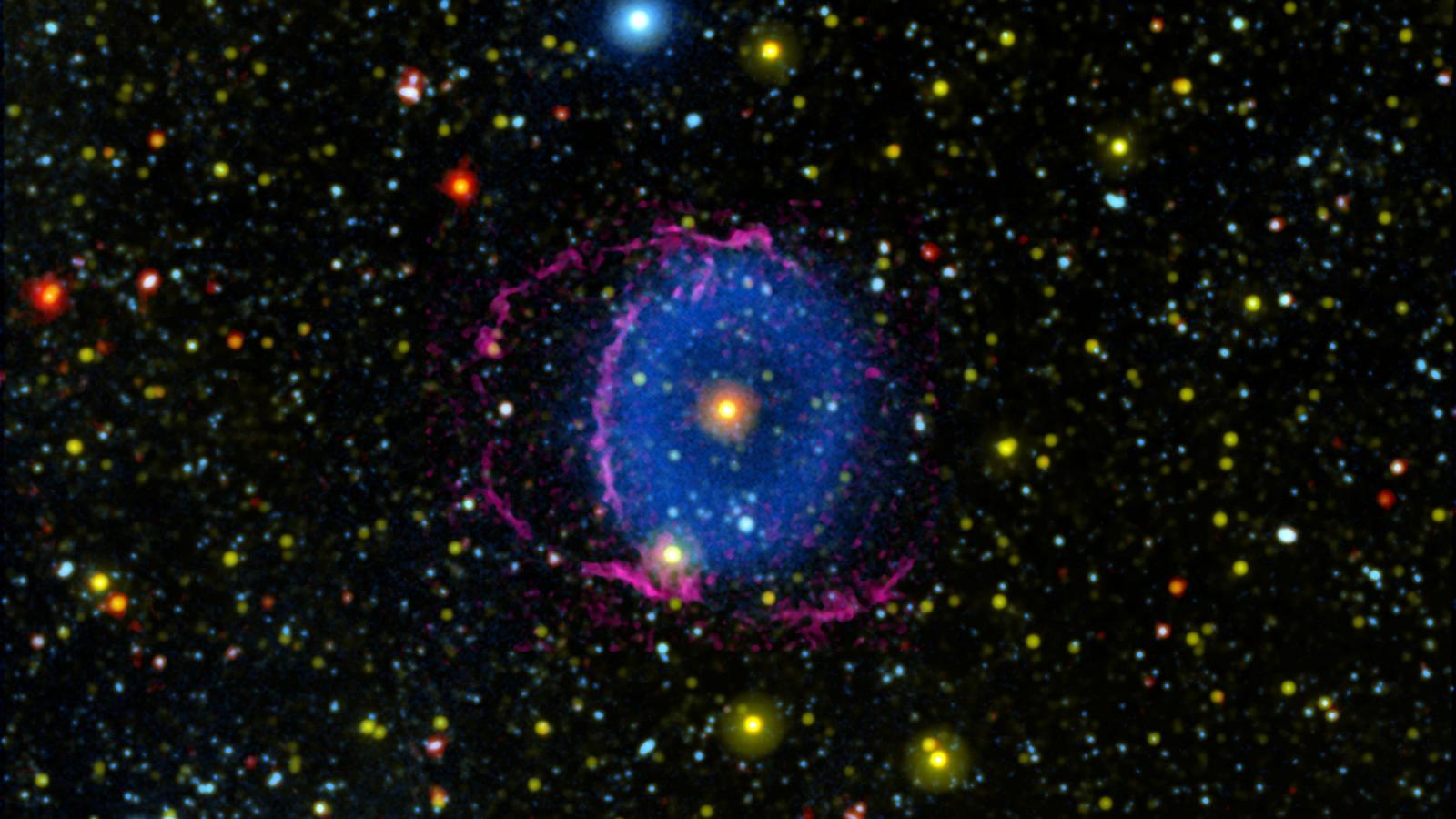 News and Research Spotlights
The Blue Ring Nebula, which perplexed scientists for over a decade, appears to be the youngest known example of two stars merged into one

Astronomers may have finally cracked the case of the unusual blob of gas that has mystified researchers for more than 16 years. An international team that includes Penn State scientists has applied cutting-edge theoretical models to the smattering of data that has been collected on this object, nicknamed the Blue Ring Nebula, and posits the nebula — a cloud of gas in space — is likely composed of debris from two stars that collided and merged into a single star.

The nebula was spotted in 2004 by scientists with NASA's Galaxy Evolution Explorer (GALEX) and was unlike any they'd seen in our Milky Way galaxy: a large, faint blob of gas with a star at its center. In the GALEX images, the blob appeared blue — though it doesn't actually emit light visible to the human eye — and careful observations identified two thick rings within it. Over the next 16 years, astronomers studied the Blue Ring Nebula with multiple Earth- and space-based telescopes, but the more they learned about it, the more mysterious it seemed.

“In 2018 we observed the Blue Ring Nebula with the Habitable Zone Planet Finder (HPF) on the 10m Hobby-Eberly Telescope to help uncover its mysteries: How did the gaseous material get ejected? What were the properties of the central star?” said Andrew Monson, associate research professor of astronomy and astrophysics at Penn State and an author of the paper. “The spectroscopic data from HPF played a key role in helping us understand this exciting and unusual object.”

With insights from spectroscopic observations coupled with detailed theoretical modeling, the researchers had clued in on a possible explanation: a stellar merger. A paper describing the potential merger appears online Nov. 18 in the journal Nature, and a publicly accessible discussion of the results is available on the HPF blog.

While merged star systems most likely aren't uncommon, they are nearly impossible to study immediately after they form because they're obscured by debris kicked up by the collision. Once the debris has completely cleared — at least hundreds of thousands of years later — they're challenging to positively identify because they mostly look like non-merged stars. The Blue Ring Nebula appears to be the missing link: Astronomers are seeing the star system only a few thousand years after the merger, when evidence of the union is still plentiful, and is the first known example of a merged star system at this stage.

GALEX, which operated between 2003 and 2013 and was managed by NASA's Jet Propulsion Laboratory in Southern California, observed a wide range of ultraviolet (UV) light to identify young stars in other galaxies. Most objects seen by GALEX radiated both near-UV light (wavelengths only slightly shorter than visible light) and far-UV, but the Blue Ring Nebula stood out because it emitted only far-UV light.

The object's size indicated it might have been a supernova remnant, which forms when a massive star runs out of fuel and explodes, or possibly a planetary nebula, the puffed-up remains of a star the size of our sun. But the Blue Ring Nebula still had a living star at its center.

The GALEX team looked at the nebula with two separate telescopes in 2006 and found evidence of a shockwave in the nebula, suggesting the gas cloud had indeed been expelled into space by some kind of violent event around the central star. The data also suggested that that star was pulling a large amount of material onto its surface — creating visible changes in the star's brightness. But where was the material coming from?

“For some time, astronomers thought that perhaps a large planet was being torn apart by the star, emitting this material,” said Gudmundur Stefansson, former graduate student at Penn who is currently a postdoctoral fellow at Princeton University. “But with the data obtained from HPF, we helped confirm there was no such planet orbiting the star.”
More than a decade after the discovery of the Blue Ring Nebula, the team had gathered data on the Blue Ring Nebula system from four space telescopes, four ground-based telescopes, along with historical observations of the star going back to 1895 (in order to look for changes in its brightness over time), and the help of citizen scientists through the American Association of Variable Star Observers. But an explanation for what had created the nebula still eluded them.

While the team seemed to have hit a wall with the Blue Ring Nebula, insights from cosmic merger specialist Brian Metzger of Columbia University and Keri Hoadley, a postdoctoral researcher at the California Institute of Technology reignited the project. They suggested that the Blue Ring Nebula could be the result of a stellar merger, and the theoretical expectations from such an event nicely explained the observed data.

The team concluded that nebula was a relatively fresh stellar merger that likely occurred between a star similar to our sun and a smaller one only about 100 times the mass of Jupiter. Nearing the end of its life, the sun-like star began to swell. As the puffed up outer layers of the larger inched closer to the companion star, the smaller object began to syphon that material away, encircling itself with a disk of gas from the smaller star.

Once the smaller star was pulled into its larger companion entirely, the merger launched a cloud of hot debris that was sliced in two by the disk of gas. This created two cone-shaped debris clouds — their bases moving away from the star in opposite directions, getting wider as they go. The base of one cone is coming almost directly toward Earth and the other almost directly away, forming the two "rings" seen by GALEX.

As the expanding debris traveled into space over millennia, it cooled and formed molecules and dust, including hydrogen molecules that collided with the interstellar medium, the sparse collection of atoms and energetic particles that fill the space between stars. Those collisions destroyed the dust and most of the other molecules that originally formed in the ejected material, but excited the hydrogen molecules and caused them to radiate in a specific wavelength of far UV light. Over time, the glow became just bright enough to be seen by GALEX.

“This was not the type of object I ever expected to observe with HPF,” said Monson. “Its exciting knowing that an instrument we built at Penn State can contribute in ways we hadn’t imagined to explore and discover new things about the cosmos.”