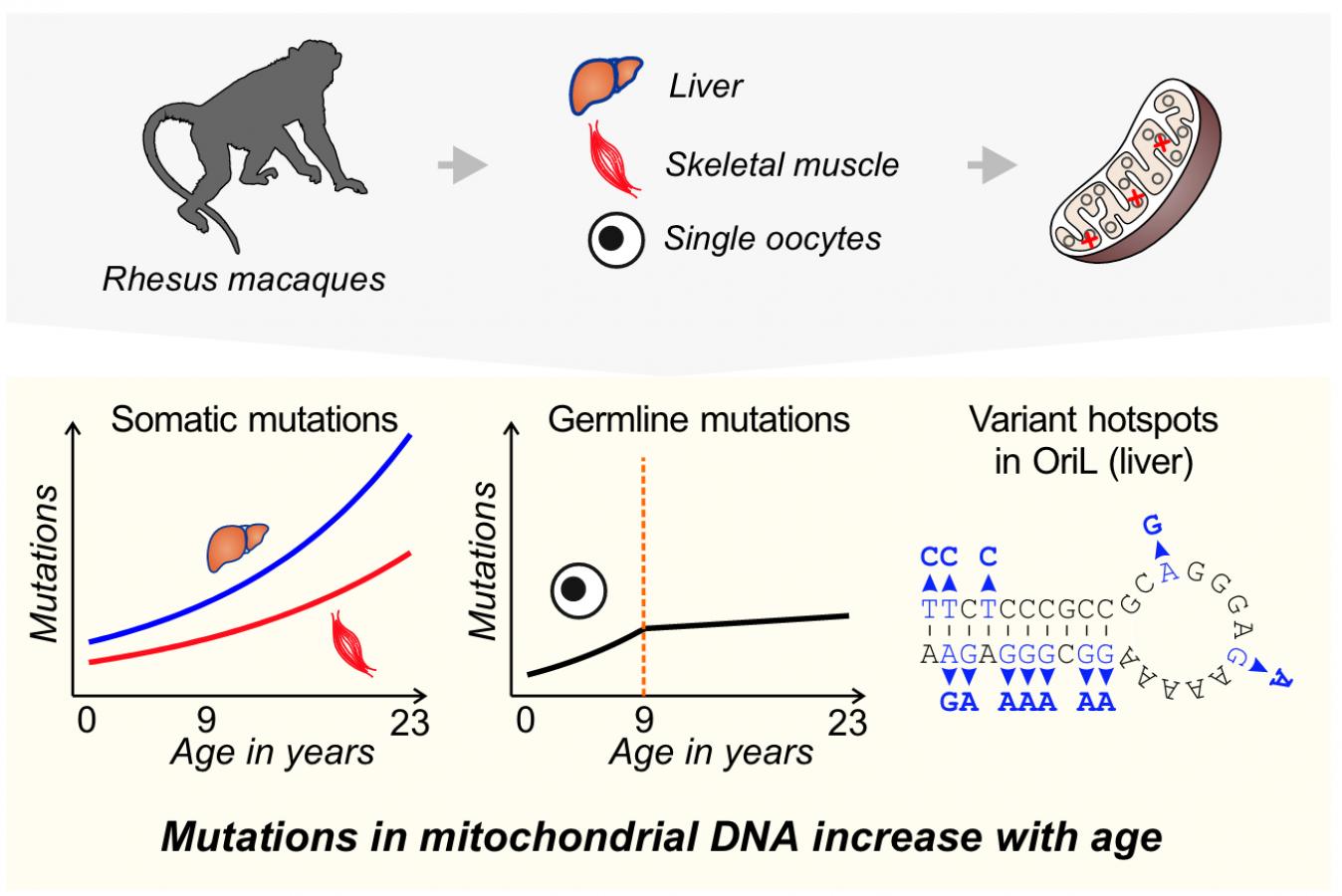 Are egg cells in aging primates protected from mutations?

News and Research Spotlights
A new study shows that mutation frequencies in mitochondrial DNA are lower, and increase less with age, in the precursors of egg cells than in the cells of other tissues in a primate
Sam Sholtis

New mutations occur at increasing rates in the mitochondrial genomes of developing egg cells in aging rhesus monkeys, but the increases appear to plateau at a certain age and are not as large as those seen in non-reproductive cells, like muscle and liver. A new study using incredibly accurate DNA sequencing methodology suggests that there may be a protective mechanism that keeps the mutation rate in reproductive cells relatively lower compared to other tissues in primates, a fact that could be related to the primate—and therefore human—propensity to reproduce at later ages.

A paper describing the study, led by researchers at Penn State, appears online the week of April 4, 2022 in The Proceedings of the National Academy of Science.

Mitochondria are cellular organelles—often called the powerhouse of the cell because of their role in energy production—that have a genome of their own separate from the cell’s “nuclear genome,” which is located in the nucleus and is what we often think of as “the” genome. Mutations in mitochondrial DNA contribute to multiple human diseases but studying new mutations is challenging because true mutations are difficult to distinguish from sequencing errors, which occur at a higher rate compared to the mutation rate for most sequencing technologies.

“To overcome this difficulty, we used a method called ‘duplex sequencing,’” said Barbara Arbeithuber, a postdoctoral researcher at Penn State at the time of the research who is now a research group leader at Johannes Kepler University Linz in Austria. “DNA is composed of two complementary strands, but most sequencing techniques only look at the sequences from one of the strands at a time. In duplex sequencing, we build consensus sequences for each strand individually and then compare the two. Errors are extremely unlikely to happen at the same place on both strands, so when we see change on both strands, we can be confident that it represents a true mutation.”

The team sequenced the mitochondrial genome from muscle cells, liver cells, and oocytes—precursor cells in the ovary that can become egg cells—in rhesus macaques that ranged in age from one to 23 years. This age range covers almost the entire reproductive lifespan of the monkeys. Tissues for the study were collected opportunistically over the course of several years from primate research centers when animals died of natural causes or were sacrificed because of diseases not related to reproduction. Oocytes, and not sperm cells, were used because mitochondria are inherited exclusively through the maternal line.

“From a reproductive biology perspective, oocytes are really interesting and special cells,” said Francisco Diaz, associate professor of reproductive biology at Penn State. “They are generated prior to birth and sit in the ovary for years and years and years, and then a few of them are activated each reproductive cycle. So, you would expect them to accumulate a lot of mutations over that time, but instead we see that they  accumulate mutations for a while and then they do not. This seems to indicate that the germ line—reproductive cells like egg and sperm—may be more resilient than we thought.”

In addition to changes in the rate of mutations over time, the research team also identified variation in mutation frequency across the mitochondrial genome, including several hotspots where mutations occurred much more frequently than you would expect by chance that varied by tissue. One of the hotspots was located in the region responsible for copying of mitochondrial genomes.

“Although it is very challenging to perform a study like this in humans, using a primate model species gives us a close approximation,” said Makova. “Our results suggest that primate oocytes might have a mechanism to protect or repair their mitochondrial DNA, an adaptation that helps to allow later reproduction. The precise mechanism leading to the plateau in mutation frequency in oocytes remains enigmatic, but it might act at the level of elimination of defective mitochondria or oocytes.”

In addition to Makova, Arbeithuber, and Diaz, the research team includes James Hester, Alison Barrett, Bonnie Higgins, Kate Anthony, and Francesca Chiaromonte at Penn State, and Marzia Cremona, a former postdoctoral researcher at Penn State who is now assistant professor at Université Laval in Québec, Canada. The research was funded by the U.S. National Institutes of Health and a Schrödinger Fellowship from the Austrian Science Fund. Additional funding was provided by the Office of Science Engagement in the Penn State Eberly College of Sciences, and the Huck Institute of the Life Sciences and the Institute for Computational and Data Sciences at Penn State.