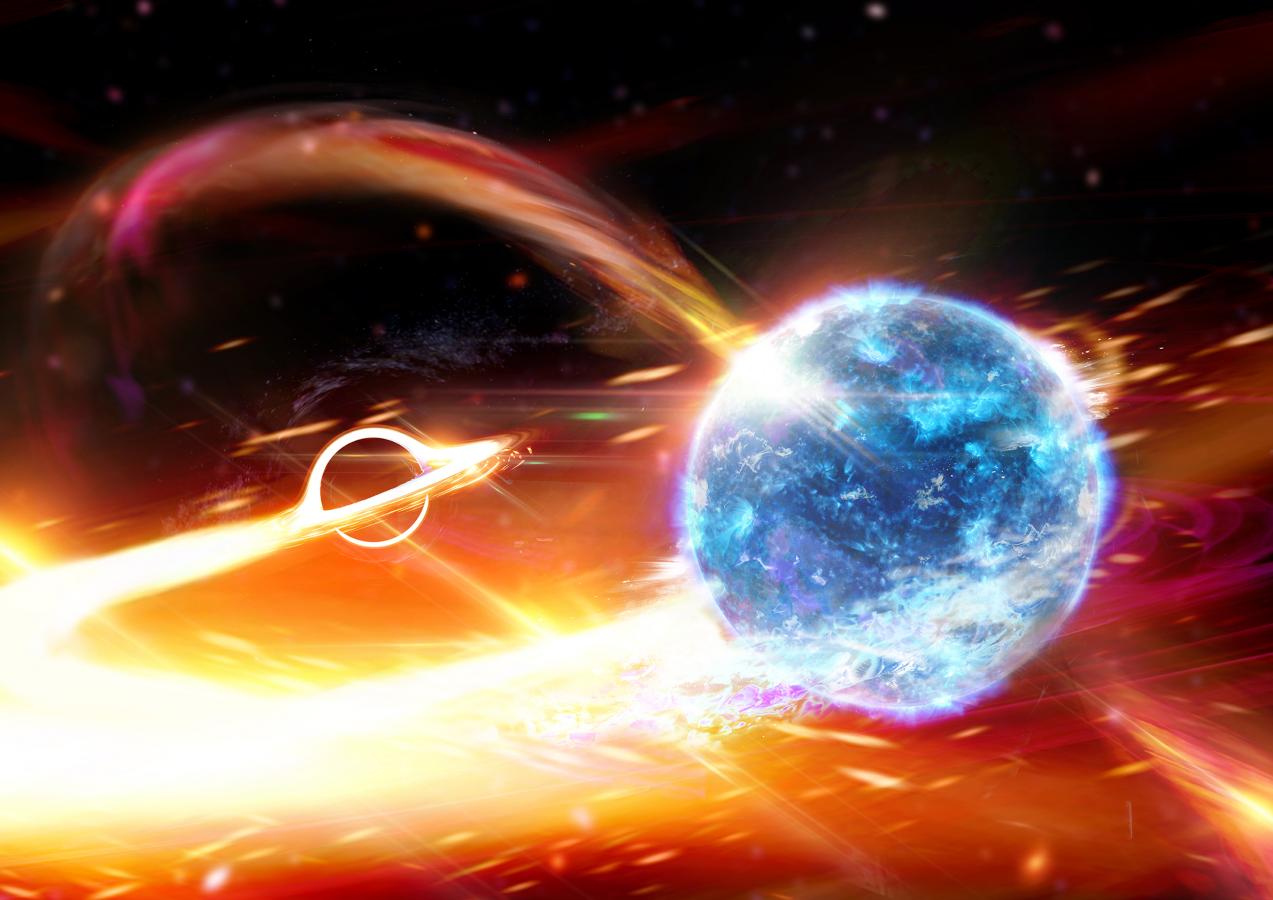 When the most massive stars die, they collapse under their own gravity and leave behind black holes; when stars that are a bit less massive than this die, they explode and leave behind dense, dead remnants of stars called neutron stars. For decades, astronomers have been puzzled by a gap in mass that lies between neutron stars and black holes: the heaviest known neutron star is no more than 2.5 times the mass of our sun, or 2.5 solar masses, and the lightest known black hole is about 5 solar masses. The question remained: does anything lie in this so-called mass gap?

Now, in a new study from the National Science Foundation's Laser Interferometer Gravitational-Wave Observatory (LIGO) and the European Virgo detector, scientists have announced the discovery of an object of 2.6 solar masses, placing it firmly in the mass gap. The object was found on August 14, 2019, as it merged with a black hole of 23 solar masses, generating a splash of gravitational waves detected back on Earth by LIGO and Virgo. A paper about the detection is available in The Astrophysical Journal Letters.

"We've been waiting decades to solve this mystery," said Vicky Kalogera, a professor at Northwestern University. "We don't know if this object is the heaviest known neutron star, or the lightest known black hole, but either way it breaks a record."

This merger was detected in near real time by the low-latency GstLAL matched-filtering search pipeline which is developed and operated largely by the gravitational-wave research group at Penn State.

“One of the most exciting moments of our research is when our phones ring heralding the newest alerts of mergers that have been detected mere seconds ago,” said Surabhi Sachdev, an Eberly Postdoctoral Research Fellow at Penn State and a LIGO team member. “I was about to go climbing at the gym when this particular alert came in. I was thrilled when I saw the masses.”

The cosmic merger described in the study, an event dubbed GW190814, resulted in a final black hole about 25 times the mass of the sun (some of the merged mass was converted to a blast of energy in the form of gravitational waves). The newly formed black hole lies about 800 million light-years away from Earth.

"This is going to change how scientists talk about neutron stars and black holes," said co-author Patrick Brady, a professor at the University of Wisconsin, Milwaukee, and the LIGO Scientific Collaboration spokesperson. "The mass gap may in fact not exist at all but may have been due to limitations in observational capabilities. Time and more observations will tell."

Before the two objects merged, their masses differed by a factor of 9, making this the most extreme mass ratio known for a gravitational-wave event. Another recently reported LIGO-Virgo event, called GW190412, occurred between two black holes with a mass ratio of 3:1. As with GW190412, the unequal masses of the system allowed the scientists to measure higher harmonics, or higher multipoles of gravitational radiation in the underlying signal. This is a wonderful validation of General Relativity which predicts the multipolar structure of gravitational radiation.

"It's a challenge for current theoretical models to form merging pairs of compact objects with such a large mass ratio in which the low-mass partner resides in the mass gap," said Kalogera. “This discovery implies these events occur much more often than we predicted, making this a really intriguing low-mass object. The mystery object may be a neutron star merging with a black hole, an exciting possibility expected theoretically but not yet confirmed observationally. However, at 2.6 times the mass of our sun, it exceeds modern predictions for the maximum mass of neutron stars, and may instead be the lightest black hole ever detected."

GW190814 was initially detected as a loud two-detector event in LIGO Livingston and LIGO Virgo data. LIGO Hanford was not set to be in observing mode due to a routine procedure of the detector even though it was operating stably. Shortly after the detection, researchers reanalyzed the event including the data from LIGO Hanford detector. Having data from three detectors greatly improves the sky localization, which in turn helps the electromagnetic follow up. In this case the new localization was about 20 times smaller than the original localization.

“The reanalysis needed to be as quick as possible after we were told that the data from LIGO Hanford was okay so that we could send updated sky localizations to astronomers not wanting to miss out on precious observing time” said Sachdev.

Dozens of ground- and space-based telescopes followed up in search of potential optical or infrared radiation generated in the event, but none picked up any such radiation. So far, such optical and infrared counterparts to gravitational-wave signals have been seen only once, in an event called GW170817. That event, discovered by the LIGO-Virgo network in August of 2017, involved a fiery collision between two neutron stars that was subsequently witnessed by dozens of telescopes on Earth and in space. Neutron star collisions are messy affairs with matter flung outward in all directions and are thus expected to shine with light. Conversely, black hole mergers, in most circumstances, are thought not to produce light.

According to the LIGO and Virgo scientists, the August 2019 event was not seen in light for a few possible reasons. First, this event was six times farther away than the merger observed in 2017, making it harder to pick up any light signals. Second, if the collision involved two black holes, it likely would have not shone with any light. Third, if the object was in fact a neutron star, its 9-fold more massive black-hole partner might have swallowed it whole; a neutron star consumed whole by a black hole would not give off any light.

“I was shocked when I pulled up GraceDB (Gravitational-Wave Candidate Event Database) to look at the estimated masses,” said Ryan Magee, a graduate student at Penn State and a member of the LIGO group. “One of my primary interests is the formation of compact objects at masses inaccessible to conventional processes, so I was thrilled to see a candidate like this roll in. It will have a profound impact on our understanding of compact objects.”.

How will researchers ever know if the mystery object was a neutron star or black hole? Future observations with LIGO-Virgo and possibly other telescopes may catch similar events that would help reveal whether additional objects exist in the mass gap.

“The collaborations have published catalogs of all events that we have detected with high confidence,” said Becca Ewing, a Science Achievement Mildred Dresselhaus Graduate Fellow at Penn State and a member of the LIGO-Virgo collaboration. “With each observing run, the detector sensitivity increases and these catalogs will include more and more events. In time, we can use them to infer population statistics and better classify events that fall in the mass gap. By studying populations instead of isolated events, we can refine our expectations for future detections and gain a deeper understanding of the unique events we’ve already observed.”

"The mass gap has been an interesting puzzle for decades, and now we've detected an object that fits just inside it," says Pedro Marronetti, program director for gravitational physics at the National Science Foundation (NSF). "That cannot be explained without defying our understanding of extremely dense matter or what we know about the evolution of stars. This observation is yet another example of the transformative potential of the field of gravitational-wave astronomy, which brings novel insights to light with every new detection."

LIGO Research at Penn State is supported by the U. S. National Science Foundation and is conducted within the Institute for Gravitation and the Cosmos and the Institute for Computational and Data Sciences.  Faculty, students, and postdocs in the Penn State LIGO group are members of the Physics and Astronomy and Astrophysics departments within the Eberly College of Science.

A summary of the science of the discover is available on the LIGO website.

Additional information about the gravitational-wave observatories

LIGO is funded by the NSF and operated by Caltech and MIT, which conceived of LIGO and lead the project. Financial support for the Advanced LIGO project was led by the NSF with Germany (Max Planck Society), the U.K. (Science and Technology Facilities Council) and Australia (Australian Research Council-OzGrav) making significant commitments and contributions to the project. Approximately 1,300 scientists from around the world participate in the effort through the LIGO Scientific Collaboration, which includes the GEO Collaboration. A list of additional partners is available.

The Virgo Collaboration is currently composed of approximately 520 members from 99 institutes in 11 different countries including Belgium, France, Germany, Hungary, Italy, the Netherlands, Poland, and Spain. The European Gravitational Observatory (EGO) hosts the Virgo detector near Pisa in Italy, and is funded by Centre National de la Recherche Scientifique (CNRS) in France, the Istituto Nazionale di Fisica Nucleare (INFN) in Italy, and Nikhef in the Netherlands. Click for a list of the Virgo Collaboration groups. More information is available on the Virgo website.