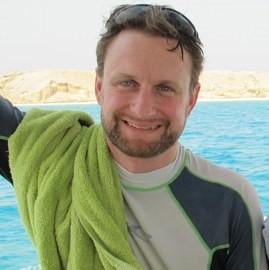 Research in my lab currently focuses on the evolutionary ecology of mutualistic symbioses, mainly coral-dinoflagellate associations. These associations form the basis of one of the most biologically diverse and threatened marine ecosystems on the planet. Through the use of various genetic-based approaches in laboratory and field settings we examine ecological, biogeographic, and phylogenetic patterns in order to deduce fundamental ecological and evolutionary processes involving microbial eukaryotes.  Symbiosis research involves investigations at various biological scales, from the biochemical/cellular to the community/ecosystem level. An applied part of this research seeks to understand how coral communities globally are responding ecologically and evolutionarily to climate warming. The symbionts of corals, Symbiodinium, are ideal for examining broader questions about microbial eukaryotic biodiversity, clonality, sexual recombination, dispersal, speciation, and ecological/physiological specialization, among other topics.

Current topics of research include the following:

We investigate the factors, or drivers, that create biodiversity. Answers to these questions involve the field sampling of various symbiotic cnidarians from a range of reef habitats over various spatial scales of meters to thousands of kilometers to assess the relative significance of population isolation and ecological specialization. We use a hierarchical phylogenetic framework combined with the utilization of population genetic markers to address may biological topics, including the resolution of species boundaries and the impact of selection pressure on host and symbiont populations.

We seek to reveal details about eukaryotic microbial microevolution. Most microorganisms require culturing in order to obtain enough material upon which to conduct population genetic analyses. Corals act as culture vessels and typically harbor a single individual symbiont genotype. Population-level genetic data on Symbiodinium populations offer significant insight into the diversity, dispersal, and speciation in this system and reveal the existence of general processes that likely apply to most “free-living” taxa.

Based on the concept that a holobiont is the sum of its parts, we investigate the functionality of various partner combinations (for example, how do certain host-symbiont combinations influence colony growth rate, fecundity and resilience to thermal stress?), to what extent they differ physiologically, and how these differences influence larger scale ecological shifts and the outcome of evolutionary processes.